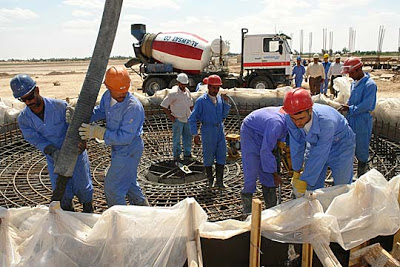 Sewage still runs in the streets of Fallouja, where a new waste collection and treatment system isn’t connected to homes. The report blames military action, changes to plans and skyrocketing expenses.

Reporting from Washington — In one of the most misguided reconstruction projects attempted in Iraq, the U.S. spent nearly $100 million to build a sewage treatment system for the city of Fallouja, according to a government audit report released today.

Sewage continues to run in the streets, and the Special Inspector General for Iraq Reconstruction found that the system may never be properly connected to individual homes, lacks the necessary fuel to operate and is unlikely to ever cover the full city.

In hopes of promoting reconciliation among Iraqi sects, the United States gave the initial order for the sewage treatment system in the summer of 2004, while Sunni-majority Fallouja was under the control of an insurgency. It was not until November of that year that the Marines, in heavy fighting, retook the city.

“It has been said before that reconstruction should have been delayed until military action was completed in this country,” Brian Flynn, the assistant inspector general, said Sunday in an interview from Baghdad. “And this is the most extreme example of reconstruction attempted during hostile operations.”

After the Marines took the city, they kept a tight control on people coming and going. That made rebuilding difficult. Trucks filled with gravel and sand for the project, which comprised a treatment plant, main pipelines and pump stations, had to be laboriously emptied, searched and refilled as the military tried to halt the smuggling of weapons into Fallouja.

But the city still remained violent and dangerous, and trenches dug for the sewer project offered hiding places for bombs.

“The Marines experienced problems with the construction underway,” Flynn said. “Everybody was mutually causing problems for each other.”

In July this year, Ryan Crocker, the U.S. ambassador to Iraq, asked the special inspector general to investigate why the sewer project had “gone so far off track.”

Auditors found that in addition to the security problems it faced, the project was derailed after it was twice redesigned, costs skyrocketed and the U.S. government was paralyzed by “indecision” about what to do.

Once scheduled for completion in January 2006, the project, which had a budget of $32.5-million, now is supposed to be finished in April, while costs have shot up to $98 million.

It was originally to cover all 24,400 dwellings in Fallouja, but will serve only 9,300 houses, about 38% of the city, at a cost of more than $10,000 a home. But despite all the money allocated, no funds have been set aside to connect the homes to the sewer system.

“There is no benefit of this system now,” Flynn said.

The Iraqi government was supposed to pay for the individual connections but now wants homeowners to bear the cost. But the auditors’ report found that homeowners might knock holes through manhole walls and rig their own connections to the sewer, damaging the entire system.

The project did create jobs for residents of Fallouja. The initial contractor, FluorAmec of Greenville, S.C., was removed from the project after a year. That company was replaced with a string of local contractors.

Flynn said it was amazing that as much work on the system got done — thanks, he said, largely to the Army Corps of Engineers.

But he added that the project is in danger. The sewer system needs between 4,800 and 6,000 gallons of fuel a day to run, but fuel is in short supply. If the system, if it becomes operational, were to shut down, sewage would back up into homes within a day.

The full report is available at the special inspector general’s website.