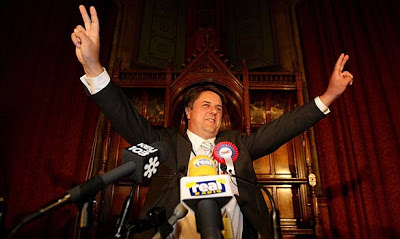 Nick Griffin, leader of the BNP in Great Britain, celebrates as results are announced at Manchester Town Hall. Griffin has a criminal conviction for incitement likely to cause racial hatred. Photo by Dave Thompson / PA.
Hard right on the move in 10 member states of European Union

BRUSSELS — Across Europe, the far right is on the march, claiming increased numbers of seats in ten different member states. However, in Belgium, France and Poland, the far right saw some significant losses as well.

In total, the far right is up eight seats on the 2004 European elections.

In Austria, Denmark, Finland, Greece, Hungary, Italy, the Netherlands, Romania and the UK, the far right made moderate to significant advances.

However, the extreme right saw sharp declines in Belgium, and France, and were completely wiped out in Poland.

“The far right growth is a really bad sign, and this is clearly linked to the economic crash,” Gerry Gable, the editor of Searchlight, a long-standing anti-fascist monthly magazine out of the UK, where the British National Party elected its first-ever MEP, told EUobserver.

“This is the entirely predictable result of the social fall-out of the financial crisis,” he added. “It’s a particularly worrying trend, especially in Austria and the Netherlands.”

Austria as well delivered two seats to the identically named Freedom Party, up one seat from 2004 and winning 13.4 percent of the vote.

The BVO of the late Joerg Haider, a breakaway from the FPO, however was denied any representation in the European Parliament, although it did manage to win the support of 4.6 percent of voters.

Hungary too returned three MEPs from the Movement for the Better Hungary, or Jobbik, on some 15 percent of the vote. The group is the founder of the Hungarian Guard, a paramilitary outfit whose uniforms recall the Nazi youth organisations from Europe’s darkest days.

In Denmark, the anti-immigrant Danish People’s Party, which nevertheless rejects the far-right label, gained an extra seat, up from one.

Finland also delivered up its first hard-right deputy, from the Perussuomalaiset, or True Finns, a nationalist and staunchly anti-EU grouping. The group’s win at the EU level follows on from its successes in domestic elections. In the 2003 parliamentary elections, the party won three seats and in 2007, it won five.

The Greater Romania Party won two seats, up from nil in 2007. Prior to the country’s entry into the European Union, the party did however have representation in the form of five ‘observer’ MEPs. In 2007 however, they lost all MEPs.

Greece’s Popular Orthodox Rally, or LAOS grouping, led by right-wing journalist Georgios Karatzaferis, doubled its representation from one to two MEPs, with around seven percent of the vote.

Italy’s anti-immigrant Northern League also doubled its representation, but from four to eight MEPs. However, the fate of the far right in Italy is difficult to measure, as the two other hard-right parties, the self-styled ‘post-fascist’ National Alliance of Gianfanco Fini, and the neo-fascist Social Alternative of Alessandra Mussolini, merged with Forza Italia in Silvio Berlusconi’s the People of Freedom party earlier this year.

France’s National Front however, lost four seats, down from seven, while the hard-right sovereignist Movement for France of Philippe de Villiers, now branded Libertas under the umbrella of Irish centrist eurosceptic Declan Ganley, also dropped two seats down to one.

“The Front National in France has taken a beating, largely as a result of the governing party taking on some of their rhetoric and Le Pen himself has just gone on too long and accumulated too many convictions,” said Mr Gable. “But the key is the party pulling itself apart in different directions.”

“It’s a similar story in Belgium, where the Vlaams Belang is losing backing to the Lijst Dedecker, but when they begin to pull apart, that’s when they start to suffer.”

The Flemish separatist Vlaams Belang lost one seat and now has only two in the house, while the right-wing populist Lijst Dedecker gained one. Together however, their combined roughly 15 percent of the vote does not match the Vlaams Belangs’ 23 percent of 2004.

Poland saw the biggest drop in the far-right vote, however, which returned 16 right-of-the-right MEPs last time around. This year, not a single one has been elected from either the League of Polish Families or the Self-Defence party.

Mr Gable attributed this to the hard conservatism of the mainstream parties.

“The collapse of the far right is just a sign of how right wing the governing parties have been.”

Finally, while results from the UK have been late to arrive, early projections suggest the British National Party will have at least one seat, from the Yorkshire and Humber region.

The candidate, Andrew Brons, “is a really nasty character and a long-time Nazi activist that has a conviction for an assault on a Black policeman,” said the Searchlight editor.

“He really is the true face of the BNP.”

“It’s very disappointing that they’ve taken any seats in the UK, and there’s still the Northwest and Midlands constituencies to come in and it could be very close there as well.”

[The above is based on preliminary results. Particularly in the case of fringe parties, results are very likely to change in the coming days.] 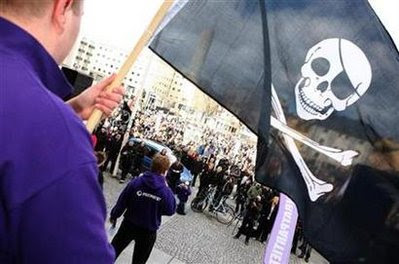 A supporter of file-sharing hub The Pirate Bay, waves a Jolly Roger flag during a demonstration in Stockholm April 18 2009, as Sweden’s Pirate Party chairman and founder Rickard Falkvinge talks to the crowd in the background. Photo by Fredrik Persson / Scanpix / Reuters.

The Pirate Party captured 7.1 percent of votes in Sweden in the Europe-wide ballot, enough to give it a single seat. The party wants to deregulate copyright, abolish the patent system and reduce surveillance on the Internet.

“This is fantastic!” Christian Engstrom, the party’s top candidate, told Reuters. “This shows that there are a lot of people who think that personal integrity is important and that it matters that we deal with the Internet and the new information society in the right way.”

Previously an obscure group of single-issue activists, the party enjoyed a jump in popularity after the conviction in April of four men behind The Pirate Bay, one of the world’s biggest free file-sharing website.

The case cast a spotlight on the issue of internet file-sharing, a technique used to download movies, music and other content. The defendants have called for a retrial.

Despite the similar names, the party and the website are not linked. The party was founded in 2006 and contested a Swedish general election that year, but received less than one percent of the vote.

Engstrom credited the party’s appeal to young voters for its success. “We are very strong among those under 30. They are the ones who understand the new world the best. And they have now signaled they don’t like how the big parties deal with these issues.”

The Pirate Party will take up one of Sweden’s 18 seats in the 785-seat parliament. “We will use all of our strength to defend personal integrity and our civil rights,” Engstrom said.