Feith Is a Criminal Asp – Start the Trial 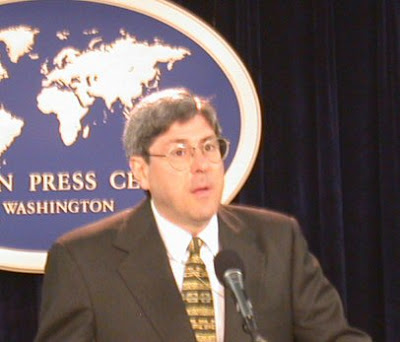 We love the deer-in-the-headlights look of so many members of BushCo these days.

All of this comes with thanks, courtesy of Juan Cole at Informed Comment.

Unless he had a dentist’s appointment late this afternoon, it would be hard for Douglas J Feith to have had a worse Friday. Already, one of the first neoconservative officials to have been jettisoned in the second Bush administration, the former undersecretary of defense for policy – the number three position in the Pentagon – just had his legacy torn apart by an official investigation by the Defense Department’s inspector general. The long-awaited report, released Friday morning, found that a unit set up in Feith’s bureau known as the Office of Special Plans engaged in “inappropriate” intelligence work on the case for war with Iraq.

The Office of Special Plans (OSP) is a murky thing, and, in Washington as well as on the internet, it’s taken on a life of its own. Feith has been right to complain that entire conspiracy theories have sprung up around it – like, according to some perfervid views, the claim that the OSP’s work was an effort to invade Iraq on behalf of Israel. The inspector general’s office didn’t dignify that with a response, but it did confirm, in broad outline, much of what has appeared in investigative reports: that Feith’s office “developed, produced, and then disseminated alternative intelligence assessments on the Iraq and al-Qaida relationship, which included some conclusions that were inconsistent with the consensus of the intelligence community, to senior decision-makers.”

These alternative assessments, developed in late 2001 and 2002, went far beyond the available evidence to assert a connection between Osama bin Laden and Saddam Hussein. Feith’s office further suggested that the intelligence community – which, by and large, didn’t put much stock in the idea of cooperation between Iraq and al-Qaida – was hopelessly myopic. And that, in turn, served an important bureaucratic purpose: crowding out competitors. For instance, Feith’s intelligence analysts presented a briefing on their exaggerated findings to then CIA director George Tenet in August of 2002, in order to delay a CIA assessment on the issue that they considered insufficiently hawkish. Tenet later told a Senate panel that he “didn’t see anything that broke any new ground for me” in Feith’s briefing. But the next month, the OSP analysts took their findings to the White House, and included in their briefing a section that contended there were “Fundamental Problems With How (the Intelligence Community) Is Assessing Information.” The OSP’s analysis was established as the one worth trusting.

The inspector general found that the OSP “inappropriately” pressed a case to senior Bush administration officials – a case that purported to be an intelligence assessment, yet “did not clearly show the variance with the consensus of the intelligence community”. In what is quite a significant understatement, the report says the result was that the OSP “did not provide ‘the most accurate analysis of intelligence’ to senior decision-makers”. And how: in September of 2002, President Bush boldly stated that “you can’t distinguish between al-Qaida and Saddam when you talk about the war on terror.” When the Downing Street Memo warned of “intelligence and facts” being “fixed around the policy” to invade Iraq, it had this sort of thing in mind.

Feith Based Intelligence
by David Swanson

According to numerous reports, the law Rockefeller has in mind is the National Security Act of 1947, which appears to make it illegal to engage in intelligence activities of the sort engaged in by the Pentagon, without notifying Congress.

It’s nice that Rockefeller is consulting with the Vice Chairman. But, this being a democracy, he probably wants to consult with the American people. You can encourage him to get touch on crime by phoning his office at 202-224-1700 or 202-224-6472 or Emailing him here.

And then there’s this from Juan Cole:

Feith came on Wolf Blitzer’s Situation Room Friday and told three lies, for all the world as though he were still in a position to manufacture reality for the rest of us to study, however judiciously. Here is the transcript with the lies corrected.

BLITZER: Did you and Rumsfeld and Wolfowitz and Cheney and Scooter Libby and the president make a mistake?

FEITH: Well, I mean, in the — lots of mistakes were made and lots of right things were done.

BLITZER: In your analysis?

FEITH: The issue here was not that we did an analysis. The issue was we criticized the CIA’s analysis.
===

Feith’s “Office of Special Plans” did not just critique Central Intelligence Agency conclusions. It requisitioned raw intelligence and cherry-picked it for the conclusions Feith was seeking. And, the group itself was not neutral analysts but was rather drawn from the Neoconservative network close to Israel’s Likud Party:

Jim Lobe wrote, “The heads of NESA and OSP were Deputy Undersecretary William Luti and Abram Shulsky, respectively. Other appointees who worked with them in both offices included Michael Rubin, a Middle East specialist previously with the neo-conservative American Enterprise Institute (AEI); David Schenker, previously with the Washington Institute for Near East Policy (WINEP); Michael Makovsky; an expert on neo-con icon Winston Churchill and the younger brother of David Makovsky, a senior WINEP fellow and former executive editor of pro-Likud ‘Jerusalem Post’; and Chris Lehman, the brother of the John Lehman, a prominent neo-conservative who served as secretary of the navy under Ronald Reagan, according to Kwiatkowski.”

Feith decries the “filter” the CIA had put on its intelligence on Iraq. Mr. Feith, that is called “intelligence analysis.” Raw, undigested tips are not intelligence and they can be extremely unreliable if not weighted properly. It then funneled those conclusions to Cheney’s office directly, by-passing real intelligence agencies. Its members also quite illegally briefed high ranking administration officials on the intelligence. See my earlier remarks on all this.

FEITH: Hang on a second.

BLITZER: Are you ready to acknowledge there were no WMDs …

FEITH: You’re not letting me explain the essence of the problem.

FEITH: We did not find WMD stockpiles. We found WMD programs. And the Duelfer report as I’m sure you know, was very clear on what we found in the WMD area, although we did not find the stock piles. We found that he had the facilities, he had the personnel, the intention. So there was a WMD threat but it wasn’t the way the CIA described it.

In fact, the Duelfer report found no sign of chemical, biological or nuclear weapons or any active capacity to produce any of them:
===
“In his final word, the CIA’s top weapons inspector in Iraq said Monday that the hunt for weapons of mass destruction has “gone as far as feasible” and has found nothing, closing an investigation into the purported programs of Saddam Hussein that were used to justify the 2003 invasion. “After more than 18 months, the WMD investigation and debriefing of the WMD-related detainees has been exhausted,” wrote Charles Duelfer, head of the Iraq Survey Group, in an addendum to the final report he issued last fall.”

BLITZER: There wasn’t the stockpiles. What about on the al Qaeda connection?

FEITH: On the al Qaeda connection, George Tenet on October 7th, 2002 wrote an unclassified letter to the chairman of the Senate Intelligence Committee laying out the relationship between Iraq and al Qaeda.

BLITZER: So you believed there was a connection?

Oh, now he has blind faith in the CIA? I thought it was completely unreliable because of its “filters” and had to be contradicted by Abram Shulsky?

BLITZER: But now you know that was now false.

FEITH: I never heard it was false.

Abu Zubayda was debriefed to this effect in 2002, and Khalid Shaikh Muhammad confirmed it on his capture in spring of 2003. Feith as the number 3 man in the Pentagon cannot have been unaware of what they were telling interrogators. He is therefore lying. James Risen wrote in summer 2003,
===
“Al-Qaeda did not work with Saddam Hussein’s Iraqi regime, two of the terrorist network’s senior leaders have told the CIA, intelligence officials say.

Abu Zubaydah, an al-Qaeda planner and recruiter who was captured in March 2002, told interrogators last year that such co-operation had been discussed among the group’s leaders, but was rejected by Osama bin Laden.

The al-Qaeda chief had vetoed the idea because he did not want to be beholden to Saddam, Zubaydah said.

Khalid Sheikh Mohammed, al-Qaeda’s chief of operations who was captured in Pakistan on March 1, has also said in a debriefing that the group did not work with Saddam.

The Bush Administration has not made these statements public, although it has frequently highlighted intelligence reports supporting its claims of links between Iraq and al-Qaeda as it made its case for war.”

BLITZER: You believe Saddam was working with al Qaeda?

FEITH: I believe that what George Tenet published in October of 2002 was the best information on the subject. And as far as I know, that is largely — I mean, there may be — look, I’ve not been in the government the last year and a half.

There may be some more intelligence on that subject. I’m telling you from the time George Tenet published his findings on the Iraq-al Qaeda relationship which is that they had a relationship for 10 years and they talked about various things, bomb making and save haven and other issues, that that was the U.S. government’s best understanding of the subject. I never criticized that in public or in private.

After our littany of complaints, we include this piece from Time‘s Mark Thompson to remind our readers that there’s more to be done:

Feith may have been one of the Bush Administration’s most fervent supporters of war with Iraq but, in truth, he was only a bit player. Indeed, he is the third bit player in the Iraq fiasco to be paying for the sins of his superiors recently. For a couple of weeks now, I. Lewis “Scooter” Libby has been in the dock in federal court in Washington, trying desperately to keep his one-time boss, Vice President Dick Cheney, from being stained by the responsibility for Libby’s chats with reporters and government officials about Valerie Plame’s CIA job. Then, just yesterday, Army General George Casey was raked over the coals by Senators who didn’t think his past 30 months in command of U.S. ground forces in Iraq warrants his elevation to Army chief of staff. While he did get the promotion, the Senate vote of 83-to-14 was the poorest showing for an Army chief since Vietnam. Sen. John McCain, R-Ariz., said Casey should be held accountable for giving Congress too-rosy assessments of the war as the situation there spiraled downward into chaos. “I have questioned in the past and question today a number of decisions and judgments that Gen. Casey has made in the past two and a half years,” McCain said. “During that time, conditions in Iraq have gotten remarkably and progressively worse.”

This trio of woes seems to have a common thread: Underlings snared while trying to please their bosses. It’s almost like blaming the hammer instead of the carpenter for a bent nail. Speaking to the Associated Press, Feith took umbrage at descriptions that his work was “inappropriate.” Said he: “The policy office has been smeared for years by allegations that its pre-Iraq-war work was somehow ‘unlawful’ or ‘unauthorized.'” He has a point: it was the Bush administration that chose Feith’s reports over those generated by its $1 billion-a-week intelligence operation. Feith’s work was most certainly authorized — from the very top.