FILM / Ed Felien : Big Brother With a Dash of ‘Salt’ 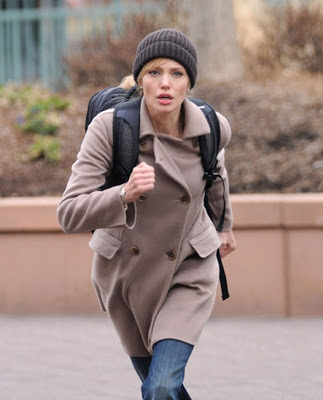 Angelina Jolie as Evelyn Salt: She takes it into her own hands.
Ignorance is Strength:
Perhaps we need a little ‘Salt’!

How often, or on what system, the Thought Police plugged in on any individual wire was guesswork. It was even conceivable that they watched everybody all the time. — George Orwell

Tanya Tucker once sang, “Any kind of love without passion, ain’t no kind of lovin’ at all,” and that’s sort of what’s wrong with Salt, the new movie starring Angelina Jolie as CIA agent Evelyn Salt.

There’s certainly enough action — probably enough action for three or four movies. In the first chase scene she jumps off a bridge onto a semi hauling a trailer, then onto a semi pulling a tanker, then onto a truck. Amazing stunts. Amazing athletic ability. But why should we care? We don’t really know Evelyn Salt, so after a while it’s a little like watching a gymnastics exhibition.

Well, if there’s no depth of characterization and the plot is a string of melodramatic cliffhangers and chase scenes, then what’s the pull of the movie?

Evelyn Salt starts out the film as a tourist captured by North Koreans, being tortured and denying passionately that she is a spy. Then she is traded for a North Korean spy and in the exchange it is revealed she is in fact a CIA spy.

Then in an interrogation of a Russian defector it is revealed that she is a sleeper agent for the Soviets. Then she goes rogue from the CIA so she can totally eliminate the Soviet group. Finally, she’s rogue in both camps but determined to save the world in spite of their intelligence agencies.

She’s a comic book superhero, operating outside the law, hunted by both sides, following her own moral compass — sort of like Batman and Spiderman. The difference for Evelyn Salt is that the bad guys are the intelligence agencies that have been given the power of life or death over everything and everyone, and they’re out of control and Salt is the only one who can set them straight.

That’s what makes the movie so appealing.

On July 19 the Washington Post published a two-year study of the U. S. intelligence community. They found there were 1,271 government agencies and 1,931 private companies gathering intelligence on counterterrorism and homeland security, and 845,000 people holding top-secret security clearance. That seems like a lot of spies when you realize that the population of Washington, D. C. is only 600,000.

Most independent analysts agree, the intelligence community and the Pentagon are out of control. It’s where the bulk of our tax dollars go, and Congress and the President are spending as fast as they can “to protect us from enemies foreign and domestic.”

9/11 was manna from heaven for Halliburton and the military-industrial complex. It gave them a blank check in Iraq and Afghanistan, and it’s giving them even more money for intelligence gathering. Obama, who campaigned against the Patriot Act, now seems to like the idea of domestic spying:

There was of course no way of knowing whether you were being watched at any given moment. How often, or on what system, the Thought Police plugged in on any individual wire was guesswork. It was even conceivable that they watched everybody all the time.” (George Orwell, 1984)

At the Glenn Beck rally Saturday, August 28, Sarah Palin said, “Say what you want to say about me, but I raised a combat vet. You can’t take that away from me.” The Tea Party people want to end entitlement programs like Social Security, Medicare, and Medicaid. They want nothing left but a military budget and 3,000 spy agencies.

They know that FREEDOM IS SLAVERY because to go forward into the unknown is to abandon the sacred institutions of church and traditional authority. Sarah Palin told the crowd: “We must not fundamentally transform America as some would want. We must restore America and restore her honor.”

And they know that IGNORANCE IS STRENGTH. The Original Sin was to eat the fruit from the Tree of Knowledge. At a warm-up rally to the Glenn Beck-a-thon, Minnesota’s own Michelle Bachmann said, “It’s our country; we own it. It doesn’t belong to a cabal of a half-dozen radicals who are determined to reshape this country into an image that none of us would ever begin to recognize.”

The buses that transported Tea Partiers from Bachmann’s rally to Beck’s were paid for by Americans for Prosperity, a lobbying group of the Koch Brothers, whose combined wealth is only surpassed by Bill Gates and Warren Buffet. They own Koch Refineries, and it’s their funding that was responsible for many of the early Tea Party activities. They fund organizations that support Big Oil and the Military-Industrial Complex. They are the merchants of fear and death.

And how do they want to restore America and restore her honor? It can only be done through victory over our enemies. It can only come through a president flying a fighter jet onto an aircraft carrier with a banner saying, “Mission Accomplished” as a backdrop.

In the words of George Orwell, “Always, at every moment, there will be the thrill of victory, the sensation of trampling on an enemy who is helpless. If you want a picture of the future, imagine a boot stamping on a human face — forever.”

And that’s why you have to agree with the CIA man who releases Salt from her handcuffs and says, “Go get ’em.” And Salt pushes loose the door of the helicopter, jumps into the Potomac, swims to shore and runs off through the woods to fight another day.