Posted on September 4, 2010 by Thorne Dreyer 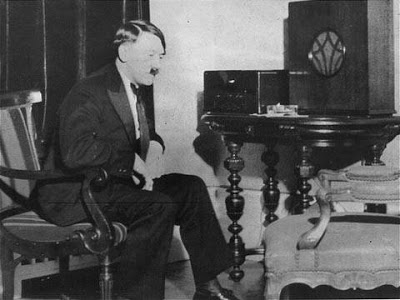 Photo from the USHMM / National Archives / About.com.
What’s a Jew to do (with you)…

…you, in this case, being the arch-conservative Catholic composer, Anton Bruckner, next to Wagner, Hitler’s favorite, whose birthday it is as I write?

I knew I wasn’t supposed to like Bruckner when, in my Jewish-guilt ridden, self-assigned curriculum, I decided to spend a summer listening to and learning all the Bruckner symphonies during my back and forths to Bread & Puppet. But it turns out that the orchestration is such that I often could hear only the upper half of the sound over the interstate tire noise. So I gave up that project, to fill in my Bruckner gap more slowly, as it comes.

For The Education of Arnold Hitler, my novel about a really sweet guy with a really shitty name, I knew I’d have to write a section on Bruckner, so I listened up on the Seventh, and wrote the following. Evelyn Brown, Arnold’s new girlfriend, a performance artist investigating evil by playing at neo-Nazism, and Arnold, have built him a bunker under an on-ramp onto the Bruckner Expressway in the Bronx out of stolen cement blocks and plastic sheeting. They have a bunker-warming for their little love nest as follows:

“Whatcha got for music?” he asked.
“Bruckner, what else?”
“Ah.”
She switched out the light. There was only the ghostly glow of distant streetlamps through the mirror film. Arnold crawled in under the quilt.
“I brought you the slow movement from the Seventh Symphony.” She was somewhat slow herself. “Here.”
She pushed PLAY, and the small room was filled with the rich sounds of low strings and horns in C# minor, a long, sinuous phrase culminating in surprisingly masculine chords, and lapsing back into a gentle feminine ending, serene, consolatory, moving.
“Nice,” he said. “I’ve never heard Bruckner.”
“You told me that. I thought this would be a good place to start.”
“Beautiful, but so sad,” he said, as the melodies spun out of the original germ.
They lay there silent, sipping their glasses as the harmonies and textures grew ever richer, and the keys slipped by until one amazing moment when the music, with a thrilling shock, slips and falls a half-step to climax streaming out on C major, filling the dark room with light.
“Jeezuz!” Arnold muttered,.
The music quieted, and the movement ended with a transfigured major version of the opening funeral music, a majestic threnody framed by the sound of Wagner tubas. They were silent for a long time after it finished.
“The Nazis dug him too,” Evelyn finally said, “his monumental scale, grandiose, lavish, spiritual… They’d play him in Dunkelkonzerte — lights all out, sacred space. Listening to Bruckner was like going to church.”
She snuggled in under the quilt.
“His most famous piece, that,” she murmured. “They played it on German radio after Hitler died, after he was burned to a crisp. Hey, you wake?”
She nudged him. No answer. She pulled off her clothes and lay her body against his as the kitties and bunnies watched the night.

OK, so Hitler and the Pope notwithstanding, Bruckner writes some fabulous music, even for a Jewish ear. So did Wagner, the fulminating-enough antisemite.

Which brings up the larger, long-standing, subtle, difficult question: can one detach an artist’s life from his or her works? Celine is a great writer, but a murderous maniac (as was Gesualdo). Heidegger was IMO the most important philosopher of the 20th century, and ended his inaugural address as rector of Freiburg Universtiy with three “Heil Hitler”s.

What are people, Jews especially, supposed to do with this gorge-rising stuff?

One approach has been “if you can’t beat ’em, recruit them” — as in this scene from my novel, Golem Song. Alan Krieger gives his shiksa German psychiatrist girlfriend a present of Arthur Naiman’s wonderful little book, Every Goy’s Guide To Common Jewish Expressions, Also Recommended for Jews Who Don’t Know Their Punim From Their Pupik. I’ll save you some space: Open the link if you like. It’s pretty funny.

(Nice little side story: when I wrote Arthur, asking for permission to quote his book in mine, he wrote back, “Permission is for goys. Fair use is for Jews,” and gave me… what?… who knows? Anyway a “Sure, go ahead.”)

OK, so Beethoven was Jewish, black jazz heroes are Jewish, all the (Good!) antisemites were Jewish, but what about Netanyahu? Lieberman? the politics of the current state of Israel? Are THEY Jewish?

Here’s what Alan Krieger’s brother writes him — interspersed in a scene from Golem Song in which the Ursula of the link above, takes Alan out to a French restaurant (Alan is very bad at French restaurants).

So, yes, what’s a Jew to do? What are any of us to do? It’s worth writing novels about.

2 Responses to Marc Estrin : What’s a Jew to Do?