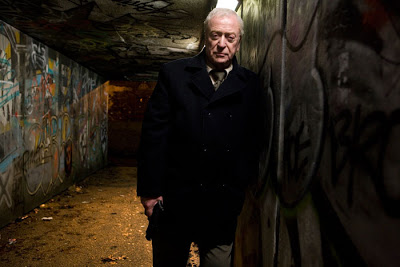 It thrills and titillates without any socially redeeming value. It blames the kids on the streets for the drug war and ignores the manufacturing of violence happening in the suites.

It was 95 degrees and I thought I’d take the afternoon off and slip into an air-conditioned theater and watch Michael Caine romp through Harry Brown. It was a ghastly mistake.

It’s a horror, a pastiche. It has all the sophistication of Reefer Madness in its treatment of drugs. The heroes and villains have the character depth of Batman and Robin. And the “Death Wish” plot is a recycled revenge tragedy that went out of date with the death of Queen Elizabeth I.

That’s not to say the movie isn’t scary. It is. There’s painful tension as we witness scene after scene of escalating violence. There’s horror as we watch gruesome murders and beatings. By the time Harry Brown starts to take on the evildoers you feel you have enough adrenalin pumped to leap tall buildings in a single bound.

But the story is based on an incredible distortion of reality.

The trailer that begins the movie is a grainy black and white phone film of a young man being forced to smoke something (probably crack). In the next scene the young man is on the back of a motor scooter shooting a pistol. A woman pushing a baby carriage sees him and is horrified. She gets out her cell phone and, presumably, starts to call the police. The motor scooter circles her, fires at her. She is shot and drops dead.

What is the film trying to say? That if you smoke one hit of crack you’re going to go out and shoot a mother pushing a baby carriage?

That’s insane. There’s no scientific evidence for that.

But that’s the set-up for the film. That’s the moral lens through which all the action that follows has to be viewed.

Toward the end of the film a gung-ho police chief decides he’s going to make a name for himself by bringing a massive show of force to the projects where the drug dealing and violence is taking place and arrest some of the bad kids.

This final lesson of the film seems to say that it’s impossible to deal with young people and drugs. They’re out of control and there’s nothing we can do about it. It’s a hopeless and depressing ending, and by the time it winds down the film has justified violence, torture, and murder as legitimate ways of getting even.

Is that really the way it is?

Recent events in the Tivoli Gardens section of Kingston, Jamaica, seem to echo the ending of Harry Brown. The Kingston police are trying to arrest and extradite Christopher “Dudus” Coke to the U.S. to face drugs and weapons charges. The people of Tivoli have set up barricades blocking access to their community. Some have run through the community firing weapons killing several officers. Eighteen police stations were under attack and one was set on fire. At least 70 people have died.

Is this just young people on a rampage, like college students in spring? Or is it more serious than that?

It is probably true that Coke heads up the largest criminal enterprise in Jamaica. He is probably guilty of drug dealing and murder in Jamaica and in the U.S. But it is also true that he has given large amounts of money to his community for food, children’s schools, school uniforms, and community centers.

It may be true that much of the armed defense of Coke is probably from his gang, and it may also be true that many in Tivoli might be terrorized by him, but there is also no question that he enjoys wide popular support. For poor people, people without jobs, people without hope, Coke represents their only lifeline of support. That’s why many call him “President,” and some say they’d die for him.

The Prime Minister represents Tivoli in the Jamaican Parliament. He depends on Coke to turn out the vote for him and his Labour Party. He didn’t want to go after him, but he was pressured by the U.S.

The solution to the problem in Tivoli is simple and obvious and almost impossible to bring about. As long as there is poverty and illegal drugs, poor people are going to sell those drugs. The most ruthless and vicious of these poor will quickly organize a syndicate that they will control.

The obvious solution is end poverty (or at least provide an adequate social welfare system) and legalize drugs. By legalizing drugs society would take the profit out of the transaction. It would no longer be profitable to stand on a street corner and sell marijuana when anyone could grow it in their backyard and share it with their neighbors. Heroin and cocaine could be available with a doctor’s prescription in safe and measured doses.

Perhaps the best analysis of the situation in Jamaica is by Betty Ann Blaine in her column “Heart to Heart” in the Jamaican Observer on May 25. It is titled “Corruption, criminality, chaos.”

The end of Michael Manley’s experiment with democratic socialism in the ’70s simultaneously signaled the end of the chapter of national sacrifice and the closure of the book on collective responsibility. The period of the ’80s ushered in a new era of individual aggrandizement and vulgar self-interest that was distinctly different from what existed before. It became common talk that the days of politicians being poor under the Michael Manley regime were over and that it was “black man time to make money.”

What transpired from that time until now has been a story of unfettered greed with the attendant characteristics of political corruption and widespread complicity throughout all sectors and branches of the society. As the tentacles of corruption spread, they formed natural attachments to public officials, the police and private citizens, and a governmental and institutional structure already porous and fraught with weaknesses and loopholes fell victim to deep and widespread skullduggery.

It could be easily argued that Dudus Coke himself is a victim of a vicious political system. When the legitimate government divested itself of its role and responsibilities to the citizens of the country, it opened the door for illegitimate rule, and area leaders and dons walked in. The country could not have had a Dudus Coke without a corrupt political system, and while Coke must take personal responsibility, the truth is that the system encouraged and facilitated his ascendancy to power.

At one point in the movie, Harry Brown assassinates a drug lord, and the police response is, “He’s doing us a favor.” That seems to be the primary mission of Harry Brown. It’s also the mission of Jamaican Prime Minister Bruce Golding, after prodding by the Obama Administration (and in spite of the evidence of extended telephone conversations between Coke and the Golding Administration).

But who are the drug lords here? The wholesaler in Harry Brown who is delivering product for street gangs to retail and Dudus Coke are small fry compared to the international cartels that make it all happen.

And who’s the biggest drug dealer in the world? Why, we are! The United States by sending troops to Afghanistan to protect the poppy crop is responsible for the distribution of 90% of the world’s heroin. By supporting the narco-state of Albania we’re making sure the heroin gets safe passage into Europe.

On his way out of office, George W. Bush pinned a medal on Alvaro Uribe Vélez to recognize his outstanding work as head of the government of Colombia. This is the same Uribe whose campaign manager (while Uribe was Mayor of Medellin and friends with Pablo Escobar) was caught smuggling more than 100,000 pounds of a chemical agent used to make cocaine out of cocoa leaves. It is accepted by most observers that Uribe is the principal force behind the export of cocaine into this country and the world.

What is the connection of the CIA and the Bush family to the international drug trade? Before it was the CIA, the OSS made a deal with Lucky Luciano during World War II. They agreed to get him out of federal prison and help him with the distribution of heroin in the U.S. if he would get the Mafia to assist U. S. troops in the invasion of Sicily. The Allies successfully invaded Sicily and got a toehold on Europe, and the Mafia has been a partner with the government in international relations ever since.

George H. W. Bush was appointed head of the CIA in 1976. With the fall of Saigon on April 30, 1975, the role of the CIA in arranging for transport of heroin from Southeast Asia had been severely impaired. During the Vietnam War, Colonel Ollie North was the principal contact with the Meo or Hmong Tribesmen who supplied opium from the Golden Triangle of Burma, Laos and Thailand. He took over the distribution system developed by the French and continued the shipments of opium to Marseilles for chemical conversion into heroin.

Bush had earlier probably played an important role in the Bay of Pigs invasion of Cuba. The invasion left from an island he had rented on two boats named Houston and Barbara. So Bush was probably a longtime CIA operative.

Bush and Ollie North got together again in the basement of the White House when Bush was Vice President under Reagan, and Bush was Director of Special Operations with North as his Chief of Staff. That’s when Ollie cooked up the cocaine for cash for guns trade that supplied arms to the Contras trying to overthrow the government of Nicaragua.

They smuggled cocaine into the U.S. on CIA planes to a secret air base in Florida, sold the drugs (probably to a Mafia contact), used the cash to buy Russian made guns in Iran, brought the guns to an air base in Honduras and traded the guns for cocaine with the Contras.

When he was asked about his role in this operation, Bush said, “I was out of the loop.” That’s crazy. He was holding the loop, like Will Rogers holding a lariat and jumping in and out of it while telling jokes.

But the son outdid the father. Just like with the Mafia in Sicily, Bush Junior got the CIA to line up support from the opium warlords who had been put out of business by the Taliban. The opium warlords and Karzai from Unocal (Karzai’s brother is allegedly the head of opium production and distribution in Afghanistan) now run Afghanistan as a narco-terrorist state. Along with Albania and Colombia, they represent Bush’s actual axis of evil.

Harry Brown is pornography. It thrills and titillates without any socially redeeming value. It blames the kids on the streets for the drug war and ignores the manufacturing of violence happening in the suites. It’ll be nice when the movies grow up and get real.