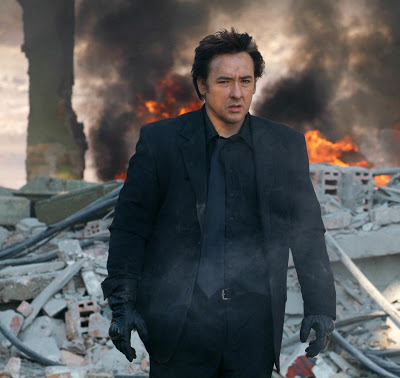 John Cusack stars as a hit-man Brand Hauser in war-torn Turagistan in War, Inc.
Cusack’s Savage Satire Strikes a Chord
with Soldiers and Their Families
By Arianna Huffington / June 12, 2008

“Whose top advisers are linked to war profiteers?” asks John Cusack in a new TV ad linking John McCain and George Bush (“Both…Bet you can’t tell them apart”). The ad, produced by MoveOn.org, starts airing today and is already being passed around the Internet.

Cusack’s righteous rage over the billions being pocketed in Iraq by companies like Blackwater, Halliburton, and Bechtel is the beating heart of his brilliant War Inc. The film, a corrosive, audaciously funny takedown of the Right’s push toward privatized war, has become a surprise, grassroots-driven hit — despite having almost no ad money behind it.

I saw the film before it was finished, and even before the final edit, the music, etc., I was overwhelmed by how it captured the insanity going on in Iraq. War Inc. has pulled off the near-impossible: it has a found a savage, reality-altering humor amidst the tragedy of Iraq.

It masterfully wields my favorite creative weapon: satire. It punches you in the gut, making you laugh, wince, and become outraged all at the same time. Naomi Klein rightly calls War, Inc. “one of those rare satires with the danger left in.”

Political satire designed to confront the powers-that-be with painful truths and to produce not just laughs but change is rarely seen in today’s multiplexes. And that’s not surprising; it’s a high-wire act few even dare to attempt. But when someone does and succeeds at it — think Stanley Kubrick, Paddy Chayefsky, Joseph Heller, Billy Wilder — the effect is indelible.

Lewis Lapham identified the satirist’s project as “the crime of arson, meaning to set a torch of words to the hospitality tents of pompous and self-righteous cant.” And that great satirical arsonist Mark Twain wrote that exposure to good satire made citizens less likely to be “shriveled into sheep.”

The great satirists have always been passionate reformers challenging the status quo. “Sometimes,” says Paul Krassner, whose satiric and radical journalism inspired Cusack and his co-creators, “humor is just a way of calling attention to the contradictions or the hypocrisy that’s going on officially. … That’s the function of humor — it can alter your reality.” Which is exactly what War, Inc. does.

When in 1729, Jonathan Swift wrote the most famous work of political satire of all time, “A Modest Proposal,” he was seeking to light a fire under the indifference toward the twin Irish crises of hunger and over-population. His proposal was to feed young children to hungry men. “I have been assured,” he wrote, “that a young healthy child, well-nursed, is at a year old a most delicious, nourishing and wholesome food, whether stewed, roasted, baked or boiled; and I make no doubt that it will equally serve in a fricassee or a ragout.”

You can imagine the blowback from those who failed to grasp the satiric point Swift was trying to make. Similarly, the satire-challenged Right has tried to attack Cusack and War, Inc. as (all together now) unpatriotic and a slam on American troops. They’ve also gotten their knickers in a twist, outraged that someone would try to find humor in the death and suffering of U.S. soldiers.

But Cusack’s targets are not our troops but private military contractors, war profiteers, and flag-waving politicians who, as Cusack puts it, support “keeping our troops in harm’s way in Iraq but not the bipartisan G.I. bill of rights to support them when they return home.” (And, yes, he’s talking about you, Messrs Bush and McCain).

Indeed, since the film’s release Cusack has received many moving emails and postings on his MySpace page from soldiers and military family members supporting the film and its message. Their missives run from disappointment to disillusionment and fury over being asked to serve and sacrifice while mercenaries are better paid — and often better treated. 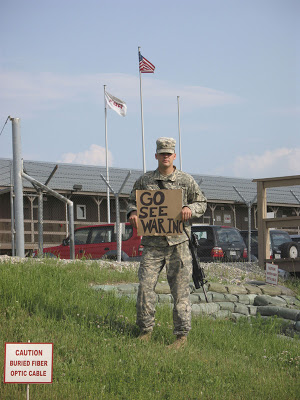 I’m a first-hand witness to the exploitation by KBR and other companies lending their services to the war effort — services us soldiers are fully capable of doing ourselves…. The military is being overcharged by these companies on a regular basis. Also, the poor service and treatment we get from some of their employees who make three times as much as those of us serving our country that are not in it for the money but are trying to make the world a better place for everyone.

From SPC (P) Johnny Rhodes in 3/2 SCR Infantry based in Diyala, Iraq:

After being awake for 3 days I may be a little bit out of it, so excuse any rambling or incoherence on my part. Off the top of my head, I can easily say that KBR in particular is of no help here in my area of Iraq. They do, jobs soldiers could do, get paid way better for it, but the work is almost always substandard…. at any given time there are hordes of these guys tying up the phones and internet, cramming the chow hall, etc. Which makes the soldiers have to wait. And wait. And wait. They also paid way more than me, for a job, I could do with my eyes closed.

From Brenda Clampitt, of Baton Rouge, LA, the wife of a soldier stationed at Camp Adder in Tallil, Iraq:

[My husband] drives the trucks and Humvees and escorts the KBR around where they need to go. He doesn’t understand why they get paid way more then he does when [he and his fellow soldiers] are the ones doing the protecting, and are the ones getting shot at and blown up. He has seen soldiers die in front of him; he has seen lives destroyed and the country torn apart. My husband would serve his country whether he got paid or not, that is just how he is. He loves his country and wants to protect it but he sees first hand what is going on over there and he doesn’t like it…. I myself am sick and tired of this war. It is dragging on and on and it is all about the money. I am not anti war. But I am FOR everything your movie is about.

Today’s lead editorial in the New York Times, titled “Interrogation for Profit,” decries “one of the Bush administration’s most blatant evasions of accountability in Iraq — the outsourcing of war detainees’ interrogation to mercenary private contractors” and calls on Congress to approve “measures to make war-zone contractors liable for criminal behavior.” The editorial concludes: “The way out of the Iraq fiasco must include an end to the outsourced shadow armies.”

This indictment has the same urgency of War Inc. Especially with John McCain reminding us that it’s “not that important” to him when our troops come home.