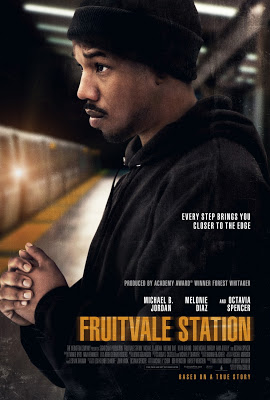 Reviewing Coogler’s Fruitvale Station
and reflecting on the Black Panthers

The only Oakland, California, African-Americans I’ve ever known belonged to the Black Panther Party founded by Huey Newton and Bobby Seale in Oakland in 1966. In my mind, Oakland and the Panthers are as one. I can’t think of the city — its streets, churches, and parks — without thinking of Panthers. And I can’t think of the Panthers without also thinking of the city.

Not surprisingly, no Panthers appear in Ryan Coogler’s 85-minute feature film, Fruitvale Station, which recounts the life and the death of Oscar Grant III, the 22-year-old Oakland African-American who was shot and killed by an Oakland police officer on January 1, 2009.

The slaying of Grant would not have surprised Huey Newton and Eldridge Cleaver, who are, of course, dead and who were well aware of police brutality in their own time, and saw the police as an occupying army in black neighborhoods. I doubt that Bobby Seale and Dave Hilliard, two living Panthers, would be surprised, either, by the murder of Oscar Grant.

The avant-garde American writer, Gertrude Stein, noted apropos Oakland, “There is no there there.” Unfortunately, there is a there there, and, now as in the past, it’s the there of violence and death.

The release of Coogler’s movie, Fruitvale Station, coincided with the verdict in the Trayvon Martin case in Florida. George Zimmerman was acquitted of second-degree murder and manslaughter charges on July 13, 2013. The movie was released July 28, 2013.

News about the trial and the verdict gave the film a boost at the box office and reminded audiences that white officers of the law have been murdering young black men for years and have gotten away with murder, too.

Oscar Grant III might have joined the Panthers had he been alive in 1967 or 1968. Newton and Seale might have tried to recruit him. After all, he’d been to prison — he served time at San Quentin — and he had street smarts. The film depicts him as a well-meaning young man who tries and fails to get his life together.

He’s a fuck-up but he’s not evil. Unable to keep a job, or to tell the truth consistently to friends and family members, he’d like to do the right thing and doesn’t. In the film, he deals marijuana, lies to the mother of his daughter, drives around Oakland in an old car, and hangs out with the boys in the ‘hood.

His family members and his friends care about him and try to help him. They rally around him. They’d like to save his life and bring him back to life after he’s shot and killed.

The film offers a steady stream of images in which Grant and his friends hug one another, high-five one another, and talk the rhetoric of togetherness. They don’t have much tangible togetherness beneath the surface. They don’t go to church together, don’t have a clubhouse, don’t have anything at all that resembles the Black Panther Party, and don’t know a single older person who embodies the legacy of the Panthers.

I didn’t take my eyes off the screen in the theater where I saw the film, but I found Oscar and his friends sad and even pathetic. I don’t doubt that the film accurately reflects Grant’s life. Ryan Coogler had the cooperation of the lawyer for Grant’s family. What I don’t know for sure is how typical or representative a figure Grant was and is.

I suspect that he is rather typical and that a great many young African-American men in Oakland share his sweetness and his anger, his desire to be something better than he is, and who, like him, lack the ability to get out of the traps in which they find themselves.

There’s something fatalist about the film. From the start, you know that he’ll be shot and killed on January 1, 2009; the film begins with documentary footage of his murder. You watch and you know that nothing will prevent that act from taking place.

The movie moves depressingly through Grant’s last day, and, because it’s depressing I can’t really recommend it. At the same time, I wouldn’t say stay away. If you want to see a movie made by a living African-American filmmaker about a dead African-American then by all means see the picture.

The director hasn’t aimed to make a big statement or to offer a plea for change. That speaks well for him. He mostly lets the story tell itself. But he hasn’t lifted his sights as a filmmaker beyond Grant’s individual life and beyond the lives of those in his immediate circle. That struck me as a lapse in filmmaking. It left me with a sense of disappointment.

I didn’t want slogans or sloganeering. I didn’t want Panthers to suddenly appear in the movie and to analyze and explain the situation. That would have been unreal. But I would have liked some acknowledgement that once upon a time in the West the Panthers made a difference.

Fruitvale Station shows how far we’ve traveled since the days of the Panthers, and how little we’ve traveled. It does seem to reflect the feelings of young people in Oakland today: their sense of injustice and powerlessness, too. The world is fucked up and there isn’t much to be done about it now, except go to movies like Fruitvale Station and go about one’s life.

The same week that I saw the film, I also saw at exhibit at Mills College in Oakland that focused on the counterculture of the 1960s and 1970s. Part of the space was allocated to the posters of Emory Douglas, which had many of the slogans from the heyday of the Panthers such as, “All power to the people” and “We shall survive without a doubt.”

I thought that I could hear those slogans echoing in the distance, and I knew that I would never hear them again in my own lifetime.

[Jonah Raskin, a regular contributor to The Rag Blog, is a professor emiritus at Sonoma State University. Raskin is the author of For the Hell of It: The Life and Times of Abbie Hoffman and American Scream: Allen Ginsberg’s “Howl” and the Making of the Beat Generation. Read more articles by Jonah Raskin on The Rag Blog.]