Alan Waldman: ‘As Time Goes By’ is a Timeless British Comedy Classic 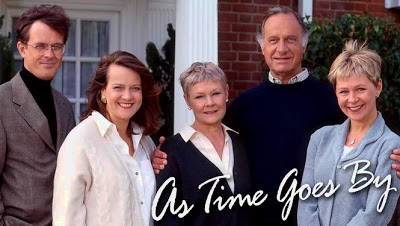 From 1992 to 2005, the brilliant Britcom As Time Goes By ran on PBS stations for nine seasons, 67 episodes, and three specials. It is so extremely witty and adorable that my wife and I enjoyed repeat episodes four and five times!

Dame Judi Dench, who is priceless throughout the series, was nominated for a BAFTA award for “Best Comedy Performance.” More than 93.1% of viewers evaluating As Time Goes By at imdb.com gave it thumbs up — and an incredible 45.2% rated it 10 out of 10. It was popular with all demographic groups but best with women 45 and older. In 2004, it was voted Britain’s 29th best sitcom. (See my previous Rag Blog columns for many of the other top comedies and mysteries.)

Back in the early 1950s, British Second Lieutenant Lionel Hardcastle (Geoffrey Palmer) and hospital nurse Jean Pargetter (Dench) met, fall in love, and promised to write while he was fighting in the Korean War. She never received his first letter, so each assumed the other had lost interest. Thirty-eight years later, Lionel is writing a book about his life as a coffee planter in Kenya and seeks a typist at the London secretarial agency Jean owns. After complications, they fall in love again and re-marry.

Sims died in 2001 and Middlemass passed away in 2006; they were adorable in their As Time Goes By roles as a lively couple who marry at 85 and travel the world having outlandish adventures. One story arc involves Lionel’s attempt to write and sell to Hollywood a TV miniseries based on his romance with Jean. Others involve various romances, mysterious new neighbors, Jean meddling in everything, and the dentist accidentally declining an OBE honor.

The series was penned by gifted Bob Larbey, who wrote an earlier series (A Fine Romance) starring Dench and her husband Michael Williams.

During PBS Pledge Breaks, cast members sometimes appeared live and reminisced about the series. They once explained that the seemingly dignified Dench was a big practical joker. When a cast member had to go to the bathroom she would lead the other actors into hiding so that the actor returned to find them all gone.