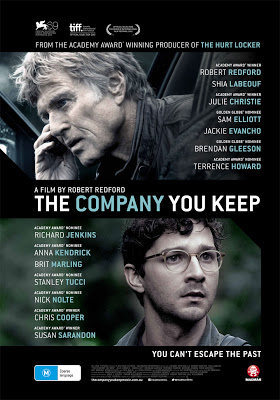 ‘The Company You Keep’:
Robert Redford’s overambitious
take on the Sixties underground

He clearly wanted to make an epic about then and now, about Sixties radicals and their kids, and he couldn’t pull it off.

The Company You Keep, released in December 2012, was directed by Robert Redford with a screenplay by Lem Dobbs based on the novel of the same name by Neil Gordon.

Robert Redford’s new movie, The Company You Keep, boasts a huge cast of characters that includes cops, reporters, FBI agents, and former members of an organization of 1960s/1970s radicals that resembles the Weather Underground. A few of the characters are on the run and the target of a manhunt, while others have crept back into the halls of respectability and want nothing to do with their former comrades.

Redford himself certainly remembers that era of seemingly unending protest, resistance, and an invincible underground as well as anyone else in the movie industry today, except perhaps the director and screenwriter Haskell Wexler (best known for Medium Cool, 1969).

Indeed, Redford was near the height of his movie career when fugitives in the Weather Underground set off bombs in federal, state, and local government buildings to protest the war machine, the criminal justice system, along with imperialism, capitalism, colonialism, sexism, racism, and more.

Redford is, of course, also familiar with Sam Green’s 2002 documentary, The Weather Underground, which tends to romanticize the fugitives and their clandestine organization. The picture was nominated for an Oscar after it made the rounds at Redford’s Sundance Film Festival.

Neil Gordon, the author of the novel that inspired the movie, had the cooperation of former members of the Weather Underground. Like Sam Green, Gordon also romanticizes the characters he portrays. He once told me he thought of the Weather Underground as the American equivalent of the African National Conference (ANC), the organization that helped end apartheid in South Africa. Like others before him, Gordon fell prey to myth.

There’s something about fugitives that makes them endearing, even when they’re desperados such as Duke Mantee, the gangster on the run played by Humphrey Bogart in the 1936 classic, The Petrified Forest. But perhaps that endearing quality has vanished in the era of terrorists and terrorism when whole neighborhoods are locked down.

I know the pitfalls of writing about fugitives, though I often found the actualities of fugitive life mundane. I remember an occasion more than 30 years ago when the FBI launched a massive hunt for the Weathermen and Weatherwomen. Curiously, they didn’t panic. Instead, they calmly and deliberately destroyed everything in their possession that might have led to their capture.

And they spent days wearing rubber gloves, wiping every surface perfectly clean in an apartment to eradicate fingerprints. That took dedication, but it certainly wasn’t glamorous. From the actualities of fugitives cleaning an apartment with Ajax you can’t really make a dramatic picture.

Mimi, the most fetching of the fugitives in Redford’s picture — played to perfection by Julie Christie — makes a speech in which she says that everything she once protested against is as insidious as ever before, and perhaps even more so. She’s eloquent and so is the character that Redford plays.

He’s an ex-radical who has reinvented himself as a liberal lawyer. His past catches up with him and so he goes in search of his own past to clear his name. The hunter is hunted. Mimi is the only person who can help him. By the end of the movie, he finds her and convinces her to come out of hiding and rescue him.

The character Redford plays is also a widower with a young daughter who doesn’t know who he really is or what he’s done in the past. Between the two of them, there’s a huge generation gap. Redford also has a beautiful older daughter — his love child — who was born underground, then adopted and raised by a police officer and his wife. (That part of the story doesn’t make any sense. When the picture tries to tie-up loose ends it only makes more of a mess.)

Both daughters are in the dark. Like the younger daughter, the older daughter doesn’t know that her real father was a Sixties radical who went on the lam. Nor does she know that she has a half-sister. The two sisters don’t ever meet. Family secrets flourish until the FBI flushes them out. Moreover, the older sister never meets her biological mother, Mimi, who has survived underground as a drug smuggler.

All the pieces in this big jigsaw puzzle of a picture don’t fit together.

Redford was overly ambitious. He clearly wanted to make an epic about then and now, about Sixties radicals and their kids, and he couldn’t pull it off. His ending is anti-climactic, though it also avoids a great many Hollywood clichés. There are no bombings and nothing is blown up — a real virtue in a picture about bombers and bombers.

There’s a long chase by car, train and on foot. Indeed, Redford’s character is on the run most of the time, though he’s long past his prime running days. Even his designer running shoes don’t help him. An old, ex-radical trying to run from the FBI presents a rather comic figure. Old fugitives can’t run. That much is clear, though it’s also clear that the acting is stellar. Redford elicited stunning performances from his team.

Along with Julie Christie, there’s Nick Nolte, Susan Sarandon, Richard Jenkins, Sam Elliott, and Chris Cooper. It’s almost as if Redford called all of his old Hollywood pals and asked them to join with him and to make a picture that would pay homage to the Sixties and bury ideological hatchets.

It’s a kinder, gentler America that Redford would like — along with integrity in journalism and fresh organic food from local farms. But nothing bigger or bolder. Even Mimi, the most revolutionary of the characters, hasn’t any hope for revolution.

The personal is more important than the political for Redford and for the character he plays. In The Company You Keep, family and friends carry more weight than ideology, and in that sense the picture does seem to accurately reflect the lives of former Weather Underground members who have almost all married, embraced monogamy, become moms and dads, raised families, become lawyers and doctors, joined the middle class and remained loyal to one another.

But has no one really become a moral monster? Or poor? Or serve a life sentence in prison? The picture gives the impression that all the old New Leftists became solidly middle class with cars, toys, and gadgets. Perhaps so, though Dave Gilbert and Judy Clark, two Weather Undergrounders, are both behind bars.

Watching the picture, I found myself caring about the characters. I kept waiting to see whether Redford would be captured by the cops — or if he’d remain at large. Still, there’s something musty and outdated about the picture that prevented me from getting emotionally caught up in the dramatic conflicts. The news got in the way.

Think about the recent bombings in Boston and the manhunt for the two brothers suspected of planting the explosives, and then think of Redford’s movie, and it’s clear that we’re in another era with a whole other set of rules. The Company You Keep is mostly an exercise in nostalgia.

The bombers of today bear little if any resemblance to the Weather Underground bombers of yesterday who were white, middle class, college educated, well-read in Marx and Mao, atheists or agnostics, and not motivated by religion or ethnicity.

It’s too bad Redford didn’t make his picture in, say, 1980. It would have seemed a lot more relevant then. Now, it’s a curiosity, though it’s also a reminder that older actors such as Nick Nolte, Julie Christie, and Susan Sarandon can still give strong performances. The young Shia LaBeouf does a credible job as an idealistic, fledgling reporter carrying on the tradition of Bob Woodward and Carl Bernstein.

You remember those guys don’t you? Redford starred in the picture, All the President’s Men, as Bob Woodward of The Washington Post and Watergate fame who helped bring down President Nixon. And surely you remember Butch Cassidy and the Sundance Kid (1969), another movie about outlaws and fugitives that stars Redford and Paul Newman and that inspired the Weather Undergrounders. All the guys wanted to be Butch or Sundance and to go out in a blaze of glory.

What hasn’t changed, of course, after all all these years, is the chemistry of the company you keep. The title of Redford’s movie about fugitives on the run seems to suggest that one ought to be careful about choosing one’s associates. Guilt by association goes a long way.

In the era of Homeland Security, the company one keeps can be as harmful to one’s health, as it was during the Salem witch trials more than 300 years ago or during the McCarthyism of the 1950s. So, if you’re going to conspire, make sure you conspire with the ones you really love.

[Jonah Raskin, a long-time journalist and activist and a regular contributor to The Rag Blog, was involved with the Yippies and, tangentially, with the Weather Underground. He is the author of For the Hell of It: The Life and Times of Abbie Hoffman. Read more articles by Jonah Raskin on The Rag Blog.]