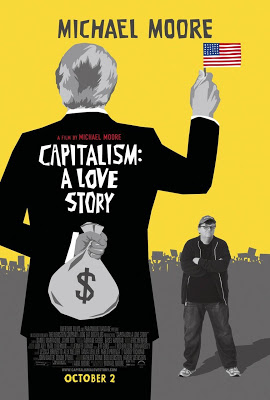 Capitalism: A Love Story, which opened in 962 theaters earlier this month, is Michael Moore’s most ambitious work yet — taking aim at the root cause behind the injustices he’s exposed in his other films over the last 20 years.

This time capitalism itself is the culprit to be maligned in Moore’s trademark docu-tragi-comic style. And by using the platform of a major motion picture to make a direct assault at the root of the problem, Moore has created space in the political mainstream for a radical conversation (radical meaning “going to the root”).

It’s a conversation that is desperately needed as the economic crisis continues to devastate low- and middle-income Americans in spite of President Obama’s and Congress’ efforts to stop the bleeding by throwing trillions of dollars at the banks.

Recently, Democracy Now! reported that while the Dow Jones topped 10,000 for the first time in a year, foreclosures have reached a record level of 940,000 in the third quarter. But with this film airing in major chain cinemas across the nation, the normally taboo topics of how wealth is divided, who owns Congress, and how vital economic decisions are made are now open for discussion in a way they haven’t been in the U.S. for decades.

In Capitalism, Michael Moore features the reality of the economic crisis for America’s usually-invisible poor and working class. The movie begins with a family filming their eviction from their own home. In a terrifying scene, we watch from inside their living room window as seven police cars roll up to throw the ill-fated family onto the street for failing to make their payments.

Moore explained in an interview, “You see [a foreclosure] really for the first time from the point of view of the person being thrown out of the house.” This same bottom-up viewpoint carries the audience through the rest of the film, from the stories of kids in Pennsylvania sent to private detention centers for minor offenses by judges who received kickbacks from the prison company, to airline pilots whose wages are so low they have to go on food stamps.

By grounding the viewers in the human costs of out-of-control capitalism, Moore finds firm footing for launching his attacks on the Wall Street firms that he believes are responsible for this crisis. As the film points out, the richest one percent of Americans now control more wealth than the bottom 95%, a sorry state of affairs that has grown steadily worse since the 1980s. Ronald Reagan, Alan Greenspan, and his two buddies Larry Summers and Robert Rubin are implicated in Capitalism as responsible parties behind the gutting of regulations and the deliverance of the federal government into the hands of the bankers.

Michael Moore’s conversations with congressmen and women about the $700 billion bank bailout passed last October best illustrate this transfer of sovereignty. The congresspeople are remarkably candid in their dismay at what was essentially a blank check to Goldman Sachs, Bank of America and Citigroup.

Representative Baron Hill from Indiana recounts that the bailout bill was pushed through Congress in a similar manner as the Iraq War authorization, under threat of catastrophe and terror. Marcy Kaptur, congresswoman from Ohio, however, does one better. “This was almost like an intelligence operation,” she laments. And when Moore asks her if the bailout represents a “financial coup d’etat” by the bankers, she responds, “I could agree with that. Because the people here [pointing to the Capitol] really aren’t in charge. Wall Street is in charge.”

We also witness Kaptur’s courageous honesty on the floor of the House, urging Americans to resist foreclosure by remaining in their homes. Detroit sheriff Warren Evans stands out as another hero in the film when he announces he will cease foreclosure evictions in his jurisdiction because of the damage to the community caused by making more houses vacant and more families homeless. Moore also features grassroots organization Take Back the Land, which has dramatically responded to the crisis by moving evicted families back into their homes in the Miami area.

Regular folks fighting back against a system that is depriving them of income, housing, health care and other basic needs is inspiring stuff to watch, and it’s not something we’re used to seeing up on the big screen. Capitalism displays this grassroots defiance surprisingly well by humanizing those on the bottom of the pyramid.

One man whose farm is foreclosed on angrily warns, “There’s got to be some kind of rebellion between people who’ve got nothing and people who’ve got it all.” His words are buttressed by a behind-the-scenes look at Republic Windows & Doors, where laid-off workers occupied their Chicago factory and refused to leave until receiving their promised severance pay. For Moore this represents the kind of direct action that everyday people must now begin to take to protect themselves from having to pay for the misdeeds of the wealthiest one percent.

This call to action is well taken. However, one piece lacking in the film’s analysis of capitalism is how the system of economic power interlocks with other structures of oppression, for example U.S. imperialism, patriarchy and white supremacy. Capitalism affects different people in extremely different ways, and while some fear losing their jobs, others fear imprisonment, rape, or even being hit by a drone attack. But Michael Moore seems to avoid a conversation about racism, sexism and homophobia in order to appeal to a mythical homogeneous American working class.

And besides a brief comparison to Rome, the movie also shies away from discussing the U.S. role in the world and how a militaristic foreign policy serves the interests of corporate and financial elites — even though opposition to the wars in Afghanistan/Pakistan and Iraq have never been greater.

Another weakness is how Moore handles Barack Obama with kid gloves. Even while his economic advisers are skewered in the film, President Obama’s role in the bank bailouts is downplayed, and he comes out looking like a champion of the people, or at least a potential champion. In this respect Michael Moore bestows honors like the Nobel Committee, not so much for what the president has done, but for the “hope” of what he might do.

So what does Michael Moore propose as an alternative to capitalism? Not socialism, but a kind of economic democracy — an opportunity for average folks to have a say in how their money is used, from the workplace on up to the government. Moore takes us inside co-ops in America where workers vote on decisions about finances democratically, and where salaries are equal and adequate for everyone in the company. In one factory, assembly line workers and the CEO each make about $60,000.

To reinforce his economic prescription, Moore even dug through archives to recover lost footage of FDR’s long-forgotten proposal for a “Second Bill of Rights,” which called for guaranteeing meaningful work and a living wage, decent housing, adequate medical care, and a good education for every American.

It is striking how such common-sense ideas in our current political climate appear dangerously radical, even coming from the lips of a U.S. president. It seems the overriding purpose of Capitalism: A Love Story is to flip these expectations on their heads. For Michael Moore, guaranteeing basic economic security is as American as apple pie; what is radical is a system that would deny such prosperity to bolster the wealth of a tiny few.

If there is to be any solution to the economic crisis that doesn’t involve millions more people being thrown out of their homes or dropped from their health care, it will have to involve a sharp break from a system that values private profits higher than meeting people’s basic needs.

To this end, Michael Moore has done a great public service by making a film that is essentially an invitation for views outside the bounds of established mainstream discourse to propose what might be done about the economic quagmire we now find ourselves in. It is time for an American Left to come out of the wilderness and speak out with proposals for better ways of organizing our economy. I see no reason to be any less bold than President Roosevelt was 65 years ago.

Here is an excerpt from President Roosevelt’s 1944 “Second Bill of Rights” speech:

We cannot be content, no matter how high that general standard of living may be, if some fraction of our people — whether it be one-third or one-fifth or one-tenth — is ill-fed, ill-clothed, ill-housed, and insecure.

This Republic had its beginning, and grew to its present strength, under the protection of certain inalienable political rights — among them the right of free speech, free press, free worship, trial by jury, freedom from unreasonable searches and seizures. They were our rights to life and liberty.

As our nation has grown in size and stature, however — as our industrial economy expanded — these political rights proved inadequate to assure us equality in the pursuit of happiness.

We have come to a clear realization of the fact that true individual freedom cannot exist without economic security and independence. “Necessitous men are not free men.” People who are hungry and out of a job are the stuff of which dictatorships are made.

In our day these economic truths have become accepted as self-evident. We have accepted, so to speak, a second Bill of Rights under which a new basis of security and prosperity can be established for all — regardless of station, race, or creed.
Among these are:

All of these rights spell security. And after this war is won we must be prepared to move forward, in the implementation of these rights, to new goals of human happiness and well-being.

[Alex Knight is an organizer and writer in Philadelphia. He is currently organizing with Philly Students for a Democratic Society (SDS) and the People’s Caravan, which recently completed a story-listening and action trip to the G20 summit in Pittsburgh. He also maintains the website endofcapitalism.com and is in the process of writing a book called The End of Capitalism. He can be reached at activistalex@gmail.com.]