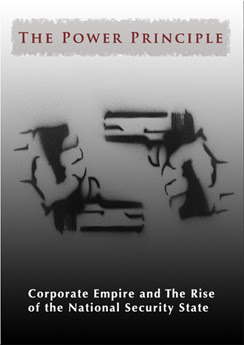 A remarkably detailed, clearheaded, and engrossing study of how the United States power elites created the mess we find ourselves in.

Discussing the nature of the U.S. Empire and how it got to where it is today with most U.S.  residents is always a challenge. Recommending books explaining it is equally so. This is especially true when one considers that most people who live in the United States have little or no concept of what an empire is and, when it is explained to them, are reluctant to believe that their nation is such a thing.

I have often thought that someone should make a film that might accomplish this educational goal. After all, film is simultaneously informative and entertaining, especially when it is well made. That is the case with radical documentarian Scott Noble’s (Rise Like Lions, Psywar, Lifting the Veil) latest effort, The Power Principle: Corporate Empire and the National Security State.

Made in three parts, with each one totaling about an hour and 15 minutes, The Power Principle is a history of the United States and the building of its empire. The emphasis is on the last 70 years of that history. It includes original footage from film and television news broadcasts, lectures and commentary from champions of the empire and its critics, and a pastiche of other images culled from cultural, technical, and propaganda efforts representative of the time and subject covered.

The result is a remarkably detailed, clearheaded, and engrossing study of how the United States power elites created the mess we find ourselves in. Furthermore, this film makes it clear that in the eyes of the elites, everyday citizens are little more than pawns to be manipulated in the elites’ drive to control the world.

There is a lot of history to be covered when discussing a topic as broad as the growth of the U.S. Empire. Even a film almost four hours long can only begin to explore that history. To his credit, Noble does a great job picking important moments of U.S. history to describe and analyze.

As a result, those historical moments bring forth more than the moments themselves; they exhume their motivations and effects, thereby creating a historical timeline that provides the viewer with a clear sense of how history is shaped by humans and how humans shape history. Noble’s highlighting of particular documents and individuals furthers that understanding.

Key to the hypothesis presented in The Power Principle is the relationship between the U.S. war industry, Wall Street, the U.S. military, and the government in Washington. The interlocking relationships between corporations like Lockheed and presidential appointees like Warren Christopher point to the connections between war and Wall Street in a very personal way. So do more personal relationships such as the marriage of Dwight Eisenhower’s personal secretary to an executive of the United Fruit Company.

Other graphic reminders of how few families and corporations run the United States are also discussed: Kermit Roosevelt’s role in overthrowing the popular Mohammed Mossadegh of Iran; the friendly relations between U.S. bankers like Prescott Bush and the German Nazi regime; the hiring of certain Nazis after World War II by the United States; the reinstallation of fascists into government in Italy after the war to prevent the rise of the communists; and so on.

The middle segment of the film is titled Propaganda. It is an interesting and unnerving look at how everyday people are manipulated by the powers that be. One of the key statements in this section is from Senator Arthur Vandenberg, a Republican from Michigan whose career prior to politics was in journalism. It was his resolution of June 1948 that is considered the foundation of NATO.

Vandenberg always understood that NATO’s purpose was to maintain and expand the growing U.S. empire. He also understood that the people of the United States were reluctant to become the world’s policeman, especially so soon after the carnage of World War II. With this in mind, he told colleagues that the only way to convince U.S. citizens to expand their military and become an imperial nation was “to scare the hell” out of them. That has been the essence of Washington’s line to its own citizens ever since.

The third segment provides a discussion of the U.S. Empire in the post-Soviet age. Key to this discussion are two things: nothing changed as far as the military-industrial complex was concerned and the agreement between the two political parties over empire is stronger than ever before. In other words, there is no difference in the way U.S. foreign policy is conducted no matter which major party’s candidate wins the White House.

Additionally, the presence of the U.S. military in civilian life has never been greater. A brief interview with Left editor and thinker Michael Albert concludes the film. He presents the possibility of a different world where the Empire is dissolved and the military-industrial complex is transformed into building things that benefit mankind. Unfortunately, the overriding conclusion of The Power Principle is that such a scenario is both necessary if we are to survive as a species and unlikely unless the current system is removed.

If I were a high school or postsecondary teacher hoping to get my students to consider U.S. history in a different light, I would show this film. Not only does it rearrange the common understanding of Washington’s role in the world, it also forces the viewers to reconsider how their understanding of that role is manipulated and misused.

Certain to provoke reactions both positive and negative, Scott Noble’s most recent film is meant to disturb the general complacency of the body politic. Help spread the word.