FILM : ‘WHY WE FIGHT’ — The Dominant Role of the Military in American Life 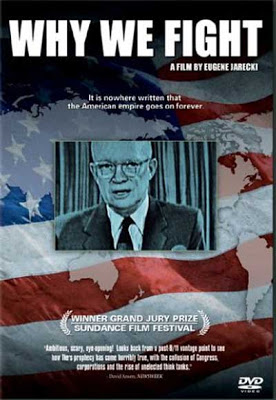 WHY WE FIGHT: ‘We must understand the underlying disease itself’
By William Michael Hanks / The Rag Blog / September 5, 2008

One may scarcely witness the cascading events of the last decade without feeling a sense that something is going terribly wrong with America. Our government tells us that we stand for democracy. Yet, for over half a century we have overthrown democratically elected regimes and installed repressive dictators friendly to U.S interests.

We are told that we stand for human rights, yet we ignore genocide in Africa and train Central and South American terrorists in the School of the Americas. Government leaders decry the deceitful regimes of our enemies while perpetrating one of the grandest deceptions in American history upon our own people – a deception that has wasted our economy and cost the lives of thousands of young American men and women and hundreds of thousands of lives in other countries.

This would all read like George Orwell or Phillip K. Dick fictions of the future except for two things – it’s not fiction and it’s not the future, it’s now. One’s first instinct is to react to the visible symptoms of this malignancy: protest the war; expose individual hypocrisies; espouse human rights and social justice. But we can do all these things, and even be successful, without curing the disease. We stopped the Vietnam War only to see a sequence of others made in the same mold – each one more egregious than the last.

Certainly we must continue to oppose each unjust war, expose deceit, and act for social justice and human rights. But we must do much more if we are to bequeath a better world to future generations. We must understand the underlying disease itself – the DNA of forces and combinations that come together invisibly to create the visible symptoms of war, injustice, and oppression.

We need more informed thought and discourse about what has gone wrong in America. One good source is a documentary, WHY WE FIGHT, (Grand Prize, 2005, Sundance Film Festival) directed by Eugene Jarecki. The film follows the evolving thoughts of a Vietnam veteran, who lost a son when the World Trade Center towers fell, and the actions of a young man who is joining the military. It begins with the last address of President Eisenhower warning of the dangers of the Military-Industrial Complex. It is intercut with surprisingly candid interviews with military and intelligence officers who document the evolving deceptions of American citizens and the reasons for them.

WHY WE FIGHT addresses the underlying causes of war and injustice that we are supporting as taxpaying citizens. We, the American people, are making all this possible. Without the tax dollars and will of the people none of these things could be done. We are not only responsible we are accountable to future generations. It is our duty to understand the causes of war and injustice and, by confronting them at their source, reveal their true nature. If the majority of the people can understand the real enemy and act in solidarity we can leave the world a little better place.

WHY WE FIGHT shines new light on where the real fight is.

Go here for a clip.

And go here to see the film.

Also go to Until the Sun Stops.

2 Responses to FILM : ‘WHY WE FIGHT’ — The Dominant Role of the Military in American Life