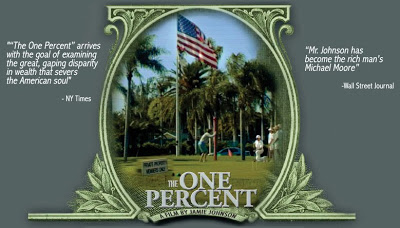 Documentary film:
Jamie Johnson’s The One Percent is a
revealing statement about wealth in America

Jamie Johnson has a conscience if he can keep it. He is heir to one of the largest fortunes in America: Johnson & Johnson. In The One Percent, his second documentary after Born Rich, he combines his interest in economic inequality in America with a skill and talent for filmmaking.

The film is worth seeing. It is a fresh and honest statement about the disparity of wealth in America. The exclusive access the filmmaker’s family name gives him to the very wealthy made some of the surprisingly revealing interviews possible.

Jamie points out that:

Today in America the disparity between the haves and have-nots is greater than it’s ever been. Now the top one percent of Americans like my family and me own 40 percent of all the country’s wealth and we share an aggregate net worth that is greater than the bottom 90 percent of individuals combined.

His family, as do most very wealthy families, has a wealth counselor who meets with the whole family regularly. You have to see this guy. He comes off like a mean-spirited hired gun — like the Jack Palance character in Shane. The deference which Jamie’s father shows this bully is pathetic. But then, every year the story is always the same — the wealth of the family continues to grow and who can argue with success?

Jamie uses his family name to enroll in one of the most exclusive wealth conferences in America — The Lido. Jamie remarks to the conference director: “There are people that are looking for funding for their projects who would absolutely kill to get into this meeting.” The Director, Gregg Kushner, responds “That’s right, absolutely, and we make sure they don’t get to get in.”

It is this “circle the wagons” — the “us and them” mentality — that pervades the attitudes of the very rich. There is a universal refusal to even broach the subject of disparity of wealth. The candid sequences with the very rich in the film reveal this in ways that media coverage and mere commentary cannot.

The mantra of the rich as given by Gregg Kushner, the Lido Conference director, is as follows

There is much greater good done by the people with the wealth in creating jobs, creating business opportunities, and in philanthropy than otherwise, and I would say it makes more sense to me to encourage business ownership, to encourage the wealthy to generate that wealth so that wealth can then be shared rather than take it from individuals to then redistribute it through social policy and transfer policies of medicare and social security or whatever. I hope that didn’t come out sounding crass.

Well, Gregg, it did.

Of course the fallacies — some would say lies — are that the facts belie the myth that wealth is shared. How much sharing is being done if one percent owns 40 percent of the wealth? And how is having a person over the barrel, so he has to accept slave wages, not taking it from individuals? How does charging 600 percent interest on a pay day loan not taking it from individuals?

Apparently taking from some individuals is OK — just not from the wealthy. As Dickens said, “The poor have no right to their good fortune.” The other lie is that rather than being “redistribution” or “transfer” policies, social security and medicare are self-funded programs that are supported by those who participate.

Jamie runs into these attitudes repeatedly in his interviews. The interview with Milton Friedman is something to see. The duplicity and bullying are astounding. I would like to know who paid for this man’s Nobel Prize. It could not have come from an original contribution to economics; the previous author Attila the Hun should have gotten the prize. He reveals himself to be merely a thug who works as economic muscle for the wealthy and their minions.

These reactions are typical in most of Jamie’s interviews with the very wealthy, but there are some who seem not to be able to silence their conscience so easily. His interviews with Warren Buffet’s granddaughter led Buffet to disown her and his interview with the the Oscar Mayer heir revealed his struggle with economic equity which culminated with giving away his money.

It’s not even that huge profits are a result of hard work and innovation anymore, or real service to the market; more and more, huge profits are the result of favorable laws, regulations, and subsidies. Laws bought and paid for with campaign contributions.

In one interview, Kevin Philips, a former Nixon aide and author, said “It’s been the case for the last 25 years in the United States that the amount of money flowing into the system for political contributions has been a major shaper of who gets what within the economy.” The film shows specific examples of how corporate and individual contributions lead directly to multi-million dollar subsidies for donors.

The most revealing moments of the film are the times when the very wealthy are being interviewed and show a complete lack of self reflection — their mythology, tired and aging as it may be, seems the touchstone of justification for their control of such vast assets. It was always the same song: vast wealth generated all good in society and any form of taxation is socialism.

Most of those interviewed just shut up and refused to comment when the subject of the film was revealed. The fear of addressing the obvious was palpable.

The saddest thing about the film is the portrait of Jamie’s father. When he was Jamie’s age, he had made a film about poverty and apartheid in South Africa. He was so criticized by his family that it appears he never quite got over it. He, one of the wealthiest men in America, was reduced to being a fearful, ineffectual, and indecisive man with faith no more in anything but the bloodless approval of his financial adviser, his croquet games with rich friends at the country club, and an ice cold martini, or two.

But the unseen tragedy that the film holds like a secret box within a box is that Jamie himself will end up like his father. The wolves encircling him — biting, punishing, threatening to alienate him from all he has known in his life. Reminding him of the ultimate price — exclusion, poverty, and isolation. Surely he will come to his senses, surely he will come back into the fold, a chastened member of the club.

But then again, Jamie has a conscience, if he can keep it.

[William Michael Hanks lived at the infamous Austin Ghetto and worked with the original Rag gang in the Sixties. He has written, produced, and directed film and television productions for the National Aeronautics and Space Administration, The U. S. Information Agency, and for Public Broadcasting. His documentary film The Apollo File won a Gold Medal at the Festival of the Americas. Mike lives in Nacagdoches, Texas. Read more articles by Mike Hanks on The Rag Blog.]