First We Must Awaken from Our Stupor 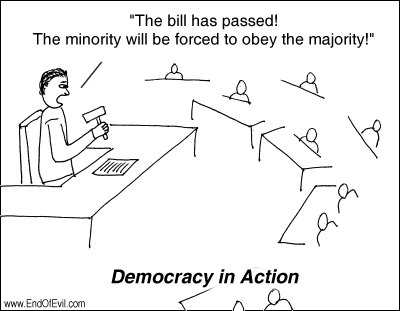 Because so many of the people on the political left fear that John McCain will become the next president, they have allowed themselves to see the very moderate democratic candidate, Barack Obama, as a desirable alternative to the decidedly ghoulish McCain, rather than supporting a genuine progressive like Dennis Kucinich, Cynthia McKinney, or Ralph Nader. They thus perceive Obama to be far more progressive than he really is. Such comparisons lead us down a dichotomous pathway that assures a continuous drift to the right.

Each election cycle the people on the left find themselves out-flanked by those on the right by allowing them to frame the debate and to define who we are. So each election we end up supporting a very moderate candidate rather than a truly progressive one. Because all of the mainstream candidates are intensively influenced by corporate lobbyists and the electoral system is owned by capital, democracy has remained as elusive as capturing the ghost of a saint with a piece of duct tape.

According to Ambrose I. Lane Sr., host of Pacifica radio’s “We Ourselves,” John McCain has the third most conservative voting record of anyone in the senate. Running an extremist from the opposite end of the political spectrum forces the democratic candidate further to the right than he or she already is. So when progressives fall into this trap, as they so often do, it is a win-win for the corporate lobbyists pulling the strings behind the curtain. They end up supporting a candidate they think can compete against extremists rather than one who actually represents their values. If you have to become like your opponent in order to defeat them, what can you honesty say has been won?

Progressives cannot gain ground by ceding their ideology to their conservative opponents in order to gain office. Without having a viable candidate coming from the far left of the Democratic Party, progressives cannot reasonably expect to push the debate back toward the political center, much less to the left of center. You can make a good case, however, that the democratic leadership under Howard Dean has no real desire to move to the left or to represent traditional progressive values. It likes the status quo just fine; a position that has served its corporate funders well.

Because it has been co-opted by corporate lobbyists—who always hedge their bets—the Democratic Party no longer houses a genuine left-wing faction that can effectively compete for votes in a way that emulates the success of the far right. Because right-wing extremism and corporate fascism are portrayed in the corporate media as reasonable centrist positions beneficial to the people—that is how they are perceived by those who receive their political education from those sources. Thus extremism packaged as democracy is widely considered to be the norm when, in fact, it is not; it is fanaticism couched as something much more benign or beneficial, even if it is a poison pill. Yet it is this extremism that undermines the interests of the nation’s working class people and keeps them subservient to corporate fascism. Voting for meaningful change is like running on a treadmill and expecting to actually go somewhere.

The problem is that capital, rather than informed citizens interested in democracy, is in control of the electoral process. Capital furthers the interest of capital, rather than the interest of the people, and this creates an irreconcilable conflict with genuine human interests. So we end up with a sociopolitical system that is not only fundamentally unjust; it is also predatory and cannibalistic. It consumes the very people who feed it and give it the appearance of legitimacy: the great unwashed working class.

Capitalism flourishes, for a short time, at least, by socializing costs and by privatizing profits and this concentrates and centralizes power into the hands of a select few. Its real purpose is not to serve people; it is to exploit them. Capitalism isn’t even a natural system; it is a purely human construct that has no basis in nature. It is a synthetic system and, as we have seen through chemistry, synthetic systems tend to become mutagens, and thus promote cancer.

Due in part to their extreme political naiveté and to delusional thinking, too many people have accepted corporate fascism as a centrist or “normal” position. Thus they have unwittingly allowed predatory and cannibalistic forces—unregulated markets—to determine the fate of the nation and its people. Neoconservatives and neoliberals, alike, have defined the free market as an unregulated market, which has become their concept of democracy. The so called free market is not under the control of human beings in any meaningful sense, and it does not respond to human needs. Like a creation of Frankenstein, it is a man-made monster that has escaped from the laboratory and is wreaking havoc across the countryside, menacing everyone and everything in its gargantuan steel-booted path.

By themselves, markets are not necessarily a bad thing. Certainly people need commerce and trade. However, it is when markets are deregulated—as required by the adherents of Milton Friedman and the Chicago School of Economics—that they turn upon people and become predatory, undemocratic, and cannibalistic. When markets are given more power and more rights than people, people will cede not only their power to them, but also their humanity. This is how markets have become all-powerful entities that have no soul or conscience and are answerable to no one: monstrosities in every sense of the word.

I would argue, however, that the object of commerce and trade should be to serve people and to benefit the whole of society, rather than to generate enormous profits for the benefit of a select few. Commerce without democracy cannot help us toward a free and democratic society; it can only undermine our every effort at genuine democratization.

Either you work for the public interest or you work for self-interest. It is this assertion that finally brings us back to our starting point—the electoral process. Because the process is under the control of capital rather than working class people, it undermines the democratic process and substitutes something else in its place. That process has led us to where we are and it can never take us back to where we started from. Nor can it ever lead us to genuine democracy or to justice. It can only bear the fruit of its own seeds; it can only provide us with more of what it has already produced.

If we the people are serious about real democratic government, we must work for it outside of the electoral process, as well as from within. We must organize a revolutionary force so powerful that it cannot be ignored or denied. We must institute effective and prolonged economic boycotts. We must organize work slow-downs, work stoppages, and general strikes in order to make corrupt government feel our pain. We must create labor unions that genuinely fight for worker’s rights while simultaneously transitioning the country away from an exploitive and self-destructive capital economy toward a people-oriented economy based upon need, rather than privatized profit subsidized by public funds. These are the means to creating a democratic workplace and bringing malignant capitalism to a grinding halt. The electoral process does not provide the tools for revolution; it subverts the process and only delays the inevitable.

While Barack Obama has run for the presidency on the premise of change, his ideology is fundamentally the same as the presidents who came before him: the economic theories of Milton Friedman and the belief in corporate deregulation; profits before people. Obama’s economic advisers subscribe to the same economic theorem that brought us the trickle down economics of Ronald Reagan and his disastrous foreign policy. Obama’s foreign policy advisers subscribe to the same philosophy that brought us the invasion of Iraq and the Israeli occupation of Palestine; every one of them a war-mongering imperialist with close ties to the military industrial complex with its nexus of profiteering. His energy policy team has great faith in clean coal and safe nuclear energy, neither of which exists.

Because the Obama team is anything but revolutionary, it is unreasonable to expect them to produce polices significantly different than the ones that are already in play. We saw this with Bill Clinton who campaigned on promises to do one thing but, once elected, did another. Clinton won office by being more right-wing than his republican opponent. That was no victory for progressives. How could it be?

This is not to say that Barack Obama is a bad person in any way. Certainly, he is an intelligent man of reasonably good character and a fine orator, but that does not qualify him as representative of the people or the democracy they so desperately need. Is he a better choice than John McCain? Without doubt he is. But then, so is almost anyone else. A toadstool would be a better choice than McCain. We must remember that Obama has been groomed to become president some day and that grooming was provided by special interests whose unstated purpose is to undermine genuine democracy by substituting an imposter in its place. They are convinced that the American people won’t know the difference. So don’t expect any significant changes under Obama, despite all of the campaign rhetoric to the contrary.

The presence of McCain makes the very moderate Obama an appealing alternative and that assures victory for the status quo. It frightens progressive voters away from supporting real progressives like Dennis Kucinich or Cynthia McKinney. Barack Obama was the real choice of the established orthodoxy all along. The marketing strategists have used John McCain to funnel the votes toward Obama and away from genuine progressives. That is where the real fight was. You can call it voting in the absence of real choice because that is precisely what it is. The same policies that have been in play for decades will continue on and we will keep getting a similar result.

Obama’s recent endorsement of warrantless wire-tapping is not only evidence of his belonging to the established orthodoxy; it directly connects him to the draconian policies of the Bush regime and to those of Senator McCain. No true progressive would want to be associated with the unlawful and unjustified surveillance of law-abiding citizens. This is a red flag that must not be ignored.

This is why the country continues to quietly drift further to the right: there is no real choice in elections and we continue to behave as if there are. It is the capitalist system that is at fault, not the candidates themselves who play the game according to the dictum of its inventors. They, too, as despicable as some of them are, are its unwitting victims.

What hope is there for genuine progressives in a game that is rigged? If we are ever to become responsible citizens, we must learn how to separate the contents of the box from the fancy packaging. The same old ideology, regardless of who espouses it, will not lead to meaningful change; nor will pursing the same old methods. If we are going to be satisfied with that, then we can continue to be pawns in a rich man’s game and accept the results of the game without complaint. If we expect better, then we must begin by demanding better of ourselves by recognizing what is being done in our name and doing something about it. But first we must awaken from our stupor and come to the realization that democracy means direct citizen action.

This entry was posted in RagBlog and tagged Politics, Presidential Campaign. Bookmark the permalink.