For American Workers : Lessons from the French Revolution 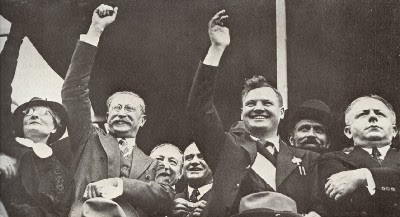 Victory of the “Front Populaire” in 1936. From left to right: Mme. Blum, Léon Blum (SFIO), Maurice Thorez (PCF), Roger Salengro (SFIO, minister of the Interior). In the second row, behind Blum and Thorez, (rolling a cigarette) is Edouard Dalladier (Parti Radical , defense minister).
No history to learn from: American working class consciousness is almost an oxymoron.
By David P. Hamilton / The Rag Blog / September 19, 2008

Class-consciousness: a basic some have and some don’t.

The pinnacle triumph of French socialism was triggered when Stalin changed his international policy in 1934. From the Bolshevik Revolution onward, the leadership of the Soviet Union had insisted that all socialist parties follow their model. In France, conflict over this dictate came to a head at a Congress of the Socialist Party in December 1920. The decision was whether to join the Third International by endorsing Lenin’s “Twenty-one Points”, a statement of principles that was “a break with the wartime reformism [and] the adoption of methods similar to those of the Bolshevik Party”.

The result was a classic left sectarian split. The faction that dominated the congress became the French Communist Party. Leon Blum led the minority, which became the French Socialist Party. But strength at the congress did not accurately reflect strength on the ground. The Socialist Party soon proved it could win more votes in parliamentary elections and was stronger among union members. The split became rancorous with Communists commonly referring to Socialists as “social fascists” who didn’t understand “scientific socialism”. The Socialist believed Communists to be unpatriotic sycophants of Moscow.

Then fascism began its march across Europe. First, Mussolini came to power in Italy in 1922 and initially earned widespread positive reviews. Then Hitler took over in Germany in 1933 and Franco initiated his right wing insurrection to overthrow the Spanish Republic in July 1936. It was mainly fear of a resurgent Germany that caused Stalin to change his mind. The new policy for the Third International directed member parties to form anti-fascist popular fronts that united all elements of the left under a common, reformist program, essentially the program of the Socialist Party, plus anti-fascism. The reunification of the socialists into “popular fronts” quickly led socialist led governments in Spain in 1935 and France in 1936, a first for both. For France, a country with a long history of vitriolic anti-Semitism, the Socialist leader, Leon Blum, was also the first Jewish Prime Minister. His ruling coalition was based on the legislative plurality of the combined Socialist and Communist Parties.

Immediately after Blum became prime minister, the country was swept by a huge wave of strikes, 12,000 of them, all in the private sector, 75% of which involved worker occupations of the workspace. Two million workers went out on strike in the middle of a depression regardless of the deep pool of unemployed. For the first time, the strikers knew that the government would not send in the troops.

On Sunday, June 7, 1936, the patronat, essentially the central committee of the capitalist class, met at Blum’s office with officials of the new government, plus Socialist Party, Communist Party and union leaders backed by the majority of the electorate and the strikers. It was not a fair fight. With the government on the side of an insurgent working class, the capitalist leaders felt largely helpless. In one afternoon, French workers won the right to organize unions, mandatory collective bargaining, union representation in the determination of workforce policy, a 15-17% wage increase, and amnesty for strike actions. The government also pledged to move instantly to pass legislation to establish the 40-hour week without loss of pay and two weeks paid annual vacations. Not surprisingly, membership in socialist parties and unions “rose by hundreds of thousands”. The French socialist movement probably won more in one Sunday afternoon as the US labor movement has won throughout its history.

This socialist victory has now been taught for generations by public school teachers, their union being a one of the most stalwartly socialist of French unions. A positive depiction of socialism’s achievements has been standard curriculum for French students since the end of WWII. Because of this general consensus, the great majority of French people are well aware of the benefits they, their parents and their grandparents have all received as a result of the actions of socialist movements; eventually including national healthcare, mass transportation, paid education, public housing, lengthy unemployment compensation, guaranteed pensions, the 35 hour week, a month’s paid vacation and self respect. Hence, the French have a relatively high degree of class-consciousness, an entrenched awareness of the very tangible benefits socialism has brought their society and them personally. Bourgeoisie and proletariat are, indeed, both French words.

In the United States, our basic problem is that this consciousness is negligible among American workers. They have never had their own socialist government. They have the only non-socialist labor movement in the world. Their unions, although weak, remain under continuous and unrelenting assault by the capitalist class, its media minions and government functionaries. Not surprisingly, American unions are today a shadow of their former limited selves, more a relic than a major force in American society. American capitalist hegemony has effectively fought the development of class-consciousness among American workers. That’s a lot to overcome.