Houston and Ike : Abandoning the ‘Independent’ 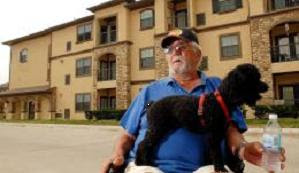 Bill Phillips was trapped for two days at his senior apartment at the Villas. Photo by Dave Rossman / Houston Chronicle
One story among many:

‘Independent seniors’ — which means they can dress themselves — abandoned by apartment complex during Ike
By Lisa Gray / September 18, 2008

Villas on Winkler, a large, newish complex in southeast Houston, describes itself as a “community designed to provide affordable comfort, quality and serenity” for “independent seniors.”

“Senior ” is the easy part: It means age 55 or older. Independence is where things get sticky.

Many of the Villas’ residents are elderly, frail or disabled. They don’t need the services that “assisted living” provides; they can dress, bathe and feed themselves. But they can’t necessarily walk down a flight of stairs, drive to another city, or lug ice and bottled water.

The complex wasn’t in a mandatory evacuation ZIP code for Hurricane Ike. Though most projections warned that Houston could lose electric power for quite a while, no government entity bused the seniors inland.

Instead, management handed out fliers informing residents that they were in charge of their own storm preparations: “ARE YOU PREPARED FOR A HURRICANE? … VILLAS ON WINKLER IS NOT RESPONSIBLE FOR YOUR EVACUATION!”

And at 5:10 p.m. Thursday, as the storm barreled toward Texas, Villas on Winkler’s office personnel went home, leaving the residents in the care of a skeleton maintenance crew.

As the storm passed over Houston, the neighborhood took a pounding. But the buildings at the Villas escaped large-scale physical harm. Like most of the city, they lost power.

They’d had it with independence.

Could be a killer

Ike was an equal-opportunity storm. He knocked out power to the rich and the poor, the healthy and the sick, the young and the old. And so far, electricity’s spotty return has seemed almost as fair. My blue-collar eastside neighborhood remains without power — but so does much of The Woodlands.

A blackout, though, isn’t fair. Being forced off the grid hurts the weak more than it hurts the strong. For me it’s a drag. For residents of the Villas, it could be a killer.

Irma Linda, a nurse, stayed with family during the storm, and was shocked when she returned home to the Villas. The hallways’ emergency lights had lasted only one night. People were running out of food and insulin. Her door-to-door canvass of the apartments turned up a man who had passed out from hunger.

On Monday, three of the complex’s able-bodied residents carried Phillips and the scooter down the stairwell. They loaded the scooter onto a pickup, and he drove it to a car-sales lot that had a generator. The lot’s owners let him charge the scooter.

Now Phillips spends his days outside, under the shade of a tarp, with Linda’s crew. Before darkness falls, he bike-locks his scooter to the stairwell.

Then, he says, he crawls up the stairs, one by one, and on his belly slides to his apartment, where he’ll spend the dark night.

Linda grilled the meat from her fridge and served it to the hungry. With a band of other residents, she gathered more food to be distributed and made the cardboard signs.

She also called state Sen. Mario Gallegos, who lives nearby. Gallegos says he’s made sure that the Villas is at the top of CenterPoint’s priority list. But as of Thursday, the independent-living complex was still without lights.

But days into the slo-mo emergency, contract security guards showed up to guard the gate.

At least one maintenance man has remained on the site throughout the emergency. But residents regard him as a hindrance.

On Wednesday, he made them take down their cardboard pleas for help. He said they made the Villas look bad. He seemed to think that an independent-living complex should look … you know … independent.