For the First Time: A Two-State Israel/Palestine Solution with a Specific Time Line 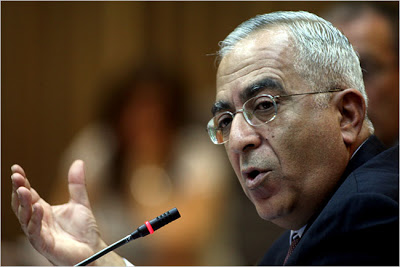 Prime Minister Salam Fayyad announced the plan, the first of its kind from the Palestinian Authority, in his Ramallah office. Photo: Abbas Momani/Agence France-Presse — Getty Images.
Palestinians Plan State, but Will Netanyahu Block it?
By Juan Cole / August 26, 2009

The Palestinian prime minister, Salam Fayyad, has put forward a plan for a Palestinian state to be attained within 2 years. This is the first time such a blueprint with a timeline has been offered and it is a very big deal. The reason it can be taken more seriously than most talking points generated by the Israeli-Palestinian ‘negotiations’ (the longest-running ugly divorce in contemporary history) is that President Obama is dedicated to a two-state solution. If he is going to get one, something like Fayyad’s plan is crucial, and so is a timetable of some sort (it has to be before the presidential campaign season in 2012).

Of course, the Likud government of Israel is all about preying on the Palestinians’ land and resources and is die-hard opposed to a two-state solution. Israel is strangling the Palestinian economy.

The Israelis are restricting Palestinians’ water supply and essentially using their water at a rate 4 times that of the Palestinians.

Dozens of Palestinians in East Jerusalem have been pushed out of their property by Israeli squatters and are now forced to sleep in the streets.

Israeli illegal immigrants into the Palestinian West Bank routinely act like thugs, beating up on Palestinians and stealing from them.

Israel has 11,000 Palestinians behind bars, and has repeatedly blocked family visits to prisoners, which the Red Cross has called a violation of the Geneva Conventions and international law more generally.

The Israeli military justified the attack on an unarmed American peace protester as a ‘justifiable act of war.’ (He is in a perhaps permanent coma).

Much of the US press, as usual, is ignoring the belligerent statements of Likudniks in the Israeli government and misrepresenting the Palestinians, whose statelessness (and consequent lack of human and legal rights) is imposed on them by a brutal Israeli military occupation and/or perpetual siege and blockade.

If there is going to be a two-state solution, as Obama insists and toward which the Fatah government in the West Bank is now moving quickly, it will depend on level-headed Israelis who recognize that the occupation of the Palestinians is actually a threat to Israel. I’m not optimistic that the rumored turn to a harder line against Iran by Obama in return for a Likud acquiescence in a Palestinian state will actually work. A gasoline boycott on Iran won’t be effective, and the Likud will likely drag its feet so that in the end it will get everything its leaders want– no real Palestinian state, continued subjection and exploitation of the Palestinians, and plus bad US-Iran relations and sanctions on Iran.

Now may be a time for Avi Shaked, the multi-billionaire internet entrepreneur, to make another offer.

On April 4, 2009, Haaretz revealed that Avi Shaked had been an extremely influential figure in the Geneva Accord Track II negotiations between liberal Israelis and the Palestinians.

In 2006, Shaked made headlines by offering then Prime Minister Ehud Olmert and Palestinian Authority President Mahmoud Abbas a billion dollars. (H/t to this poker site for preserving this news item) if only they would just make peace already. Given how corrupt both governments are, it is amazing that no one took Shaked up on his offer.

I’m being a little tongue in cheek, of course. But influential and prominent pro-peace Israelis like Shaked do exist, and even the right of center Kadima Party has accepted the need for two states. I keep hoping that Netanyahu’s government will fall and that those Israelis who want to do the right thing, for themselves and for the Palestinians, will get in in time for Obama to finally settle this dispute, which has poisoned the Middle East against the United States and generates enormous violence and tragedy on both sides.