Frank Rich : Scaring Up the Vote 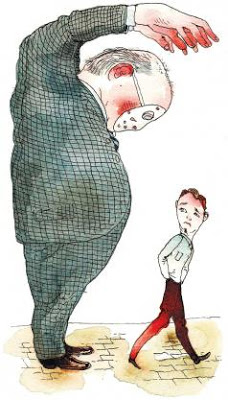 Don’t fault Charles Black, the John McCain adviser, for publicly stating his honest belief that a domestic terrorist attack would be ‘a big advantage’ for their campaign and that Benazir Bhutto’s assassination had ‘helped’ Mr. McCain win the New Hampshire primary. His real sin is that he didn’t come completely clean on his strategic thinking.

In private, he is surely gaming this out further, George Carlin-style. What would be the optimum timing, from the campaign’s perspective, for this terrorist attack – before or after the convention? Would the attack be most useful if it took place in a red state, blue state or swing state? How much would it ‘help’ if the next assassinated foreign leader had a higher name recognition in American households than Benazir Bhutto?

Unlike Hillary Clinton’s rumination about the Bobby Kennedy assassination or Barack Obama’s soliloquy about voters clinging to guns and faith, Mr. Black’s remarks were not an improvisational mishap. He gave his quotes on the record to Fortune magazine. He did so without thinking twice because he was merely saying what much of Washington believes. Terrorism is the one major issue where Mr. McCain soundly vanquishes his Democratic opponent in the polls. Since 2002, it’s been a Beltway axiom akin to E=mc2 that Bomb in American City=G.O.P. Landslide.

That equation was the creation of Karl Rove. Among the only durable legacies of the Bush presidency are the twin fears that Mr. Rove relentlessly pushed on his client’s behalf: fear of terrorism and fear of gays. But these pillars are disintegrating too. They’re propped up mainly by political operatives like Mr. Black and their journalistic camp followers – the last Washington insiders who are still in Mr. Rove’s sway and are still refighting the last political war.

That the old Rove mojo still commands any respect is rather amazing given how blindsided he was by 2006. Two weeks before that year’s midterms, he condescendingly lectured an NPR interviewer about how he devoured ’68 polls a week’ – not a mere 67, mind you – and predicted unequivocally that Election Day would yield ‘a Republican Senate and a Republican House.’ These nights you can still find Mr. Rove hawking his numbers as he peddles similar G.O.P. happy talk to credulous bloviators at Fox News.

But let’s put ourselves in Mr. Black’s shoes and try out the Rove playbook at home – though not in front of the children – by thinking the unthinkable. If a terrorist bomb did detonate in an American city before Election Day, would that automatically be to the Republican ticket’s benefit?

Not necessarily. Some might instead ask why the Bush White House didn’t replace Michael Chertoff as secretary of homeland security after a House report condemned his bungling of Katrina. The man didn’t know what was happening in the New Orleans Convention Center even when it was broadcast on national television.

Next, voters might take a hard look at the antiterrorism warriors of the McCain campaign (and of a potential McCain administration). This is the band of advisers and surrogates that surfaced to attack Mr. Obama two weeks ago for being ‘naïve’ and ‘delusional’ and guilty of a ‘Sept. 10th mind-set’ after he had the gall to agree with the Supreme Court decision on Gitmo detainees. The McCain team’s track record is hardly sterling. It might make America more vulnerable to terrorist attack, not less, were it in power.

Take – please! – the McCain foreign policy adviser, Randy Scheunemann. He was the executive director of the so-called Committee for the Liberation of Iraq, formed in 2002 (with Mr. McCain on board) to gin up the war that diverted American resources from fighting those who attacked us on 9/11 to invading a nation that did not. Thanks to that strategic blunder, a 2008 Qaeda attack could well originate from Pakistan or Afghanistan, where Osama bin Laden’s progeny, liberated by our liberation of Iraq, have been regrouping ever since. On Friday the Pentagon declared that the Taliban has once more ‘coalesced into a resilient insurgency.’ Attacks in eastern Afghanistan are up 40 percent from this time last year, according to the American commander of NATO forces in the region.

Another dubious McCain terror expert is the former C.I.A. director James Woolsey. He (like Charles Black) was a cheerleader for Ahmad Chalabi, the exiled Iraqi leader who helped promote phony Iraqi W.M.D. intelligence in 2002 and who is persona non grata to American officials in Iraq today because of his ties to Iran. Mr. Woolsey, who accuses Mr. Obama of harboring ‘extremely dangerous’ views on terrorism, has demonstrated his own expertise by supporting crackpot theories linking Iraq to the 1995 Oklahoma City bombing and 1993 World Trade Center bombing. On 9/11 and 9/12 he circulated on the three major networks to float the idea that Saddam rather than bin Laden might have ordered the attacks.

Then there is the McCain camp’s star fearmonger, Rudy Giuliani, who has lately taken to railing about Mr. Obama’s supposed failure to learn the lessons of the first twin towers bombing. The lesson America’s Mayor took away from that 1993 attack was to insist that New York City’s emergency command center be located in the World Trade Center. No less an authority than John Lehman, a 9/11 commission member who also serves on the McCain team, has mocked New York’s pre-9/11 emergency plans as ‘not worthy of the Boy Scouts.’

If there’s another 9/11, it’s hard to argue that this gang could have prevented it. At least Mr. Obama, however limited his experience, has called for America to act on actionable terrorist intelligence in Pakistan if Pervez Musharraf won’t. Mr. McCain angrily disagreed with that idea. The relatively passive Pakistan policy he offers instead could well come back to haunt him if a new 9/11 is launched from the Pakistan-Afghanistan border.

Should there be no new terrorist attack, the McCain camp’s efforts to play the old Rove 9/11 fear card may quickly become as laughable as the Giuliani presidential campaign. These days Americans are more frightened of losing their jobs, homes and savings.

But you can’t blame the McCain campaign for clinging to terrorism as a political crutch. The other Rove fear card is even more tattered. In the wake of Larry Craig and Mark Foley, it’s a double-edged sword for the G.O.P. to trot out gay blades cavorting in pride parades in homosexual-panic ads.

Some on the right still hold out hope otherwise. After the California Supreme Court’s decision on same-sex marriage, The Weekly Standard suggested that a brewing backlash could put that state’s ‘electoral votes in play.’ But few others believe so, including the state’s Republican governor, Arnold Schwarzenegger, who has vowed to enforce the law and opposes a ballot initiative to overturn it. Even Bill O’Reilly recently chastised a family-values advocate for mounting politically ineffectual arguments against same-sex marriage.

Mr. McCain is trying to swing both ways. While he no longer refers to the aging old-guard cranks of the religious right as ‘agents of intolerance,’ his actions, starting with his tardy disowning of the endorsement he sought from the intolerant Rev. John Hagee, sometimes speak as loudly as his past words.

The Ohio operative behind that state’s 2004 anti-same-sex marriage campaign was so alienated by Mr. McCain’s emissaries this year that he told The Los Angeles Times, ‘He doesn’t want to associate with us, and we don’t want to associate with him.’ Mr. McCain instead associated himself with Ellen DeGeneres. He visited her talk show to extend his good wishes for her forthcoming California nuptials while seeming almost chagrined to admit his opposition to same-sex marriage, a stand he shares with Mr. Obama. Since then, Mr. McCain has met with the gay Log Cabin Republicans.

He and Mr. Obama also share the antipathy of James Dobson, the Focus on the Family fulminator so avidly courted by the Bush White House. Perhaps best remembered for linking the cartoon character SquareBob SpongePants to a ‘pro-homosexual video,’ Mr. Dobson last week used the word ‘fruitcake’ in a rant against Mr. Obama. He has been nearly as dyspeptic, if not quite as ‘fruit’-fixated, about Mr. McCain.

Mr. Dobson’s embarrassing lashing out is the last gasp of an era. His dying breed of family-values scold is giving way to a new and independent generation of evangelical leaders (and voters) who don’t march to the partisan beat of Mr. Rove or his one-time ally, the disgraced Ralph Reed. Perhaps in belated recognition of this reality, Mr. Rove has been busy lately developing a new fear card for 2008 – fear of the Obamas.

Its racial undertones are naked enough. Earlier this year, Mr. Rove wrote that Mr. Obama was ‘often lazy,’ and that his ‘trash talking’ during a debate was ‘an unattractive carry-over from his days playing pickup basketball at Harvard.’ Last week Mr. Rove caricatured him as the elitist ‘guy at the country club with the beautiful date.’ Provocative as it is to inject Mr. Obama into a setting historically associated with white Republicans, the invocation of that ‘beautiful date’ is even more so. Where’s his beautiful wife? Mr. Rove’s suggestion that Mr. Obama might be a sexual freelancer, as an astute post at the Web site Talking Points Memo noted, could conjure up for a certain audience the image of ‘a white woman on his arm.’

But here, too, Mr. Rove reeks of the past. Should Mr. Black and Mr. McCain follow this ugly lead, I bet it will help them even less than the assassination of Benazir Bhutto.