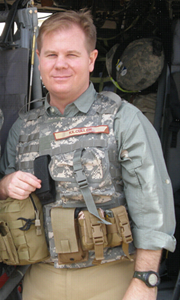 DAVID Kilcullen, the Australian counter-insurgency expert who advises US Secretary of State Condoleezza Rice, has stepped into a political minefield after being quoted as saying the decision to invade Iraq was “f..king stupid”.

The comments were seized on by left-leaning blogs as lending weight to Democratic presidential candidate Barack Obama, whose early opposition to the war is one of the central themes of his campaign.

Dr Kilcullen told The Weekend Australian yesterday that he had been misquoted, but in a lengthy blog he posted this week on the Small Wars Journal website he did not deny the comment, saying the journalist reporting it “did not clear the quote with me”.

Dr Kilcullen, 41, has had a rapid rise to the top of the US military and diplomatic establishment, in part because of his straightforward approach.

He had said previously the Iraqi invasion would be tougher than the Bush administration had anticipated, but his blunt statement this week shocked Washington insiders.

Dr Kilcullen, the chief author of Counterinsurgency: A Guide for Policy-makers, explained to the online newspaper the Washington Independent that the handbook, to be released late this year, tells policy-makers to “think very, very carefully before intervening”.

Journalist Spencer Ackerman then wrote: “More bluntly, Kilcullen, who helped (General David) Petraeus design his 2007 counterinsurgency strategy in Iraq, called the decision to invade Iraq “stupid’ – in fact, he said ‘f..king stupid’ – and suggested that if policy-makers apply the manual’s lessons, similar wars can be avoided in the future.”

Dr Kilcullen said on Small Wars that the journalist “did not seek to clear that quote with me, and I would not have approved it if he had”.

“If he had sought a formal comment, I would have told him what I have said publicly before: in my view, the decision to invade Iraq in 2003 was an extremely serious strategic error.

“But the task of the moment is not to cry over spilt milk, rather to help clean it up: a task in which the surge, the comprehensive counterinsurgency approach, and our troops on theground are admirably succeeding,” he said.

Asked if the comments damaged his position at the State Department, a spokesman told The Weekend Australian: “David never claims to have said what you say he said. I believe this is much ado about nothing. As he says himself, his views in general have been pretty clear.”

Dr Kilcullen, who has been described as one of the most influential Australian military minds of his generation, grew up on Sydney’s north shore.

He studied counterinsurgency as a cadet at Duntroon, served for more than 20 years in the Australian army and was awarded a PhD in political science from the University of NSW for a thesis on Indonesian insurgent and terrorist groups and counterinsurgency methods.

Senator Obama has consistently stated that he opposed the war and that it would stoke anti-US feelings in the Muslim world. But he opposed the surge in troops, while his Republican opponent John McCain supported the invasion and a surge well before the Bush administration finally decided to send more soldiers in January last year.

This entry was posted in RagBlog and tagged Bush Administration, Iraq War. Bookmark the permalink.