Frida Berrigan : U.S. and Israel: Up in Arms 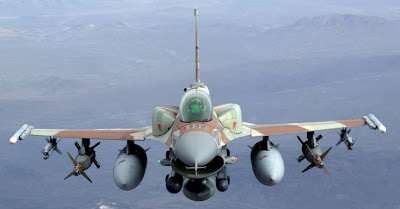 Israel has 226 U.S.-supplied F-16 fighter and attack jets.
‘Those who seek peace in the Middle East, who refuse to “give up” on it, must insist that the United States stop funding and fueling the war.’

In answering questions before the Senate Foreign Relations Committee, Secretary of State-designate Hillary Clinton acknowledged what she called the “tragic humanitarian costs of conflict in the Middle East, and the pain and suffering of Palestinian and Israeli civilians.” She continued by saying that “we cannot give up on peace.”

As the bombardment of Gaza enters its third week and the civilian death toll continues to rise, Clinton’s remarks offer a thin ray of hope that the next president will deviate from the long-set pattern of U.S.-Israeli relations.

The Bush administration has been unwilling to use the considerable U.S. influence — as Israel’s major military and political backer — to dissuade the government in Tel Aviv from its pattern of claiming self-defense while perpetrating collective punishment, human rights violations, and massively disproportionate attacks that harm and kill civilians.

If the next administration is making a genuine commitment to “a just and lasting peace that brings real security to Israel, normal and positive relations with its neighbors; independence, economic progress and security to the Palestinians in their own state” — as Hillary Clinton described the vision for the future — they will have their work cut out for them.

That work begins with a reevaluation of the financial and military commitment the United States made to Israel. During the Bush administration, Israel received over $21 billion in U.S. security assistance, including $19 billion in direct military aid under the Pentagon’s Foreign Military Financing (FMF) program. Through the FMF program, Israel remains the single largest recipient of U.S. military aid each year, which they use to purchase U.S. weapons.

The bulk of Israel’s current arsenal is composed of equipment supplied under U.S. assistance programs. For example, , over 700 M-60 tanks, 6,000 armored personnel carriers, and scores of transport planes, attack helicopters, utility and training aircraft, bombs, and tactical missiles of all kinds.

Hardware continues to flow in, despite the fact the Arms Export Control Act (AECA) requires nations receiving U.S. arms to certify the weapons are used for internal security and legitimate self-defense, and that their use doesn’t lead to an escalation of conflict. During 2008 alone, the United States made over $22 billion in new arms sales offers to Israel, including a proposed deal for as many as 75 F-35 Joint Strike Fighters, worth up to $15.2 billion; nine heavy transport aircraft, worth up to $1.9 billion; four Littoral Combat Ships and related equipment, worth as much as $1.9 billion; and up to $1.3 billion in gasoline and jet aviation fuel.

One lone congressman — Dennis Kucinich (D-OH) — raised concerns about Israel’s possible violations of the AECA. He hasn’t had a response from the State Department. What use are our laws if they are not followed?

The last time the United States cut off military aid and weapons transfers to Israel was in 1981. During Israel’s incursion into Lebanon, the Reagan administration cut off U.S. military aid and arms deliveries for 10 weeks while it investigated whether Israel was using weapons for “defensive purposes,” as required under U.S. law.

The United States lifted the ban after Secretary of State Alexander Haig suggested that one could “argue until eternity” about whether a given use of force was offensive or defensive.

Since then, the United States has investigated Israel’s use of U.S.-origin weapons in relationship to the AECA a few times, most notably in 2006, when Israel let loose on southern Lebanon with millions of cluster bomblets. The State Department Office of Defense Trade Controls investigated the situation, and informed Congress with preliminary findings indicating Israel may have violated agreements by using cluster bombs against civilian-populated areas. According to a January 2008 Congressional Research Service report, Israel denied violating agreements, saying that it had acted in self-defense, and a final determination wasn’t made.

The issue was dropped and weapons transfers continued.

Those who seek peace in the Middle East, who refuse to “give up” on it, must insist that the United States stop funding and fueling the war.

What can Obama do differently? Enforce the AECA in a uniform and dispassionate way. Given the close political and military ties between the United States and Israel, Haig’s observation is a cover for inaction, and worse. While the finer points of offense and defense are being argued “until eternity,” U.S.-origin weapons are killing women and children.

[Foreign Policy In Focus columnist Frida Berrigan is a senior program associate at the Arms and Security Project of the New America Foundation. Information in this piece is drawn from the Arms and Security Initiative’s new report,U.S. Weapons at War 2008: Beyond the Bush Legacy, on the global impact of U.S. arms exports and military assistance.]