From the Iraqi-Turkish Border : Airstrikes or Apples? 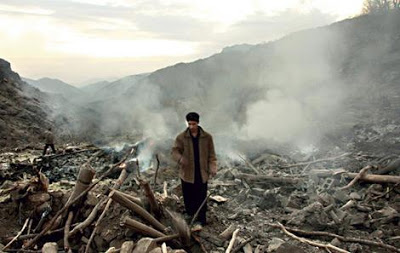 Survivor surveys results of Turkish air strike against Kurdish PKK in northern Iraq, this from April, 2008.
Airstrikes or Apples?

MERKEGIA, Iraq — At the unpaved end of the road near Iraq’s border with Turkey lies the tiny village of Merkegia. The coral pink buildings and church stand in contrast to the lush green of Kurdistan. A few families have ventured back to their apple orchards — famous even in far away Baghdad — despite Turkish forts and tanks at bases inside Iraq that they must pass each day to reach their town.

The villagers celebrate St. George’s Day, hopeful that they will be able to harvest their crops this year — if Turkish airstrikes cease.

“We only want to live peaceably and harvest our apples,” says one resident who returned with his family to the town that once held more than 100 families. They don’t understand why their own central government, along with the United States, doesn’t stop Turkey from bombing.

As we travel to other villages we hear a similar refrain. “In past years, Saddam tried to empty our villages and kill our families,” says the father of a displaced family. “Now, it appears that others want to do the same.” More than 190 villages in the region have been attacked and their families forced to flee from airstrikes during the past two years — even as recently as a week ago. Bridges to their homes have been destroyed as well and the land is littered with mines, cluster bombs and other unexploded ordinance.

When asked, officials in Ankara claim that armed insurgents with the Kurdistan Workers Party (PKK) have crossed over into Iraq from Turkey. The villagers say there may be PKK in the mountains, but not in their towns so they can’t understand why their rural livelihood is under attack. The faces of their children, eager to play amidst the trees and fields, don’t reflect the fears and sadness of those who have witnessed the ongoing destruction of this bountiful land. They only know that today is a beautiful Sunday.

This entry was posted in Rag Bloggers and tagged Iraq, Kurdistan, Turkey. Bookmark the permalink.