Tancredo Confrontation at Chapel Hill : An Inside View 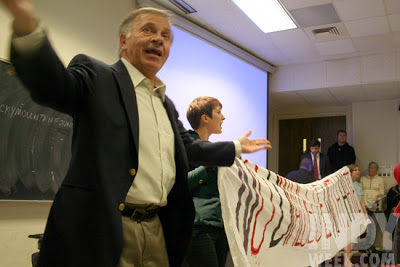 Vocal demonstrators in Chapel Hill, N.C., shut down a campus appearance by former Republican Congressman Tom Tancredo, an anti-immigrant activist, who had been invited to speak before a white supremacist group, the Youth for Western Civilization.

CHAPEL HILL, N.C. — Students at University of North Carolina (UNC) at Chapel Hill made national headlines last week when they confronted the racist ex-congressman Tom Tancredo. 200 students marched, shouted down, or silently protested Tancredo. When 60 students chanted in the lobby of the building where he was to speak, police attacked the demonstration with pepper spray. Two women were thrown to the floor, another protester had her hair pulled by a cop and several people were pushed into the walls. The police drove the students out by threatening them with tasers. Shortly after we were pushed out, a window was broken and the event was shut down.

Thousands of articles, commentaries, and editorials have been written on this event. Most of it is a waste of everyone’s time. In typical mainstream media fashion, most of the coverage has completely turned reality on its head. Like Malcolm X would have said, they make the victim look like the villain and the oppressors look like the oppressed.

These “respectable” ruling class commentators — who incidentally don’t give a damn about the most basic human rights of 11 million undocumented immigrants, or the respect and dignity they deserve as human beings — assume the absolute right of racists like Tancredo to say or do whatever they want, anywhere they want. But the minute the oppressed fight back, some kind of horrendous crime against “democracy” and “free speech” has been committed!

So let’s get some things straight.

Tancredo was invited by a new right-wing, racist organization, Youth for Western Civilization (YWC). Who is YWC? Their mission statement says they work “to create a culture that will promote the survival of Western Civilization and pride in Western heritage.” Compare that to the Ku Klux Klan, who say they are a “white rights political organization working to promote western Christian civilization.”

Do you see a substantive difference? I don’t.

The one-time Republican presidential contender and a former congressman from Colorado, Tancredo is honorary chair of YWC. Last year Tancredo advocating bombing Mecca and Medina to deter ‘terrorism.’ He spoke at a League of the South event in 2006, where, surrounded by confederate flags and portraits of Robert E. Lee, Tancredo joined the all-white audience in singing the confederate anthem, Dixie. Tancredo and his policies are celebrated by Neo-Nazis and on white supremacist websites like Vdare and Storm Front (don’t mind their racist banter about killing immigrants, Jews, and non-whites — it’s freedom of speech, you see).

Tancredo supports the Minutemen, a pack of racist vigilantes who beat up, assault and sometimes kill undocumented immigrants — or anyone with brown skin. He advocates deporting all 11 million undocumented workers in this country. He supports militarizing the border with Mexico. His politics destroy immigrant families. He supports the ICE concentration camps that are crammed with hundreds of thousands of undocumented workers, denied any kind of due process or basic rights. He demands that immigrants ‘assimilate’ to white supremacist culture. Tancredo threatens that, “they [immigrants] are coming here to kill you, and you, and me, and my grandchildren.”

There is more, but you get the point.

Now some people say this guy has just as much a right to speak as anybody else. I don’t. Right-wingers and liberals alike are crying about protesters violating the sanctity of “free speech.” The North Carolina ACLU went so far as to say the protesters engaged in censorship. This just doesn’t hold up. Tancredo can get on any major news media, any day of the week, and preach his hateful message slamming immigrants. And in fact he did that the very next day.

That 200 students rose up to drown this hate speech out is not censorship or violating Tancredo’s “freedom of speech.”

The solidarity statement from United Students Against Sweatshops makes this point perfectly clear: “There is nothing in the First Amendment that guarantees anyone the right to a quiet audience or lack of a community response. In fact, the First Amendment actively encourages and protects a community response — including a loud, disruptive response — to people with the power of former Congressman Tancredo and the anti-immigrant policies he represents.”

A community rising up to deny racists from organizing isn’t censorship, it is justice.

Chancellor Holden Thorp, UNC-system president Erskine Bowles and the UNC board of trustees chair Roger Perry called Tancredo to apologize for the disruption. In other words, all three of the most important figures in UNC’s hierarchy called to apologize to a racist white supremacist. How revealing! Why not apologize to the students who felt threatened by the appearance of a politician who openly preaches hate and supports organizations that commit violence against immigrants? Why not apologize for the police violence that silenced the student protesters’ right to free speech? Why are they not apologizing for allowing this racist bigot to speak at UNC in the first place?

In fact, the students who protested Tancredo’s event have nothing to apologize for. The protesters are fully justified. It is a good thing that he was stopped. If he comes back, we will confront him again. If the Youth for Western Civilization think they can continue to bring white supremacists and advocates for violence against immigrants and oppressed nationalities, they are sorely mistaken. The people won’t stand for it.

It’s true that there were conflicts between the tactics used by different organizations to protest Tancredo, and those organizations will need to dialog to address the conflict of tactics and aims. But I firmly believe that what unites us is more powerful than what divides us. In the face of media criticism and harsh institutional oppression, we can and must stand shoulder to shoulder in opposition to white supremacy and all it stands for in the fields of North Carolina, on the border with Mexico and in the homes and families of over 11 million beautiful human beings who come to this country to work and to support their families.

At the end of the day, what happened was a great thing. Tancredo and his whole racist anti-immigrant program were shut down and sent packing. That is a victory for the people’s struggle and no amount of slander, disinformation and repression of the protesters can cover up this vital fact.

[Kosta Harlan is a member of Students for a Democratic Society and was a participant in the protest of Tancredo and Youth for Western Civilization. He also posted this article to Fight Back! and to Facebook.]