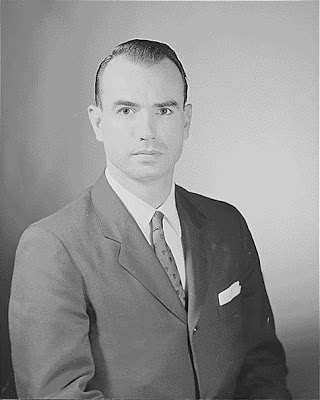 Portrait of Special Agent George G. Liddy (now known as G. Gordon Liddy). Item from Record Group 65: Records of the Federal Bureau of Investigation, 1896-1994.
McCain has openly supported Liddy, an ‘unrepentent terrorist who plotted the assassination of a journalist and encouraged the murder of federal law enforcement agents.’
By John K. Wilson / October 17, 2008

It’s not Joe the Plumber that matters, it’s G. Gordon Liddy the “Plumber” of Watergate fame. David Letterman’s interview with McCain last night should prove to be absolutely devastating to the McCain campaign, if we don’t let the mainstream media ignore McCain’s relationship to Liddy while they obsess about Bill Ayers.

John McCain has defended Liddy, an ex-felon who was part of Watergate, one of the worst abuses of executive power in American history.

John McCain has knowingly attended a fundraiser at the home of Liddy, an unrepentent terrorist who plotted the assassination of a journalist and encouraged the murder of federal law enforcement agents. Yet John McCain just a year ago declared that he was “proud” of this man.

Here’s a summary of all the crimes of G. Gordon Liddy, the responses of John McCain, and the questions that need to be asked:

DL: But did you not have a relationship with Gordon Liddy?

DL: Didn’t you attend a fundraiser at his house? JM: Gordon Liddy’s?

“I met him”? “I met him”? And when you’re asked about attending a fundraiser at his house, you don’t answer? You don’t admit that Liddy hosted a fundraiser for you in 1998? You just say, “Gordon Liddy’s?” as if you don’t know what Letterman’s talking about?

After the commercial break, McCain quickly tried to explain himself:

DL: But you understand that the same case could be made of your relationship with him as is being made with William Ayers.

JM: Everything about any relationship that I’ve had I will make completely open and give a complete accounting of. Senator Obama said that he was a guy who lived in the neighborhood. OK, it was more than that.

Note this: McCain said that Liddy’s son is “also a good friend and supporter of mine.” That means McCain is saying that Liddy himself is friend of his. Contrast that with Obama, who has never called Ayers his friend (David Axelrod described them as “friendly,” which is much different).

Liddy did go to prison for Watergate. Does McCain mean to say that it’s okay to pal around with criminals so long as they’ve served time in prison? (Ayers, by the way, did turn himself him; he was never convicted of a crime due to technicalities. Would McCain claim that it would be okay to hang out with Ayers if he had spent time in prison?)

But Liddy’s never served any time in prison for urging the murder of federal law enforcement officials, or for plotting the assassination of a newspaper columnist, or for encouraging the murder of possible burglars, or for illegally using firearms despite being an ex-felon. So by McCain’s logic, Liddy has never paid his debt for those actions.

McCain claims, “Senator Obama said that he was a guy who lived in the neighborhood. OK, it was more than that.” It was.

As Obama actually said: “This is a guy who lives in my neighborhood, who’s a professor of English in Chicago, who I know and who I have not received some official endorsement from. He’s not somebody who I exchange ideas with on a regular basis.” There’s nothing false about that.

According to a McCain TV ad, “Obama’s blind ambition. When convenient, he worked with terrorist Bill Ayers. When discovered, he lied. Obama. Blind ambition. Bad judgment.” The Washington Post fact checker concluded, “The McCain campaign is distorting the Obama-Ayers relationship, and exaggerating their closeness. There is no evidence that Obama has ‘lied’ about his dealings with Ayers.”

But you could make the same exact argument that when McCain said about Liddy, “I met him,” it was definitely “more than that.” If somebody hosts a fundraiser for you, do you honestly describe your relationship as “I met him”? McCain, unlike Obama, was lying about his relationship. McCain, unlike Obama, was actually defending an unrepentant terrorist. 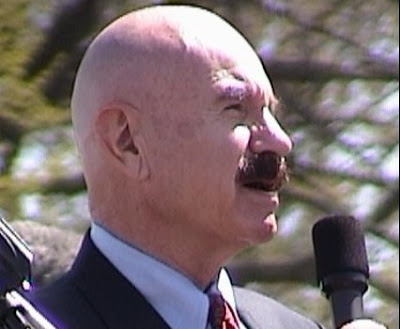 Liddy (with mustache) in disguise.
In 2007, McCain went on Liddy’s radio show and told him:

I’m proud of you, I’m proud of your family….It’s always a pleasure for me to come on your program, Gordon, and congratulations on your continued success and adherence to the principles and philosophies that keep our nation great.

By contrast, Obama has never said that he’s “proud” of Bill Ayers

What are Liddy’s crimes? Let’s go through the details. G. Gordon Liddy is a lunatic who grew up admiring Hitler. But what really matters are his crimes. Watergate alone should be a good enough reason for any presidential candidate to avoid any association with the man whose criminal activities helped to bring down Richard Nixon.

However, Liddy’s plotting of crimes went far beyond the Watergate break-in.

At the Committee to Re-Elect the President,

Liddy concocted several plots, some far-fetched, intended to embarrass the Democratic opposition. These included firebombing the Brookings Institution in Washington, D.C. (where classified documents leaked by Daniel Ellsberg were being stored), kidnapping anti-war protest organizers and transporting them to Mexico during the Republican National Convention (which at the time was planned for San Diego), and luring mid-level Democratic campaign officials to a house boat in Baltimore where they would be secretly photographed in compromising positions with call girls. Most of Liddy’s ideas were rejected, but a few were given the go ahead by Nixon Administration officials, including the break-in at Daniel Ellsberg’s psychiatrist’s office.

Liddy has Source revealed that he was prepared to murder someone “if necessary” during the Ellsberg break-in. He also said that he “plotted with a ‘gangland figure’ to murder Howard Hunt to prevent him from cooperating with investigators.”

Does John McCain support murdering people? How about kidnapping protesters? Firebombing liberal think tanks? Why is McCain defending this man?

Liddy also plotted the assassination of a journalist:

“In 1980, Liddy published an autobiography, titled Will, which sold more than a million copies and was made into a television movie. In it he states that he once made plans with Hunt to kill journalist Jack Anderson, based on a literal interpretation of a Nixon White House statement we need to get rid of this Anderson guy.”

Liddy has never expressed regret for this. In fact, in 2004, Liddy explicitly embraced the idea of murdering columnists: “If they were traitors as Jack Anderson was, directly helping the enemy, then yes.”

So, does John McCain support the murder of journalists?

Liddy also openly violates gun laws. As an ex-felon, he’s banned from owning guns. In 1990, I heard him speak at the University of Illinois and brag about how his wife owned a large collection of guns which she conveniently keeps under his side of the bed. Later in the 1990s, “he mentioned labeling targets ‘Bill’ and ‘Hillary’ when he practiced shooting.” Does McCain think that ex-felons like Liddy should have guns? Does he approve of Liddy naming his shooting targets after the President and First Lady?

And then there’s this well-known terrorism advocated by G. Gordon Liddy on his radio show, August 26, 1994:

“Now if the Bureau of Alcohol, Tobacco and Firearms comes to disarm you and they are bearing arms, resist them with arms. Go for a head shot; they’re going to be wearing bulletproof vests….They’ve got a big target on there, ATF. Don’t shoot at that, because they’ve got a vest on underneath that. Head shots, head shots…. Kill the sons of bitches.”

“If the Bureau of Alcohol, Tobacco and Firearms insists upon a firefight, give them a firefight. Just remember, they’re wearing flak jackets and you’re better off shooting for the head.”

Here’s how Liddy later explained himself:

“The law is that if somebody is shooting at you, using deadly force, the mere fact that they are a law enforcement officer, if they are in the wrong, does not mean you are obliged to allow yourself to be killed so your kinfolk can have a wrongful death action. You are legally entitled to defend yourself and I was speaking of exactly those kind of situations. If you’re going to do that, you should know that they’re wearing body armor so you should use a head shot. Now all I’m doing is stating the law, but all the nuances in there got left out when the story got repeated.”

Of course, that’s not true (you’re not legally entitled to kill law enforcement officers, even if they are in the wrong). But it’s also not what Liddy said. Remember: “if the Bureau of Alcohol, Tobacco and Firearms comes to disarm you and they are bearing arms, resist them with arms.” Liddy was talking about ATF agents “bearing arms,” not shooting at people. He was talking about ATF agents trying to “disarm” people, not kill them.

In 1998, Liddy hosted a fundraiser for McCain, and has given his campaigns $5,000, including $1,000 to McCain’s current presidential campaign.

By contrast, Ayers never hosted a fundraiser for Obama (it was a meet-and-greet in 1995), and at the time Obama didn’t know about Ayers’ past. Ayers gave Obama a small donation in 2000, but nothing recently.

How do we know that McCain knew about Liddy’s comments? Because it was mentioned in a Washington Post story on May 18, 1995, which noted that Liddy had been “disinvited from a recent GOP fund-raiser because of his embarrassing exhortations to shoot pesky federal law enforcement officers.” That same article discussed McCain joking around at an event with Liddy about his psychotic propensity to burn himself.

Let’s be clear-cut about this:

If you urge people to shoot federal agents in the head, you are encouraging terrorism.

If you plot the firebombing of a liberal organization, you are plotting terrorism.

If you plan the assassination of a journalist and thirty years later still embrace the idea, you are an unrepentant terrorist.

Do you disagree, John McCain?

You say, “Everything about any relationship that I’ve had I will make completely open and give a complete accounting of.” So let’s hear it: do you think this is terrorism? And why are you “proud” of this unrepentant terrorist?

McCain claims, “I think not only a repudiation but an apology for ever having anything to do with an unrepentant terrorist is due the American people.” We’re waiting for our apology, Senator McCain.