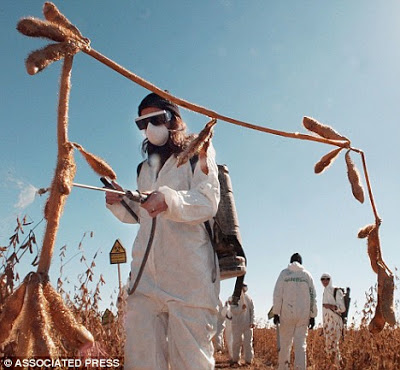 These folks are pushing Genetically Modified crops (GMO’s) onto the Third World in the name of ending hunger, much as the Rockefellers did with the ‘Green Revolution’ that was used to open world markets to chemical and hybrid agriculture.

Walden Bello has written a chilling essay about “The Coming Capitalist Consensus” [see below] for Foreign Policy In Focus.

This is one of the most succinct articles I have read on what we face right now. This is the beguiling rhetoric that has been brewing for the past five to eight years. If you notice, you have Bill Gates, and George Soros listed as part of this pack; they are joined by the Rockefeller brothers in Arkansas, The World Bank and other Capitalist cheerleaders.

The first so called revolutions killed millions of villagers around the world, just as now the GMO giant Monsanto is steamrolling India into the second go round of “squeezing blood from a turnip” which has resulted in unprecedented suicides among farmers who have lost their farmland to bad debt incurred from this unholy technology.

No one has talked to the farmers of India or of Africa as Gates and the Rockefellers put their millions to work convincing the various governing bodies in those countries to get on board the gravy train. They have managed to get Kofi Annan to sign on. This whole campaign is driven with the cynical appeal to world hunger which is a perfect neoliberal slogan to convince the ignorant and environmental poseurs of the campaign’s good intentions.

While we are focused on major bank greed and bailouts the uber rich are plotting control of the world’s food! What is really unsettling about this is that I think that Gates, and perhaps Soros think that they are doing a good thing. Being rich, unfortunately, doesn’t mean you have to be smart. The World Bank, on the other hand, knows exactly what it’s doing.

[ScottPittman, a former Austin activist and contributor to The Rag in Sixties Austin, is director of the Permaculture Institute.]

Not surprisingly, the swift unraveling of the global economy combined with the ascent to the U.S. presidency of an African-American liberal has left millions anticipating that the world is on the threshold of a new era. Some of President-elect Barack Obama’s new appointees – in particular ex-Treasury Secretary Larry Summers to lead the National Economic Council, New York Federal Reserve Board chief Tim Geithner to head Treasury, and former Dallas Mayor Ron Kirk to serve as trade representative – have certainly elicited some skepticism. But the sense that the old neoliberal formulas are thoroughly discredited have convinced many that the new Democratic leadership in the world’s biggest economy will break with the market fundamentalist policies that have reigned since the early 1980s.

One important question, of course, is how decisive and definitive the break with neoliberalism will be. Other questions, however, go to the heart of capitalism itself. Will government ownership, intervention, and control be exercised simply to stabilize capitalism, after which control will be given back to the corporate elites? Are we going to see a second round of Keynesian capitalism, where the state and corporate elites along with labor work out a partnership based on industrial policy, growth, and high wages – though with a green dimension this time around? Or will we witness the beginnings of fundamental shifts in the ownership and control of the economy in a more popular direction? There are limits to reform in the system of global capitalism, but at no other time in the last half century have those limits seemed more fluid.

President Nicolas Sarkozy of France has already staked out one position. Declaring that “laissez-faire capitalism is dead,” he has created a strategic investment fund of 20 billion euros to promote technological innovation, keep advanced industries in French hands, and save jobs. “The day we don’t build trains, airplanes, automobiles, and ships, what will be left of the French economy?” he recently asked rhetorically. “Memories. I will not make France a simple tourist reserve.” This kind of aggressive industrial policy aimed partly at winning over the country’s traditional white working class can go hand-in-hand with the exclusionary anti-immigrant policies with which the French president has been associated.

A new national Keynesianism along Sarkozyan lines, however, is not the only alternative available to global elites. Given the need for global legitimacy to promote their interests in a world where the balance of power is shifting towards the South, western elites might find more attractive an offshoot of European Social Democracy and New Deal liberalism that one might call “Global Social Democracy” or GSD.

Even before the full unfolding of the financial crisis, partisans of GSD had already been positioning it as alternative to neoliberal globalization in response to the stresses and strains being provoked by the latter. One personality associated with it is British Prime Minister Gordon Brown, who led the European response to the financial meltdown via the partial nationalization of the banks. Widely regarded as the godfather of the “Make Poverty History” campaign in the United Kingdom, Brown, while he was still the British chancellor, proposed what he called an “alliance capitalism” between market and state institutions that would reproduce at the global stage what he said Franklin Roosevelt did for the national economy: “securing the benefits of the market while taming its excesses.” This must be a system, continued Brown, that “captures the full benefits of global markets and capital flows, minimizes the risk of disruption, maximizes opportunity for all, and lifts up the most vulnerable – in short, the restoration in the international economy of public purpose and high ideals.”

Joining Brown in articulating the Global Social Democratic discourse has been a diverse group consisting of, among others, the economist Jeffrey Sachs, George Soros, former UN Secretary General Kofi Annan, the sociologist David Held, Nobel laureate Joseph Stiglitz, and even Bill Gates. There are, of course, differences of nuance in the positions of these people, but the thrust of their perspectives is the same: to bring about a reformed social order and a reinvigorated ideological consensus for global capitalism.

Among the key propositions advanced by partisans of GSD are the following:

The Limits of Global Social Democracy

Global Social Democracy has not received much critical attention, perhaps because many progressives are still fighting the last war, that is, against neoliberalism. A critique is urgent, and not only because GSD is neoliberalism’s most likely successor. More important, although GSD has some positive elements, it has, like the old Social Democratic Keynesian paradigm, a number of problematic features.

A critique might begin by highlighting problems with four central elements in the GSD perspective.

First, GSD shares neoliberalism’s bias for globalization, differentiating itself mainly by promising to promote globalization better than the neoliberals. This amounts to saying, however, that simply by adding the dimension of “global social integration,” an inherently socially and ecologically destructive and disruptive process can be made palatable and acceptable. GSD assumes that people really want to be part of a functionally integrated global economy where the barriers between the national and the international have disappeared. But would they not in fact prefer to be part of economies that are subject to local control and are buffered from the vagaries of the international economy? Indeed, today’s swift downward trajectory of interconnected economies underscores the validity of one of anti-globalization movement’s key criticisms of the globalization process..

Second, GSD shares neoliberalism’s preference for the market as the principal mechanism for production, distribution, and consumption, differentiating itself mainly by advocating state action to address market failures. The kind of globalization the world needs, according to Jeffrey Sachs in The End of Poverty, would entail “harnessing…the remarkable power of trade and investment while acknowledging and addressing limitations through compensatory collective action.” This is very different from saying that the citizenry and civil society must make the key economic decisions and the market, like the state bureaucracy, is only one mechanism of implementation of democratic decision-making.

Third, GSD is a technocratic project, with experts hatching and pushing reforms on society from above, instead of being a participatory project where initiatives percolate from the ground up.

Fourth, GSD, while critical of neoliberalism, accepts the framework of monopoly capitalism, which rests fundamentally on deriving profit from the exploitative extraction of surplus value from labor, is driven from crisis to crisis by inherent tendencies toward overproduction, and tends to push the environment to its limits in its search for profitability. Like traditional Keynesianism in the national arena, GSD seeks in the global arena a new class compromise that is accompanied by new methods to contain or minimize capitalism’s tendency toward crisis. Just as the old Social Democracy and the New Deal stabilized national capitalism, the historical function of Global Social Democracy is to iron out the contradictions of contemporary global capitalism and to relegitimize it after the crisis and chaos left by neoliberalism. GSD is, at root, about social management.

Obama has a talent for rhetorically bridging different political discourses. He is also a “blank slate” when it comes to economics. Like FDR, he is not bound to the formulas of the ancien regime. He is a pragmatist whose key criterion is success at social management. As such, he is uniquely positioned to lead this ambitious reformist enterprise.

While progressives were engaged in full-scale war against neoliberalism, reformist thinking was percolating in critical establishment circles. This thinking is now about to become policy, and progressives must work double time to engage it. It is not just a matter of moving from criticism to prescription. The challenge is to overcome the limits to the progressive political imagination imposed by the aggressiveness of the neoliberal challenge in the 1980s combined with the collapse of the bureaucratic socialist regimes in the early 1990s. Progressives should boldly aspire once again to paradigms of social organization that unabashedly aim for equality and participatory democratic control of both the national economy and the global economy as prerequisites for collective and individual liberation.

[Walden Bello is a columnist for Foreign Policy In Focus, a senior analyst at the Bangkok-based Focus on the Global South, president of the Freedom from Debt Coalition, and a professor of sociology at the University of the Philippines.]