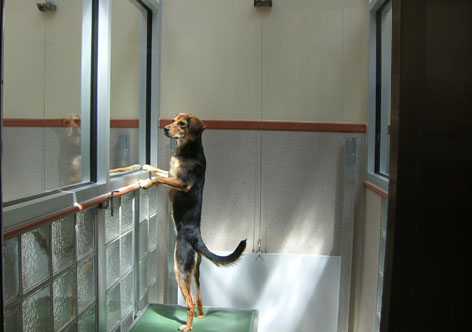 “I’m leavin’ on a jet plane.” Photo by Joyce A. Davis / USA Today.
‘These are wonderful dogs that simply had the bad luck of winding up in a place where there are too many pets in shelters,’ says Pilots N Paws co-founder Jon Wehrenberg.’
By Sharon L. Peters / November 25, 2008

Pilots are donating their time, planes and fuel to transport dozens of dogs a month from overcrowded shelters where they face almost certain death to rescue groups and shelters several states away that are committed to finding them homes.

The mission-of-mercy relocations are flown by general aviation pilots who have signed on with the recently formed Pilots N Paws, a Web-based message board where pilots can access information about animals in need.

Once the electronic connection is made, dogs plucked by rescuers from death row — mostly in the South where sterilization rates are low and pet overpopulation is rampant — are loaded onto small planes and flown one, two or six at a time to rescue groups and shelters that have available space.

“These are wonderful dogs that simply had the bad luck of winding up in a place where there are too many pets in shelters,” says Pilots N Paws co-founder Jon Wehrenberg of Knoxville, Tenn. The retired manufacturing executive and weekend pilot has flown scores of dogs from high-kill shelters this year. Earlier this month, his mission involved six small mixed-breed dogs from Knoxville’s Young-Williams Animal Center.

The happy half-dozen enjoyed a smooth-sailing, 90-minute flight to Greensboro, N.C., where they were met by radio station executive Jennifer Hart, head of Animal Rescue & Foster Program, who had arranged foster care. One dog has been adopted; the others are receiving additional attention, socialization and training and should be ready for new homes soon after Thanksgiving.

Beginning of the journey

“Pilots N Paws has given about 20 of our animals a second chance,” says Tim Adams, executive director of the Young-Williams shelter, which euthanizes 70% of the animals that land there. “We take in 17,000 animals a year, and Knoxville simply isn’t big enough… to get new homes for them here. Twenty animals saved may not sound like much, but every one of them matters.”

Pilots N Paws started operating in February soon after Wehrenberg offered to fly a Doberman in Florida to his pal Debi Boies of Landrum, S.C., who is a retired nurse, horse breeder and long-time rescuer. He began asking questions about the rescue world and learned about the passionate underground railroad of animal lovers who orchestrate days-long road journeys to save some of the 4 million to 6 million animals destined for euthanasia in U.S. shelters annually.

“I’d had no idea of the number of animals being euthanized, and the ordeal people and animals were going through in transports,” Wehrenberg says. “Pilots love to fly. I believed that if we created a means for them to discover situations where they could fly and also save animals, many would do it.”

He and Boies joined forces to spread the word, and within months, 85 pilots had signed on. Nearly 200 dogs have now been flown from several shelters and rescue groups to welcoming arms hundreds of miles away.

“For most of these dogs, the next walk they would have taken would have been to death’s door,” says administrative assistant Dawn Thompson of Falconer, N.Y., who for 18 years has taken in, nursed, socialized and re-homed more than 100 dogs a year from various high-kill areas. In recent months 30 have arrived via Pilots N Paws, and she’s learned the ones that arrive by plane rather than ground transport “don’t have the stress that two days on the road creates, and that makes them almost instantly adoptable.”

‘Doggy kisses’ are worth gas

Each flight costs the pilot hundreds of dollars in fuel alone, not including routine maintenance and other operating expenses. Boies and Wehrenberg are working to gain non-profit status for the group so pilots could declare the fuel costs a charitable contribution. But the pilots aren’t exactly agitating for that.

“Doggy kisses are worth the $6 a gallon,” says Westminster, Md., businesswoman and small-plane pilot Michele McGuire. She was recently part of a two-leg relay that flew a 110-pound skin-and-bones Great Dane from Arab, Ala., where a rescue group saved it from euthanasia, to a new family in Baldwin, Mass.

“I don’t know what (the animals’) opinion of flying is, but it sure makes their trip a lot shorter,” says Nick O’Connell, a Williamsburg, Va., contractor who did his first such flight earlier this month. The two-leg hand-off involved two pilots, several hundred miles and two chow-mix puppies rescued from a dump near Atlanta and delivered to their new family in Chesterfield, Va.

The animals are almost always remarkably calm about the adventure, O’Connell and other pilots report.

“It’s almost as if they understand that this is their chance for life,” Boies says.

Sometimes pilots scroll through the “Transport needed” section of Pilots N Paws and find a plea to fly an animal to a town or city they already were planning to visit.

Most times, however, they study the requests, see a need that touches them and offer their services.

Broomfield, Colo., software engineer/pilot Mike Boyd was involved in a multi-state, multi-person transport of a German shepherd in October, and he’s aiming to do more missions. “To take my hobby and apply it to help this situation, well, it’s just a great feeling,” he says.

Adds O’Connell: “It is rewarding beyond my wildest imagination.”

This entry was posted in RagBlog and tagged Animal Rescue, Dogs. Bookmark the permalink.