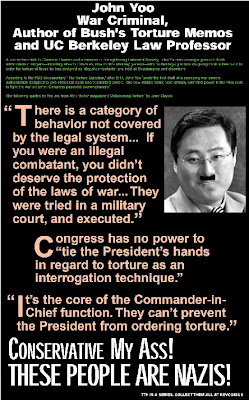 Eleven days after 9/11, John Yoo, a former deputy in the Justice Department’s Office of Legal Counsel, drafted a 20-page memorandum that offered up theories on how Fourth Amendment protections against unreasonable searches and seizures would be applied if the U.S. military used “deadly force in a manner that endangered the lives of United States citizens.”

Yoo came up with a number of different scenarios. He suggested shooting down a jetliner hijacked by terrorists; setting up military checkpoints inside a U.S. city; implementing surveillance methods far more superior than those available to law enforcement; or using military forces “to raid or attack dwellings where terrorists were thought to be, despite risks that third parties could be killed or injured by exchanges of fire,” says a copy of the little known Sept. 21, 2001 memo.

Yoo, the author of an August 2002 legal opinion widely referred to as the “Torture Memo” that gave CIA interrogators the legal authority to use brutal methods against suspected terrorists to extract information, drafted the memo in response to a question posed by Timothy E. Flanigan, the former deputy White House counsel, who wanted to know “the legality of the use of military force to prevent or deter terrorist activity inside the United States,” according to a copy of Flanigan’s memo.

Yoo wrote that his ideas would likely be seen as violating the Fourth Amendment. But he said the terrorist attacks on 9/11 and the prospect that future attacks would require the military to be deployed inside the U.S. meant President Bush would “be justified in taking measures which in less troubled conditions could be seen as infringements of individual liberties.”

“We think that the Fourth Amendment should be no more relevant than it would be in cases of invasion or insurrection,” Yoo’s memo stated.

Yoo also wrote in the Sept. 21, 2001 memo that domestic surveillance activities, such as monitoring telephone calls and without a court’s permission, might be proper notwithstanding the ban in the Fourth Amendment on unreasonable searches and seizures.

The Sept. 21, 2001 memo Yoo sent to Flanigan was referred to in a lengthy story published in the New York Times on October 24, 2004. The Times story said Yoo’s suggestions for suspending the Fourth Amendment was hypothetical at best.

But another legal opinion Yoo, now a law professor at the University of California at Berkeley, drafted less than two years later says that the Bush administration accepted Yoo’s legal theory as policy for more than one year beginning in late October 2001.

Earlier this week, the Pentagon declassified an 81-page memorandum Yoo drafted in March 2003 that authorized military interrogators to use brutal techniques to obtain information about terrorist plans from prisoners held at Guantanamo Bay, Cuba. The memo was publicly released as part of the American Civil Liberties Freedom of Information Act lawsuit against the Pentagon.

Buried deep within that legal document is a footnote that refers to an Oct. 23, 2001 legal memorandum written by Yoo.

“Our office recently concluded that the Fourth Amendment had no application to domestic military operations,” the footnote states, referring to a 37-page document titled “Authority for Use of Military Force to Combat Terrorist Activities Within the United States.”

Yoo based his opinion on the 1990 drug case US v. Verdugo-Urquide in which the Supreme Court refused to hear a lawsuit brought against the United States by a Mexican citizen whose home was searched by federal agents without a search warrant. In rejecting the Fourth Amendment claim, the Court said aliens could not claim the benefit of the Constitution for conduct outside the United States—such aliens were not part of the “we the people” who benefited from the Fourth Amendment. Further, the Court found that allowing such claims would have significant and deleterious consequences for the United States in conducting activities beyond its boundaries, not just in drug cases… but in the use of armed forces abroad “for the protection of American citizens or national security.”

Yoo refers to the case in his 2006 book, War by Other Means: An Insider’s Account of the War on Terror, where he argues in more than 23 separate pages about the various legal reasons local and federal law enforcement agencies, as well as a sitting U.S. president, could ignore the Fourth Amendment. Yoo’s legal theories revolve primarily around domestic surveillance activities.

“If Al-Qaeda organizes missions within the United States, our surveillance simply cannot be limited to law enforcement,” Yoo wrote in his book. “The Fourth Amendment’s warrant requirement should not apply, because it is concerned with regulating searches, not with military attacks.”

Jaffer said the Bush administration has never argued publicly that the Fourth Amendment did not apply to military operations within the U.S.

Still, Congress said it has spent a considerable amount of time trying to pry loose the memo from the Department of Justice.

On Thursday, John Conyers, the Democratic chairman of the House Judiciary Committee, wrote a letter to Attorney General Michael Mukasey saying he was rebuffed on two previous occasions—on February 12 and 20th–when he wrote the DOJ requesting the Oct. 23, 2001 memo be turned over to his committee

“Based on the title of the October 23, 2001 memorandum, and based on what has been disclosed and the contents of similar memoranda issued at roughly the same time, it is clear that a substantial portion of this memorandum provides a legal analysis and conclusions as to the nature and scope of the Presidential Commander in Chief power to accomplish specific acts within the United States,” Conyers wrote.

“The people of the United States are entitled to know the Justice Department’s interpretation of the President’s constitutional powers to wage war in the United States,” Conyers added. “There can be no actual basis in national security for keeping secret the remainder of a legal memorandum that addresses this issue of Constitutional interpretation The notion that the President can claim to operate under “secret” powers known only to the President and a select few subordinates is antithetical to the core principles of this democracy. We ask that you promptly release the October 23, 2001, memorandum.”

Jason Leopold is an investigative reporter and a two-time winner of the Project Censored award. He is the author of the National Bestseller, News Junkie, a memoir. Visit newsjunkiebook.com for a preview. Read other articles by Jason, or visit Jason’s website.

This entry was posted in RagBlog and tagged Civil Liberties, Criminal Justice, Torture. Bookmark the permalink.