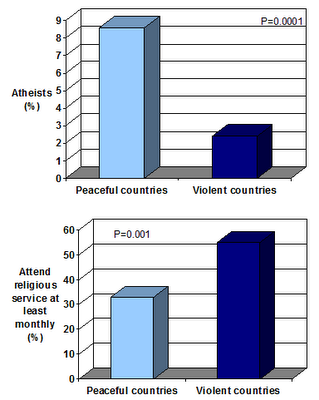 Graphic from Epiphenom.
‘It’s another blow to the idea that secularization leads to social meltdown. Atheist countries are, in fact more peaceful.’

The 2009 Global Peace Index has just been released. It’s basically a ranking of how turbulent and warlike a country is.

They put it together by assessing 23 criteria, including foreign wars, internal conflicts, respect for human rights, the number of murders, the number of people in jail, the arms trade, and degrees of democracy (Guardian).

You can see a world map of peace at the Vision of Humanity website, and also take a look at country rankings for 2009, as well as earlier years.

Then I split the sample into two equal groups, based on their score on the Global Peace Index. The ones in the ‘Peaceful’ group are countries with a GPI score less than 1.8.

Sure enough, peaceful countries have more atheists and fewer regular worshippers. The difference is highly statistically significant (P=0.001 or less) — in other words it’s real, not just a chance finding.

Now, there are several possible reasons for this. It could be that people living in turbulent countries turn to religion, or it could be that religion is not a good way to structure modern society. Or it could be that some other factor or combination of factors (democracy? free speech? education? government welfare?) generates citizens who are both peaceful and non-religious.

Whatever, it’s another blow to the idea that secularization leads to social meltdown. Atheist countries are, in fact more peaceful.

This entry was posted in RagBlog and tagged Atheism, Peace, Religion, The World. Bookmark the permalink.