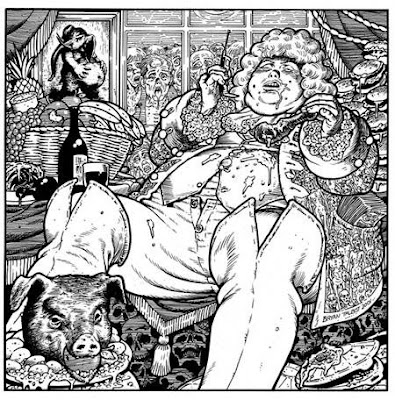 ‘This is a gun to our head by our own people. The Republicans and Democrats are both doing this.’
By Dennis Thompson / The Rag Blog / October 3, 2008

I called my congressman’s office to weigh in on the “debate”. I asked the lady taking the calls how she was holding up and she said she was above ground. I asked her if that was in relation to being alive or in a bunker?

In an op-ed piece I saw this morning, the best advice that could be recommended for a position to take in this mess was in cash and fetal. What is terror then? As the piece said, I don’t think in my lifetime I have felt this defenseless as a country and on a personal level. Not JFK assassination, not 9/11. This is a gun to our head by our own people. The Republicans and Democrats are both doing this. B. Frank et al are up to their eyeballs in the deregulation and engorgement of Freddie & Fannie scenario. Bush and family have always worked directly or indirectly for the investment bankers (Brown Harriman), what’s new. Do we really believe this just happened, somehow walking out of the dark to surprise us. If we don’t wake up now, the mountains may be where you end up, maybe as a sophist but more likely as a partisan.

This whole thing comes out of the playbook of the disaster politics scenario that Friedman liked. Screw them up bad enough and change things while they are on the ropes. Move in after a natural disaster or create an economic one, doesn’t matter. We have seen this before. Can we have a little war on this terror? And if you are worrying which side Obama is on look at this.

Good literary blog by the way.