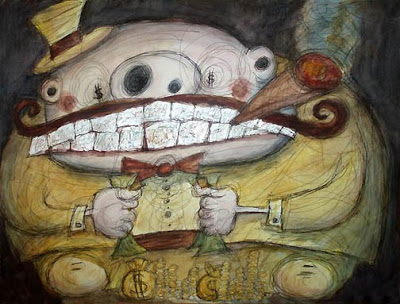 “Greed” (2006). Mixed media from natalie.org.
What they are and why they should be banned:
Naked Credit Default Swaps

Don’t let your eyes glaze over and stop reading this post because you don’t know what a “naked credit default swap” is. This is very important and I’ll try to make it easily understandable. It is important because these “naked credit default swaps” are one of the major reasons for Wall Street troubles that kicked off this recession, and if nothing is done about them, we could easily see a repeat of these problems in the near future.

First, let us examine what a “credit default swap” (CDS) is, and then what a “naked credit default swap” (NCDS) is. Say a company needs to raise some money, so they create some bonds and sell them. A second company (or individual) buys those bonds, but gets to thinking that they’d like some protection in case of the bond-seller failing to redeem the bonds. They buy an insurance policy that protects them if the bond-seller defaults on the bonds. This insurance policy is called a CDS.

Now I don’t really have a problem with CDS’s, since the buyer of the bonds should have the right to protect their investment. The problem starts with the NCDS’s. These are insurance policies on those bonds that are bought by someone who didn’t buy any of the bonds. They would not lose a single penny if the seller defaulted (failed to redeem) the bonds, because they don’t own any of the bonds.

Those who buy a NCDS are not trying to protect any investment they made (because they didn’t make any investment). They are simply making a cheap bet that the bonds will default. If the bond-seller doesn’t default, they are out a small fee, but if the default happens then they stand to make many millions of dollars. To put it bluntly, they are betting against the economy.

And this actually happened during the failure of the financial institutions on Wall Street. Many people who did not have an interest in those institutions made millions of dollars (sometimes hundreds of millions) because they had bet against the financial institutions (and our economy) by buying NCDS’s. While these people got rich over other’s misfortunes, the NCDS’s just made the whole economic situation worse for everyone else (including the people on Main Street who had no interest in Wall Street).

Let me use an analogy. If you own a house, laws prevent me from buying insurance on your house. That’s because I don’t have a legitimate interest in your house. If your house burns down, I won’t be out any money. You are the only person who will lose if your house burns down, and that is why you are the only person who can buy insurance on that house (to protect your investment). That’s just common sense. I shouldn’t have the right to get rich off your misfortune, while you just get reimbursed for your loss.

But the same rules that apply to you and me don’t apply to Wall Street. Why? That’s simple — GREED! They have fixed the rules so they make money regardless of what happens to the economy. Even worse, they make money off the misery of others without any danger of losing their own money (as would happen if they actually had to make an investment). And the Wall Street financial gurus let this happen because they get fees on the sale of these NCDS’s, which increases their own salaries and bonuses.

Why should you care about this? Because it is your tax dollars that bail out the financial and insurance giants when it all comes crashing down (just like last time). Consider this. There is currently, according to Senator Byron Dorgan (D-North Dakota), about $10 trillion (yes, I said trillion) worth of CDS’s bet on the performance of Wall Street’s giant banks, and the holdings of these banks are guaranteed by the taxpayers (just like your community bank).

The problem is that 80% of these CDS’s are NCDS’s — people betting they can get rich off the failure of these banks (or at least the failure of their bonds). And if that happens, it is the taxpayers who will get stuck with the bill. And while the taxpayer is footing the bill to make these people rich, our economy takes another nosedive — perhaps even worse than the one we are currently in. It cost us 12 million jobs this time. Can we survive the next one?

This is a problem that has a simple solution. The solution is simply to outlaw NCDS’s. Limit the “credit default swaps” to the people or companies that actually have an interest in protecting themselves from a default — that is, the buyers who would be hurt by a default. But don’t let those without a legitimate interest purchase a “naked credit default swap.” Don’t let them bet against our economy.

Sadly, the current financial reform bill being considered by the Senate does not ban the NCDS’s. Senator Dorgan has proposed an amendment that would do this, but he cannot get the Senate to even consider his amendment. He is being ignored by both Democrats and Republicans. It looks like the $1 million a day that Wall Street has sunk into lobbying is paying off for them.

The financial reform bill does contain some good things, but it doesn’t get down to the real reform that would keep the Wall Street disaster which caused our country’s economic disaster from happening again. A good start on this would be to ban NCDS’s. But at this point it doesn’t look like that will happen.

It would be nice if our senators cared as much about Main Street as they do about Wall Street, but it doesn’t look like that’s a possibility either.