I can think of very little that is more disgusting than the words of a former commander of the Guantanamo facility (which I missed when they were uttered in June 2006). He said that three detainee suicides were not acts “of desperation but an act of asymmetric warfare against us.” I come to think that there is no humanity in those who would say such things. 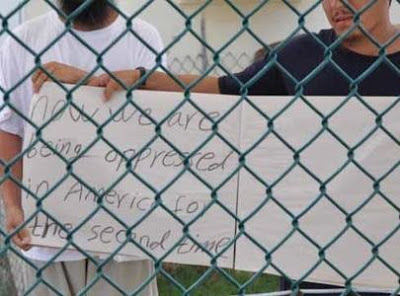 Yemeni Muhammad Ahmad Abdallah Salih, 31, is the first prisoner to die since the White House changed hands four months ago. His suicide follows weeks of criticism from both ends of the political spectrum over the fate of the remaining 240 Guantanamo detainees.

News of the suicide was emailed to the media just as a flight bringing journalists from Guantanamo landed in Maryland. The press had been at the U.S. naval detention centre for the war crimes court hearing of Canadian Omar Khadr.

Khadr, 22, is accused of war crimes, including the murder of a U.S. soldier during a firefight in Afghanistan in July 2002.

Hours after Khadr’s brief hearing Monday, fewer than a dozen journalists on the trip, including a Toronto Star reporter, witnessed a rare unscripted moment on the base when two Uighur (pronounced Wee-gur) detainees managed to hold an impromptu protest.

The group was at an Oceanside prison known as “Camp Iguana,” where 16 Uighur and one Algerian detainee are imprisoned.

As the journalists neared the fence line, the captives held up messages written in crayon on prison-issued sketch pads, knowing the Pentagon prohibits journalists from speaking to detainees.

For a few minutes they silently turned the pages quickly, as journalists shot video, photos and scribbled down their messages.

“We are being held in prison but we have been announced innocent a corrding to the virdict in caurt,” one message said. “We need to freedom (sic).”

Another stated, “America is Double Hetler in unjustice,” seemingly comparing their treatment by the U.S. government to that of the Nazis.

The Uighur prisoners with Chinese citizenship have been cleared for release but there’s nowhere for them to go since the minority group is persecuted in its Communist-controlled homeland. The U.S. government has tried for months to find a country willing to provide the group asylum.

Reporters were ushered away from the fenced-in area shortly after the Uighurs had their written protest. One of the captives yelled as the gate was locked behind the group: “Is Obama Communist or a Democrat? We have the same operation in China.”

Journalists were later forbidden from sending photos or video footage of the signs until Guantanamo officials received clearance from the White House – which didn’t come until about 14 hours later.

Pentagon ground rules signed by reporters stipulate that images of detainees must be pre-screened and cannot identify the captives due to regulations in the Geneva Conventions prohibiting the exploitation of prisoners of war.

Hours after the protest guards found Salih unresponsive in his cell in a separate area of the prison and attempts to revive him failed.

He had been held without charges at Guantanamo since February 2002 and appeared to have joined a lengthy hunger strike, according to medical records released in response to an Associated Press lawsuit.

“They have no regard for human life, neither ours nor their own,” then-Guantanamo commander Rear Adm. Harry Harris Jr. said. “I believe this was not an act of desperation but an act of asymmetric warfare against us.”

This entry was posted in RagBlog and tagged Guantanamo, Political Prisoners, Torture. Bookmark the permalink.