Guess That Makes Us Artifacts….

…Speak for yourself, Dreyer 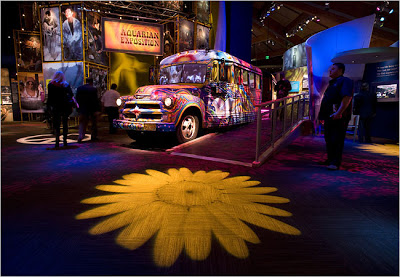 Photo by Chris Ramirez / NYT.
Back to the Garden: A Woodstock Museum
By Peter Applebome / May 29, 2008

BETHEL, N.Y. — A funny thing happened on the magic bus trip back to the tie-dyed land of peace, love and music.

Yes, there were Jimi and Janis and Joe Cocker twitching around in film clips from the famous concert 39 years ago on the rolling meadow that was Max Yasgur’s alfalfa field. There was a real-life hippie bus in psychedelic colors, and displays of a stars-and-stripes suede jacket and love beads next to a minidress and go-go boots ensemble, the latter getup presumably not worn at Woodstock.

John Sebastian and Richie Havens were there to reminisce. They played Canned Heat’s “Going Up the Country” and “The Times They Are a-Changin’” by Bob Dylan.

But somehow “then” kept looping back to “now” at the unveiling Wednesday of the Museum at Bethel Woods, which will open to the public on Monday.

So there was Duke Devlin, famous as the hippie from the Texas Panhandle who came to Woodstock and never left, standing in the bright sun giving his spiel yet again for a German television crew as they waited for two squadrons of reporters in Peter Pan buses to descend on the field where the concert took place.

Stout and tattooed, with long gray hair and beard, Mr. Devlin is the embodiment of the transition of the Woodstock generation into the AARP generation. But he figures that if Woodstock is about nostalgia, it’s about more than nostalgia, too.

“Is it over yet?” he asked. “We’re still here talking. We’ve now got this wonderful museum, but I don’t call it a museum, I call it a time capsule. And without me getting too political, a lot of the same ingredients are still the same — we’ve got a war, we have civil rights, we have women’s issues. Back then, we got sick and tired of being sick and tired. I don’t know if this can be recreated, but something like it can happen again. We’re back in the ’50s, man. The reason we’re all here is because we’re not all there.”

Which is not to say that the museum, housed in a lovely laminated wood structure built by a company that long ago built Mr. Yasgur’s silos, tries to be the personification of the Woodstock ethos, whatever that was. Centered on a 6,728-square-foot permanent gallery, it’s part of Alan Gerry’s re-creation of Woodstock not as a vehicle for peace and love but as a vehicle for Sullivan County’s economic development. The site has become a $100 million arts center with a 15,000-seat outdoor performance space.

And along with voices marveling about how much fun they had in the mud or how Woodstock changed the world, we get to hear old Nixon-era stalwarts lambasting all that Woodstock has come to stand for. “The ’60s were just a terrible time for the country,” says former Attorney General Edwin Meese III, the biggest downer in a chorus of voices, yea and nay, that museumgoers hear after a 21-minute film of music from the concert. “It was the age of selfishness. It was the age of self-indulgence. It was the age of anti-authority, an age in which people did all kind of wrong things. That was the start, really, of the drug problem in the United States.”

But yea or nay, and it’s mostly yea, the most striking thing about the museum is the way that in the end, it’s less about the famous concert and yoga in the mud than about the era that the concert has come to represent.

“When I came to this project, there was this idea to memorialize the concert, which was about as far as it had gone,” said Patrick Gallagher, president of the firm that designed the museum. “And I said, ‘If it’s just a celebration of a celebration, what’s the purpose?’ And the more we peeled back the onion the more it was clear that the idea wanted to be Woodstock as the culminating moment, the capstone of the 1960s. We had to look back to look forward.”

So about 60 percent of the museum is about the politics and culture and music of the ’60s: pillbox hats, Elvis, the Bay of Pigs, the Beatles, civil rights, the assassinations of John and Robert Kennedy and Martin Luther King Jr., and Neil Armstrong walking on the moon. And the rest is a quite vivid re-creation of the chaotic and unlikely process that led to 500,000 people shouting, “No rain, no rain, no rain,” during the summer downpours, Jimi Hendrix’s legendary performance of “The Star-Spangled Banner,” and all the rest. 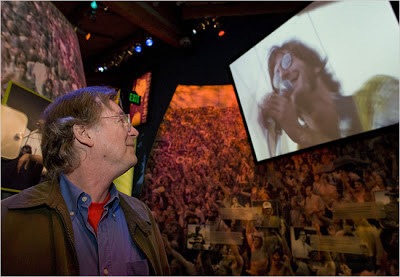 John Sebastian watches his 1969 self sing “Darling Be Home Soon.”Photo by Chris Ramirez / NYT.
As for the music, Mr. Sebastian said that in the end, some was revelatory and a lot was something of a mess. “No matter what we say after the fact, most of us disliked our performances at Woodstock,” he said. “I can find you a quick dozen people who would look back on that performance and say, ‘Oh, man, I bit the big one.’ ” But as for the event, he said, he went home knowing that he had been a part of history.

He wonders why, if people love Woodstock so much, they don’t find ways to act on the things about it that matter. “It evaporated so fast,” he said. “One minute we were there and the next we were in Reagan-land.”

Still, he said, as one of the voices in the exhibit: “I guess it did give you the illusion of infinite possibilities. And maybe that’s the part that we have to say bye-bye to. Because that can’t be for your whole life or for every moment in history that you might happen to live through.”

As for saying bye-bye to Woodstock, not a chance. The museum opens a year before the 40th anniversary, probably the last big milestone at which most of the musicians will be able to perform without walkers. They’re just beginning to draw up plans, but Mr. Meese notwithstanding, don’t expect it to come and go quietly.

This entry was posted in RagBlog and tagged Counterculture, History, Music, Psychedelia, Sixties. Bookmark the permalink.