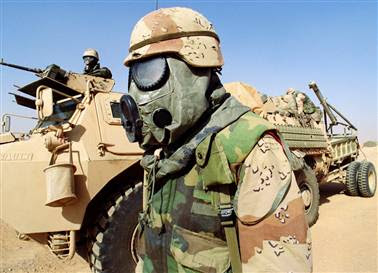 WASHINGTON — At least one in four U.S. veterans of the 1991 Gulf War suffers from a multisymptom illness caused by exposure to toxic chemicals during the conflict, says a congressionally mandated report that is being released today.

For most of the past 17 years, government officials said that the health problems of the veterans — more than 175,000 out of about 697,000 deployed — were the effects of wartime stress, even as more people have come forward with severe ailments.

“The extensive body of scientific research now available consistently indicates that ‘Gulf War illness’ is real, that it is the result of neurotoxic exposures during Gulf War deployment, and that few veterans have recovered or substantially improved with time,” says the report from a panel of scientists and veterans. A copy was obtained by Cox Newspapers.

The panel said in a 2004 draft report that many of the veterans were suffering from neurological damage and pointed to toxic chemicals as a possible cause. The new report goes further by pinpointing known causes, and it criticizes past U.S. studies, which have cost more than $340 million, as “overly simplistic and compartmentalized.”

The panel is urging Congress to spend at least $60 million annually on research. It notes that no effective treatments have been found.

Two things that the military provided to troops in large quantities to protect them in combat — pesticides and pyridostigmine bromide tablets, aimed at thwarting the effects of nerve gas — are the most likely culprits, the panel found.

Gulf War illness is typically characterized by a combination of memory and concentration problems, persistent headaches, unexplained fatigue and widespread pain. It may also include chronic digestive problems, respiratory symptoms and rashes.

The Research Advisory Committee on Gulf War Veterans’ Illnesses, created by Congress in 1998 , will present the 450-page report to Secretary of Veterans Affairs James Peake. The panel said its report is the first to review the hundreds of U.S. and international studies on Gulf War veterans conducted since the mid-1990s.

It recommends that the Department of Veterans Affairs order a redo of past Gulf War health reports, calling them “skewed” because they did not include evaluations of toxic exposure studies in laboratory animals, as Congress had requested. The panel examined such tests and notes that recent ones have identified biological effects from Gulf War exposures that were previously unknown.

Although the report calls some new VA and Defense Department programs promising, it notes that overall federal funding for Gulf War research has dropped sharply in recent years. The studies that have been funded, it says, “have little or no relevance to the health of Gulf War veterans.”

The report also faults the Pentagon, saying that it clearly recognized scientific evidence substantiating Gulf War illness in 2001 but did not acknowledge it publicly.

The panel focused its research on comparing the brains and nervous systems of healthy adults with those of sick Gulf War veterans, as well as analyzing changes to the neuroendocrine and immune systems. It found that in terms of brain function, exposure to pesticides and the pyridostigmine bromide pills is damaging to memory, attention and mood. Some people, it notes, are genetically more susceptible to exposure than others.

About half of Gulf War personnel are thought to have taken the tablets during deployment, with the greatest use among ground troops and those in forward positions. Many veterans say they were forced to take the pills, which had not been approved by the U.S. Food and Drug Administration. Some say they fell ill immediately.

“Many of us got sick from the pills,” said retired Staff Sgt. Anthony Hardie, a Wisconsin native who was with a multinational unit that crossed from Saudi Arabia into Kuwait and then Iraq. He said he was required to take them for several weeks and soon had watery eyes and vision problems, diarrhea, muscle twitching and a runny nose. A fellow special operations forces officer, he said, lost about 20 pounds.

To ward off sand flies in Kuwait City and the eastern Saudi province of Dhahran, Hardie said, trucks would come through at 3 a.m. and spray “clouds” of pesticides.

“The pesticide use was far and away (more) than what you’d see in daily life,” he said.

Several soldiers who were interviewed said they were ordered to dunk their uniforms in the pesticide DEET and to spray pesticide on exposed skin and in their boots to ward off scorpions.

The federal panel also said it could not rule out an association between Gulf War illness and the prolonged exposure to oil fires, as well as low-level exposures to nerve agents, injections of many vaccines and combinations of neurotoxic exposures.

Retired Sgt. Randy Stamm of Mesquite was among the 100,000 U.S. troops who may have been exposed to low levels of sarin gas as a result of large-scale U.S. demolitions of Iraqi munitions near Khamisiyah in 1991. Troops who were downwind from the demolitions have died from brain cancer at twice the rate of other Gulf War veterans, the report says.

His unit was nearby during the demolitions and near the burning oil fires for 31\/2 months. He said he took the pyridostigmine bromide pills for more than a month.

Stamm now takes 63 pills a day to treat health problems that include gastritis and esophagitis.

“My intestinal system is hosed,” he said, adding that he is losing vision in his right eye. “I lost eight wives because of this.”

White said that although there is a lot of anecdotal evidence of Gulf War veterans contracting multiple sclerosis, studies haven’t confirmed a combat link to that degenerative disease. Questions also remain about rates of cancers, disease-specific mortality rates in veterans and the health of their children.

That veterans’ complaints are still repeatedly met with cynicism, White said, “upsets me as a scientist, as someone who cares about veterans.”