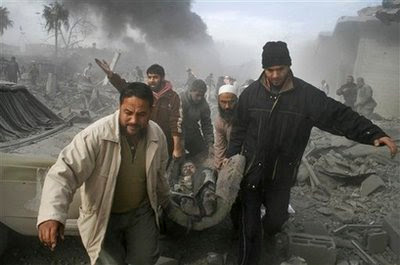 A Hamas official insists that a ‘legacy of suffering’ under Israel is what fuels Palestinian resistance.

From Damascus — While Americans may believe that the current violence in Gaza began Dec. 27, in fact Palestinians have been dying from bombardments for many weeks. On Nov. 4, when the Israeli-Palestinian truce was still in effect but global attention was turned to the U.S. elections, Israel launched a “preemptive” airstrike on Gaza, alleging intelligence about an imminent operation to capture Israeli soldiers; more assaults took place throughout the month.

The truce thus shattered, any incentive by Palestinian leaders to enforce the moratorium on rocket fire was gone. Any extension of the agreement or improvement of its implementation at that point would have required Israel to engage Hamas, to agree to additional trust-building measures and negotiation with our movement — a political impossibility for Israel, with its own elections only weeks away.

Not that the truce had been easy on Palestinians. In the six-month period preceding this week’s bombardment, one Israeli was killed, while dozens of Palestinians lost their lives to Israeli military and police actions, and numerous others died for want of medical care.

The war on Gaza should not be mistaken for an Israeli triumph. Rather, Israel’s failure to make the truce work, and its inevitable resort to bloodshed, demonstrate again that it cannot permit a future built on Palestinian political self-determination. The truce failed because Israel will not open Gaza’s borders, because Israel would rather be a jailer than a neighbor, and because its intransigent leadership forestalls Palestinian destiny and will not make peace with history.

This week’s war is not an attack on the Izzidin al-Qassam units — our movement’s military wing — but is simply aggression targeting the people, infrastructure and economic life of Gaza, designed to sow terror and loose anarchy; it aims to establish new “facts on the ground” — that is, heaps of rubble with bodies trapped beneath — in advance of the coming American administration.

Israel claims loudly that it had no other choice this week but to rain death on refugees in camps, killing dozens of women and children, while Defense Minister Ehud Barak (the once and would-be prime minister) — his eye fixed on February elections — employs mass murder as his party’s latest vote-getting appeal, an electoral strategy fit to shame the most hardened Chicago political operative.

But, of course, options remained available. Israel might have relented months ago, for the sake of the truce, in its criminal determination to starve Gaza, cutting off much of its fuel and choking all commerce to a trickle, blocking relief organizations from delivering food and medicine, and consigning Gaza’s citizens to famine rations. Only the most cynical observer would call this grinding attrition “good faith” adherence to the truce. Blockades, after all, are explicitly acts of war.

Palestinians everywhere mark the closing of the Bush era with relief; nevertheless, skepticism runs high that any justice for our people might come from a new president who remained ominously silent in the presence of the latest Israeli onslaught, and who has aligned himself so thoroughly with Israel’s interests, so long in advance of taking power. Barack Obama’s helicopter ride two years ago above the Holy Land was not unusual in the annals of American parliamentarians junketed on “fact finding” trips by Israel’s lobbyists; yet his fond remarks on what he saw — “houses and streets like ones you might find” in any American suburb — were notable for their silence as to any troubling sights. Did he miss the security roads and checkpoints that riddle the West Bank, or the construction of the wall, or the illegal settlements? Perhaps his helicopter flew too high.

But now, amid Israel’s latest attack on our people, as the death toll rises in the hundreds, with thousands wounded — all victims of American taxpayers’ largesse — Palestinians wonder how Obama will react to the escalating crisis. They demand of the next White House a new paradigm of respect and accountability, because when Palestinians see an F-16 with the Star of David painted on its tail, they see America.

Palestinians are understandably guarded about the coming administration, noting its appointments with trepidation. The soon-to-be secretary of State is unforgettable for urging years ago U.S. recognition of Jerusalem as Israel’s “undivided” capital, while the administration’s chief of staff bears the stain of his father’s service in the banned terrorist Irgun paramilitary, a Zionist group responsible for numerous atrocities.

Renewed calls today for our movement to “recognize the right of Israel to exist,” in the face of murderous onslaught, ring as hollow as Israel’s continuing claims to be acting in “self-defense” as her jets bomb civilians. Without debating here the Zionist state’s fictive, existential “right,” which of the many Israels, precisely, would the West have us recognize? Is it the Israel that militarily occupies land belonging to three of its neighbors, ignoring international law and scores of U.N. resolutions over decades? Is it the Israel that illegally settles its citizens on other people’s land, seizes water sources and uproots olive trees? Is it the Israel that in 60 years has never acknowledged the forced expulsion of Palestinians from their farms and villages as the foundational act of its statehood and denies refugees their right to return?

Through bitter experience, when we hear demands for “recognition” of Israel as a precondition to dialogue, what we hear is a call for acquiescence in its crimes against us, validating the injustices that have been wrought in its name.

Our spirit to fight on is the legacy of collective suffering: With tens of thousands dead or wounded by decades of the “peace process,” you cannot find a family in Palestine — Muslim or Christian, Hamas, Fatah, PFLP or Islamic Jihad — without a son or daughter killed, injured, jailed or tortured, or which does not count itself or its kin among the millions of refugees living in U.N. camps.

Hamas is not a handful of leaders. Israel may kill all of the current leadership in this round of violence, including me, and its organic, social infrastructure will not go away. We are, simply put, a homegrown national liberation resistance movement, with millions of people who support our struggle for freedom and justice.

President-elect Obama spoke courageously in his campaign for a policy of open dialogue, absent preconditions, with those deemed inimical to U.S. interests, and we were listening. One former U.S. president — a true peacemaker — has dared to visit with us and hear our side of this struggle, while offering us no shortage of criticism. It has been a refreshing exchange. Now is the time for the next U.S. president to do the same.

No American leader has ever visited a Palestinian refugee camp anywhere, much less in Gaza — a startling fact, considering the central role America has played in our people’s narrative. None has dared to look our refugees in their faces and experience their suffering directly.

In observance of the storied tradition of Arab hospitality to guests, and anticipating that day when an American president fulfills his promise of change, we extend the invitation now, and we will put the kettle on.

[Mousa Abu Marzook is the deputy of the political bureau of Hamas, the Islamic Resistance Movement.]