Harry Targ :
Break up the banks and the military/industrial complex!

What Hillary Clinton calls ‘American leadership’ is more about militarism than statesmanship. 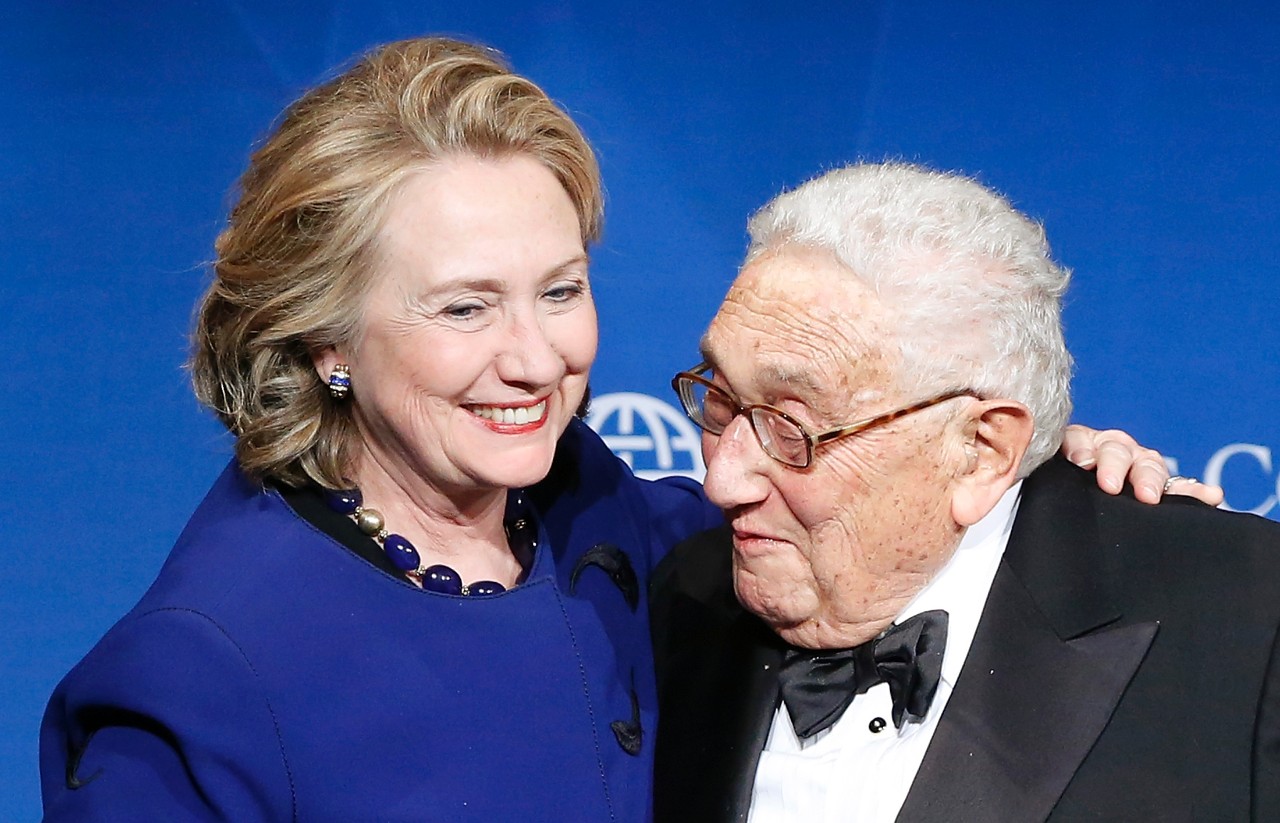 Hillary Clinton recently declared that she was the only candidate who had the knowledge and experience to preserve the national security of the United States. However, Senator and Secretary of State Clinton voted for Iraq war authorization, advocated war on Libya, warned against significantly improving relations with Iran, and recommended establishing a so-called “no-fly zone” in Syria.

She initiated and supported the “Asian Pivot,” developing a greater political, economic, and military presence in Asia. In addition, during her term as Secretary of State, Clinton defended the overthrow of the elected president of Honduras, Manuel Zelaya, in 2009, and challenged other Latin American leaders to support a new election that would give legitimacy to his ouster.

In a 2014 review of Henry Kissinger’s latest book, World Order, Clinton mused about the many problems the world faced, including Russia’s presence in Ukraine, extremism in Syria and Iraq, and “escalating tensions in the East and South China Seas.” She said that while she occasionally differed with his policies, she believed that former Secretary of State Kissinger played a significant role in making the world a better place. According to her, during the Cold War there existed a bipartisan commitment to promote freedom, market economies, and cooperation among nations. And, she declared, it worked.

This system, advanced by U.S. military and diplomatic power and our alliances with like-minded nations, helped us defeat fascism and communism and brought enormous benefits to Americans and billions of others. Nonetheless, many people around the world today — especially millions of young people — don’t know these success stories, so it becomes our responsibility to show as well as tell what American leadership looks like.” (“Hillary Clinton Reviews Henry Kissinger’s ‘World Order,’” The Washington Post, September 4, 2014).

In the review, Hillary Clinton elaborated on the U.S. commitment to human rights and democratic values, declaring that the U.S stood for more than just military power and political influence around the world. Indeed, she wrote, “…the United States is uniquely positioned to lead in the 21st century” to help build “…a future in which the forces of freedom and cooperation prevail over those of division, dictatorship and destruction.”

Secretaries Kissinger and Clinton did not initiate the American hegemonic economic and military institutions that have dominated the world since World War II but they have participated in their perpetuation. Data on military adventures, casualties, and deaths, and the magnitude of expenditures for war and subversion, suggest a different United States role in the world than the one Clinton wrote about in her book review and has spoken of in her more recent campaign for the presidency.

Between WWII and 2008, the United States participated in 390 military interventions involving 20 million deaths.

Marc Pilisuk and Jennifer Achord Rountree, report in their new book, The Hidden Structure of Violence: Who Benefits from Global Violence and War (Monthly Review, 2015), that between the Second World War and 2008, the United States participated in 390 military interventions involving 20 million deaths. In 2014, the United States had military personnel in 130 countries and over 900 overseas bases. In the first decade of the 21st century the United States spent over seven trillion dollars on the military.

The Council on Foreign Relations recently issued a report by resident scholar Micah Zenko indicating that the United States in 2015 dropped 23,144 bombs on Iraq, Syria, Afghanistan, Pakistan, Yemen, and Somalia. The largest number of bombs were dropped over Iraq and Syria (22,110), followed by Afghanistan (947), and Yemen (58). Ironically, Defense Department reports indicated that only six civilians died in all this bombing.

Adam Johnson (“U.S. Dropped 23,144 Bombs on Muslim-Majority Countries in 2015,” Alternet, January 8, 2016) points out that despite the bombing of Afghanistan, the Taliban control more territory in that country today than at any time since the war started in 2001. The spread of ISIS across the Middle East and North Africa also has occurred during the period of escalated U.S. bombing.

There are other indicators to suggest that the instrumentalities of what Secretary Clinton calls “American leadership” are more about militarism than statesmanship and humanitarianism. David Isenberg (“Private Military Contractors and U.S. Grand Strategy,” PRIO, Oslo, 2009) refers to “…the U.S. government’s huge and growing reliance on private contractors [which] constitutes an attempt to circumvent or evade public skepticism about the United States’ self-appointed role as global policemen.”

Washington Post investigators compiled a data base, “Top Secret America,” that found 1,931 intelligence contracting firms doing top secret work for 1,271 government organizations at over 10,000 sites. TSA indicates that 90 percent of the intelligence work is done by 110 contractors. Defense Department spokespersons and legislators claimed that the United States needs to continue allocating billions of dollars to private contractors to maintain military performance levels that are minimally acceptable.

Nick Turse (The Complex: How the Military Invades Our Everyday Lives) described the introduction of unmanned aerial weapons in the 1990s and their current weaponry of choice for the White House and others who prefer antiseptic and bloodless (on the U.S. side) technologies to eliminate enemies. New predator drones can be programmed to fly over distant lands and target enemies for air strikes. Drones have been increasingly popular as weapons in fighting enemies in Afghanistan, Pakistan, Somalia, and Yemen.

In roughly a dozen countries — from the deserts of North Africa, to the mountains of Pakistan, to former Soviet republics crippled by ethnic and religious strife — the United States has significantly increased military and intelligence operations, pursuing the enemy using robotic drones and commando teams, paying contractors to spy and training local operatives to chase terrorists.

The United States has initiated campaigns to identify and assassinate presumed enemies. CIA operatives and private contractors join teams of army specialists under the Joint Special Operations Command (13,000 assassination commandos around the world) to kill foreigners alleged to be affiliated with terrorist groups. These targets also can include U.S. citizens living abroad who have been defined as terrorist collaborators. In the Western Hemisphere, the United States, through Latin American military personnel trained at the School of the Americas, has long supported assassination programs that now seem to be “globalized,” that is, administered everywhere.

A careful reading of the United States global military presence suggests the enormity of its violence which explains the growing resistance to the American presence from the Middle East and Persian Gulf to Asia and African to Latin America. Contrary to the pontification of Secretaries of State Kissinger and Clinton, the U.S. role in the world has been an imperial one. And along with the pursuit of power and resources, global militarization is intimately connected to what President Eisenhower called the Military/Industrial Complex.

Over one-half of federal government expenditures are for military operations.

Over one-half of federal government expenditures each year are for current or past military operations. And as Seymour Melman demonstrated years ago in Pentagon Capitalism and Nick Turse has found in recent years, military contracts permeate the investments in virtually every large United States corporation. Therefore global violence becomes the rationale for bloated military expenditures.

“While few politicians are willing to admit it, we don’t just endure wars we seem to need war — at least for some people. A study showed that roughly 75 percent of the fallen in these wars come from working class families. They do not need war. They pay the cost of the war. Eisenhower would likely be appalled by the size of the industrial and governmental workforce committed to war or counter-terrorism activities. Military and homeland budgets now support millions of people in an otherwise declining economy. Hundreds of billions of dollars flow each year from the public coffers to agencies and contractors who have an incentive to keep the country on a war-footing-and footing the bill for war.” (Jonathan Turley, “Big Money Behind War: The Military-Industrial Complex,” Aljazeera, January 11, 2014).

As the political rhetoric escalates during the 2016 election season, a comprehensive debate on the role of the United States in the world is necessary. This requires a structural critique of United States foreign policy just as radical as has been raised about domestic policy. A discussion that appropriately condemns the inordinate wealth and power of finance capital at the expense of the health and well-being of the many should also condemn the combination of corporations, banks, and military institutions which rob from people at home and kill and maim people overseas.