Harry Targ : From the Bay of Pigs to the Missile Crisis / 3 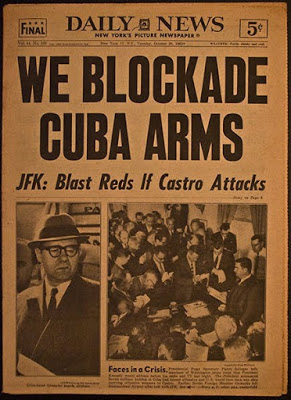 Front page of New York Daily News, October 23, 1962. From the Mitchell Archives.
The Cuba story, Part 3:
The Bay of Pigs to the missile crisis

The Cuban missile crisis suggests that the United States would go to any extreme, even nuclear war, to defend the interests of capitalism.

“In the missile crisis the Kennedys played their dangerous game skillfully… But all their skill would have been to no avail if in the end Khrushchev had preferred his prestige, as they preferred theirs, to the danger of a world war. In this respect we are all indebted to Khrushchev.” (I.F. Stone,“What If Khrushchev Hadn’t Backed Down?” in In a Time of Torment, Vintage, 1967)

The Kennedy Administration goes to the brink of nuclear war

The period between the failed Bay of Pigs invasion, the announcement of the Alliance for Progress economic assistance program, and the Cuban Missile Crisis was one of escalating hostilities. Fidel Castro declared Cuba a Socialist state. The United States pressured members of the Organization of American States (OAS) to expel Cuba.

The CIA began campaigns to assassinate the Cuban leader and President Kennedy initiated the complete economic blockade that exists until today. In addition, Castro warned that the U.S. was continuing to plan for another invasion. The Soviet Union began providing more economic and military support to the Cubans, including anti-aircraft missiles and jet aircraft.

In October 1962, U.S. spy planes sighted the construction of Soviet surface-to-air missile installations and the presence of Soviet medium-range bombers on Cuban soil. These sightings were made after Republican leaders had begun to attack Kennedy for allowing a Soviet military presence on the island. Kennedy had warned the Soviets in September not to install “offensive” military capabilities in Cuba. Photos indicated that the Soviets had also begun to build ground-to-ground missile installations on the island, which Kennedy defined as “offensive” and a threat to national security.

After securing the photographs Kennedy assembled a special team of advisors, known as EXCOM, to discuss various responses the United States might make. He excluded any strategy that prioritized taking the issue to the United Nations for resolution.

After much deliberation EXCOM focused on two policy responses: a strategic air strike against Soviet targets in Cuba or a blockade of incoming Soviet ships coupled with threats of further action if the Soviet missiles were not withdrawn. Both options had a high probability of escalating to nuclear war if the Soviet Union refused to back down.

High drama, much of it televised, followed the initiation of a naval blockade of Soviet ships heading across the Atlantic to Cuba. Fortunately, the leader of the Soviet Union, Nikita Khrushchev, sent notes to the President that led to a tacit agreement between the two leaders whereby Soviet missiles would be withdrawn from Cuba and the United States would promise not to invade Cuba to overthrow the Castro government. In addition, the President indicated that obsolete U.S. missiles in Turkey would be disassembled over time.

Most scholars argue that the missile crisis constituted Kennedy’s finest hour as statesman and diplomat. They agree with the administration view that the missiles constituted a threat to U.S. security, despite Secretary of Defense Robert McNamara’s claim in EXCOM meetings that the missiles did not change the strategic balance between the United States and the Soviet Union. Most of these scholars have agreed that the symbolic value of the installation of Soviet missiles could have had grave consequences for U.S. “credibility.”

Given the importance of the missiles, leading social scientists have written that the Kennedy team carefully considered a multitude of policy responses. EXCOM did not ignore competing analyses, as had been done in the decisional process prior to the Bay of Pigs. The blockade policy that was adopted, experts believe, constituted a rational application of force that it was hoped would lead to de-escalation of tensions. All observers agreed that the United States and the Soviet Union had gone to the brink of nuclear war. Even the President estimated that there was a 50 percent probability of full-scale nuclear war.

In the end the Soviets withdrew their missiles. Analysts said the Soviet Union suffered a propaganda defeat for putting the missiles on Cuban soil in the first place and then withdrawing them after U.S. threats. Khrushchev was criticized by the Chinese government and within a year he was ousted from leadership in the Soviet Union.

In the light of this U.S. “victory,” Kennedy has been defined as courageous and rational. The real meaning of the Cuban Missile Crisis, however, is different, even 50 years after the event. The crisis actually suggests that the United States quest to maintain and enhance its empire would lead it to go to any extreme, even nuclear war, to defend the interests of capitalism. To avoid serious losses, whether symbolic or material, for capitalism, any policy was justified.

Further, in terms of U.S. politics, Kennedy was calculating the effects of the missiles on the chances for his party to retain control of Congress in 1962. A second “defeat” over Cuba (the Bay of Pigs was the first) would have heightened the opposition’s criticisms of his foreign policy.

Finally, in personal terms, Kennedy was driven by the need to establish a public image as courageous and powerful in confronting the Soviets. Khrushchev had spoken harshly to him at a summit meeting in Vienna in 1961 and Castro had been victorious at the Bay of Pigs. The President’s own “credibility” had been damaged and a show of force in October 1962, was necessary for his career.

Because of imperialism, politics, and personal political fortunes, the world almost went to nuclear war 50 years ago. As I.F. Stone suggested shortly after the crisis, nuclear war was avoided because the Soviet Union chose to withdraw from the tense conflict rather than to engage in it further.

National Security Archives files referred to in an earlier blog suggest, “the historical record shows that the decisions leading to the crisis which almost brought nuclear war have been repeated over and over again since the early 1960s.” The danger of the unabashed and irresponsible use of force and the legitimation of the idea that diplomacy can be conducted using nuclear weapons and other devastating weapons systems still represents a threat to human survival.

This is the third of three articles that address U.S./Cuban relations that culminated in a crisis over Cuba that almost led to nuclear war. These essays are adapted from my book, Strategy of an Empire in Decline: Cold War II, 1986.