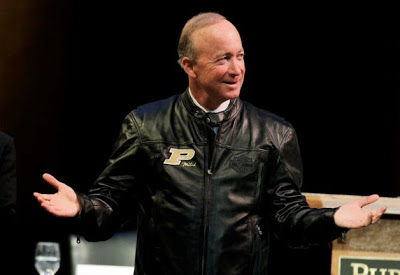 Daniels has no administrative experience in higher education except appointing the Trustees who in secret carried out a presidential search that led to his appointment.

Big banks, multinational corporations, political parties, and upcoming elections dominate our public discourse as they should. But there is a danger that the fabric of social institutions is being transformed before our eyes but yet beyond our consciousness. Such is the case of the radical changes occurring in education, from kindergarten through college.

Calls for free, open, accessible, and transparent education have been a tradition almost as long as the rhetorical commitment to democracy itself. In fact most people believe that education, democracy, and the economy are inextricably connected. However, the education/democracy connection has been weakening ever since the 1960s.

After World War II, the GI Bill began providing educational opportunities for returning veterans. They were to become the trained work force and expanding consumers for a booming economy. However, the expansion of higher education was coupled with a campaign to purge dangerous and subversive professors and curricula from the university. Access to higher education spread while the range of ideas studied narrowed.

In the 1960s, student activists, now enrolled in thousands of small and large colleges and universities, rebelled against the narrowing focus of knowledge. The university as the site for training to advance capitalism and technical skills, what Clark Kerr, former president of the University of California, called “the multiversity,” was challenged; for a time successfully. Academic programs that did not fit traditional classical studies or new scientific/technical fields were allowed to flower and grow.

The so-called Reagan revolution brought a shift in economic policy downsizing the growth in the welfare state, government spending for social safety nets, and support for public institutions such as education. In addition, the new ideology preached privatization, shifting public sector spending for the provision of services to the marketplace.

By the 1990s, both political parties endorsed public policies that decreased support for the many to further economic rewards for the few. Tax breaks for the rich, cuts in welfare protections, declining support for public education, public libraries, transportation, and housing continued the shift in wealth from the working class to the economic ruling class.

Right-wing radio host Rush Limbaugh once remarked that the economic and political transformation of U.S. society was near complete. The only institution which the right-wing did not control was the university. By the 1990s powerful groups began to remake the university too.

Since the dawn of the new century higher education budgets have been slashed. College tuitions are skyrocketing, class size is increasing, and many of the programs designed to develop new ways of thinking about the world (particularly in the social sciences and humanities) are being cut.

State universities originally created to educate small farmers and workers in order to advance their economic status have become low-cost research arms of huge corporations such as Eli Lilly in pharmaceuticals and Monsanto in the agricultural sector (both are huge worldwide corporations). In the 21st century universities have not shrunk. More and more top heavy administrations and human relations departments control the main activities that used to be determined by faculty.

The process of selecting university presidents reflects the qualitative changes occurring in higher education. At the University of Virginia, President Teresa Sullivan was ousted recently in a secret coup engineered by the “Board of Visitors,” a 17-person body that controls major policy decisions at that university.

Of the 17, only four members had any higher education experience, but the body in total contributed over $800,000 to candidates for state office; $680,000 to Republicans and $150,000 to Democrats. The governor appoints this body. And in the case of ousted President Sullivan, it objected to her consultation with deans and faculty before making decisions about shifting budgets. Unusual in this day and age, 2,000 students and faculty recently rallied on campus to demand her reinstatement.

In Indiana the Purdue University Board of Trustees (10 of 12 selected by sitting Governor Mitch Daniels) announced that it was appointing Daniels to be Purdue University’s twelfth president. Daniels will be completing his second term as governor and will take office as Purdue’s president in January, 2013.

Daniels has been a visible politician over the last decade in several arenas. These include a stint as President Bush’s Budget Director from 2001 to 2004 when taxes were lowered, two wars were launched, and the seeds were planted for the current economic crisis. Daniels was elected Indiana’s governor in 2004. In his first day in office he eliminated the prior governor’s order that allowed public sector workers to unionize.

Subsequently, he led Hoosier right-wing politicians in supporting charter schools with public money, cutting education spending at all levels by $150 million (including a $30 million cut in higher education), sold off some of Indiana’s highway system to European investors, shifted family services to an ill-equipped private corporation, and cut funding for reproductive health services. He worked to pass a so-called Right-to-Work bill after telling union supporters that he would never do that.

In addition, Daniels served as an executive at Eli Lilly, and CEO at the conservative think tank, the Hudson Institute, and was affiliated with an online university, Western Governors University, that could potentially compete with state colleges and universities. Most important Daniels has no administrative experience in higher education except appointing the Board of Trustees members who in secret carried out a presidential search that led to his appointment.

The political corruption and dubious merit of the selection of Daniels as Purdue president are obvious. What is less obvious is that this appointment like the appointment of many other university presidents and the firing of Virginia President Theresa Sullivan, is part of the shift in higher education from a model of the university as a site for research and teaching about ideas and as an institution that serves the needs of the society at large to a corporate model.

The GI Bill educated a whole generation of veterans to lift themselves and society. The expansion of the meaning of the university as a result of student protest and the civil rights movements of the 1960s brought new ideas to a larger number of young people.

Educator Henry Giroux put it well: “Knowledge has become capital to invest in the market but has little to do with the power of self-definition, civic commitments, or ethical responsibilities… and with questions of justice.”

In the end, this is the most troubling aspect of the transformation of the modern university which the appointment of presidents like Governor Daniels signifies.