Harry Targ :
On democracy: ‘Can we talk?’

The United States’ political system, we are told repeatedly, is the gold standard for the world. 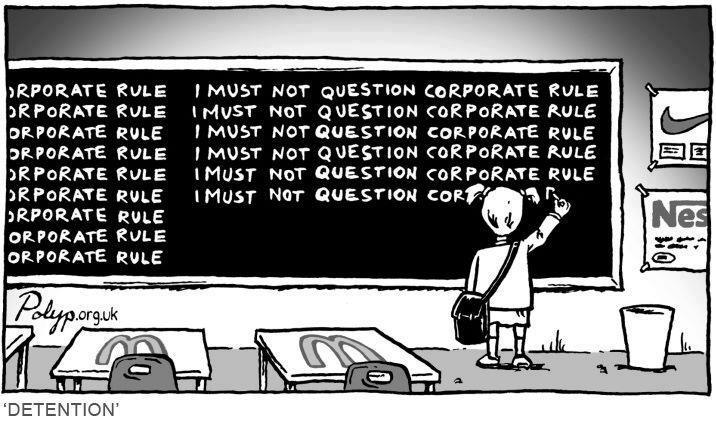 Image from Philosophers for Change.

Through her decades of entertaining on stage and screen, [Joan] Rivers developed numerous classic bits and catchphrases, but three small words stand above the rest: “Can we talk?” (Kelli Bender @kbendernyc, 09/04/2014, also at People.com)

I never liked comedienne Joan Rivers who died recently. But her famous one-line introduction to talk show interviewers and stand-up performances is a powerful reminder that certain subjects might be dangerous to discuss in polite company. Whether the United States’ political system is a democratic one is such a subject.

Distinguished data source Freedom House claims that freedom can only exist in democratic political systems. Democratic systems are those in which governments are accountable, the rule of law exists, and associations and speech are guaranteed to all. Polity IV, another data-based source of information about governments, has a more refined definition of democracy: there are procedures by which citizens can express their preferences about leaders and policies and there exist both constraints on executive power and guarantees of civil liberties.

University of Iowa Political Science Professor William M. Reisinger prepared a chart summarizing the key components of democracy reflected in the writings of political philosophers (such as Aristotle), politicians (John C. Calhoun), skeptics (H. L. Mencken), and a variety of contemporary political scientists. He appends to his chart 25 quotations that illustrate variations in the understanding of the concept “democracy.”

Reisinger identifies five emphases in most writings on the subject.

“1) it is a dangerous form of government; 2) it includes genuine competition for power; 3) it permits mass participation on a legally equal footing; 4) it provides civil and other liberties that restrict the sphere of state power within the society; or 5) it promotes widespread deliberation about how to make and enforce policy so as to promote the common good.” (William M. Reisinger, “Selected Definitions of Democracy,” uiowa.edu)

The United States does not meet broadly endorsed criteria for a democracy.

Reflecting on these five elements of democracy might lead to a more sober understanding of the United States’ political system than what most people learned in school (from kindergarten through graduate programs in political science). Particularly, looking at Reisinger’s last four features might suggest that the United States does not meet broadly endorsed criteria for a democracy.

Does the political system afford “genuine competition for power?” The answer is no for a variety of reasons. Campaigns for office from local through federal positions require enormous amounts of money. Supreme Court decisions have enshrined the right of the wealthy (often the one percent) to pour unlimited financial resources into elections. Koch Brothers affiliates have even invested in local school board elections to influence school curricula and give support to the privatization of education.

Funding of elections is reinforced by rules and regulations limiting political participation to two parties. Also states, from Indiana, Wisconsin and Michigan to the South and Southwest, have imposed rulings making it harder for citizens to vote. Some voter suppression laws, sometimes overturned by courts because of their egregious violation of constitutional principles, have survived serious challenges (such as the Supreme Court decision to allow the Texas disenfranchisement of an estimated 600,000 minority voters) at least for the next election.

In the end money, institutionalized procedures, state laws, and judicial decisions have undermined the possibility of competition for political power.

Everything that has been said above limits equal and mass participation in politics. Money, power, institutions, and media propaganda conspire to limit political participation and the entire weight of the political system works to impair workers, minorities, young people, and the elderly.

In the 1970s, Political Scientist Samuel Huntington wrote a paper for the then influential foreign policy organization, The Trilateral Commission, warning of the “danger of democracy.” The danger he identified all across the globe was the “excess of democracy.” In other words, in the 1970s, (and one would only surmise the condition is worse today) too much participation in politics would challenge the status quo and stability.

Reisinger pointed out that some definitions of democratic states (on his chart six of 25 entries) highlight “civil and other liberties that restrict the sphere of state power within the society.” There is much anecdotal evidence to suggest that local police have garnered vastly increased power to arrest, charge, kill, and incarcerate more citizens on a per capital basis than most countries in the world. The most overrepresented targets of the expanding police state are young, African/American males but the class character of the criminal justice system has been prevalent as well.

In addition federal government surveillance, criminal conduct by the National Security Agency, and long-standing practices of the Federal Bureau of Investigation to undermine and crush dissent have been significant features of the historical landscape.

Fewer than 10 media conglomerates control most of the information consumed
by the citizenry.

Finally, Reisinger has found some references in discussions of democracy to “deliberation” on public policy to “promote the common good.” Fewer than 10 media conglomerates control most of the information consumed by the citizenry and think tanks generating “expert” analyses are bought and paid for by corporations, government agencies, billionaires, and political parties.

Two recent stories have been ignored in the mainstream media. First, the German government has decided to provide free college education to all its citizens (thus eliminating crippling student debt). This is a policy that should warrant discussion. Second, Cuba has transported a delegation of 160 Cuban health care professionals to Sierra Leone and expects to provide another 260 for Liberia. The first delegation was sent before President Obama announced a U.S. program of medical aid to West Africa.

It could be that if Americans were aware of the special training received by medical personnel in Cuba, particularly in Third World settings, they might suggest that United States and Cuban collaboration would increase the effectiveness of ending the threat of a spreading Ebola epidemic in Africa. These are just two policies worthy of conversation in the United States. (To its credit The New York Times, on its opinion page on October 20, 2014, published an editorial entitled “Cuba’s Impressive Role on Ebola.”)

In sum, the Joan Rivers one-liner is critical now. We need to talk about the reality that the United States is not a democracy. And as a few commentators have pointed out, democracy is dangerous. It is dangerous because the people will be able to participate in the decisions that affect their lives; class, race, and gender will not exclude participation in politics; and the whole reason for democratic institutions is to “promote the common good.” As Pennock put it the ideal democracy is one characterized by:

“Government by the people, where liberty, equality and fraternity are secured to the greatest possible degree and in which human capacities are developed to the utmost, by means including free and full discussion of common problems and interests.” (Roland J. Penncok, Democratic Political Theory, Princeton Press, 1979, 7)

To be clear, the United States is not a democracy. Progressives who believe it is fool themselves at the peril of the country. BUT, rather than disengagement, they should struggle all the harder “inside and outside” conventional political processes to achieve it. And struggles for equality, justice, and a sustainable environment are also struggles for democracy.