Working people are on the move and grassroots groups are demanding a fair minimum wage. 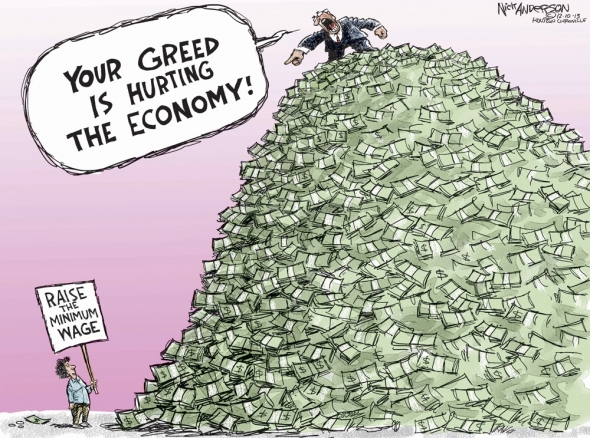 The experience of increasing poverty, economic marginalization, and the rise of political reaction against workers, unions, women, people of color, the right to vote, and basic dignity for the 99 percent has stimulated mass mobilizations in protest over the last two years.

From Arab Spring, to protests all across the Midwest in defense of worker’s rights, to the Occupy Movement, anti-racist campaigns in Florida and elsewhere against so-called “Stand Your Ground” laws, and the Moral Majority mobilizations inspired by fight backs against the suppression of voter rights, working people are on the move.

Inspired by an implicit vision of what a better society would look like, people sometimes engage in politics through campaigns involving particular issues. In Indiana and Georgia groups are demanding that their governors accept Medicaid expansion. In addition activists around the country are making modest but significant demands that the federal government and states increase the minimum wage. Labor, grassroots groups of various kinds, and sectors of the faith community have taken up the call. Even President Obama has urged Congress to pass legislation to raise the minimum wage.

Senator Tom Harkin and Congressman George Miller introduced the Fair Minimum Wage Act of 2013 which has served as an example of what grassroots groups are demanding. The Act calls for a raise in the federal minimum wage to $10.10 an hour by 2015. It would require wage adjustments each year based on changes in the cost of living. Finally, the law would require a raise in the minimum wage for “tipped workers,” from $2.13 to 70 percent of the minimum wage (theoretically additional wages would come from customer tips).

The defenders of the bill estimate that it would favorably impact 30 million workers: 88 percent adults (above teenage status), 56 percent of women workers, almost half of workers of color, and 17 million minimum wage workers who have children. They claim that the number of U.S. workers depending on low-wage jobs has increased significantly.

Since the recession 58 percent of new jobs have been low-wage and six of 10 top-growth occupations are low-wage.

Since the recession 58 percent of new jobs have been low-wage and six of 10 top-growth occupations are low-wage. Their median age is almost 35 years of age. Two-thirds of them are employed by large chains which are experiencing large rates of profit. (Some of these chains are dependent upon their low wage workers receiving Medicaid and other forms of assistance rather than adequate wages and benefits from their job.)

David Cooper (“Raising the Federal Minimum Wage to $10.10 Would Lift Wages for Millions and Provide a Modest Economic Boost,” Economic Policy Institute, Briefing Paper #371 December 19, 2013) presented a broad array of data on what effects raising the minimum wage to $10.10 by July 2016, would have on each state’s workers.

For example, such a law would directly affect over 1 million of Florida’s 7.7 million workers. This would impact 56 per cent of low wage workers above the age of 30; 46 percent of white workers, 20.1 percent of Blacks, 30.2 percent Hispanic. Twenty-eight percent were parents (11. 3 percent single parents). Forty-five percent of beneficiaries of a raised minimum wage would be workers with some college or bachelors’ degrees.

At the national level, as was suggested above, millions of workers would get higher wages and GDP would grow by about $22 billion, which would create 85,000 new jobs. Cooper concluded about the national impacts: “Raising the federal minimum wage to $10.10 by 2016 would lift the incomes of millions of working families, boosting their spending power at a time when the U.S. economy is in dire need of increased consumer spending.”

Where do we go from here? Raising the minimum wage is a moral imperative.

…while the stock market is closing at unprecedented highs, workers who make minimum wage are not recovering — they’re barely putting food on the table. Millions of low-wage workers in our country work hard day in and day out and still can’t afford life’s basic necessities. They are the restaurant servers feeding us, the people caring for our elderly or sick loved ones, and the workers keeping our buildings clean. They are our brothers, mothers, friends, congregants, and community members — and they are suffering silently, choosing between buying food, getting to work, and paying the rent.

…We believe in models in which employers treat their workers as human beings rather than as just another cost of doing business. We believe in putting purchasing power back into the hands of workers, who will spend those dollars in their local communities. We believe in an economy that is strong because workers have enough to live on and create demand for business. Better wages mean a real recovery: sustainable jobs, thriving families, and flourishing economies.

Legislation that raises the minimum wage is an important part of creating this vision.

This is more than a political issue — it is a moral imperative.