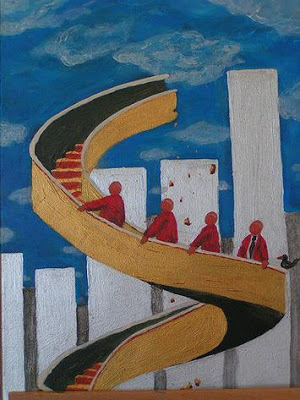 “The Corporate University.” Graphic from Occasional Links & Commentary.
Whose interests do they serve?
Universities and political conflict

Now, in the midst of a deep economic crisis, political and economic elites are lobbying to create new structures of power in higher education…

Since Arab Spring and the Occupy Movement almost every institution in American life — financial, corporate, political party, media, military, and religious — has appropriately become subject to scrutiny and evaluation. In each case analysts and activists have begun to raise questions about what these institutions look like, whose interests they serve, and how they contribute to the well-being of society.

Until recently colleges and universities have been largely above reproach. Research and education have been seen as the cornerstone of American democracy and economic development. The appointment of Governor Mitch Daniels as the new president of Purdue University and the firing and rehiring of the University of Virginia President Teresa Sullivan provide the occasion for a reexamination of higher education.

Institutions of higher education have traditionally performed four tasks in the service of maintaining and enhancing the development of the other institutions referred to above. First, universities, particularly since World War II, have provided research resources to produce the products and technologies that have stimulated the capitalist system.

Often basic research has fed into major enterprises in society, from promoting a global food system, to building sophisticated armies, to developing new high speed systems of communication that maximize control of economies and peoples. Major universities bring together talented research scholars and public and private research dollars to create inventions that promote greater control of nature and people and to expand profit.

Second, universities train work forces. Some graduates will become the research scholars who will continue the tradition of study and economic development to advance the economy and the polity further. Others will be provided the skills to work in the private and public sectors to carry out the work of institutional perpetuation.

Corporate managers, computer specialists, tourism experts, and employees in the public sphere are trained at the modern university. And, increasingly universities train the soldiers who will fight the wars that the United States continues to fight.

Third, universities provide an education that in the main facilitates the transfer of legitimated knowledge to consumers of that knowledge. Particular attention is given to the promotion of a scientific worldview that reduces physical and social reality to a multiplicity of “variables” that can be studied with statistical rigor. Knowledge is primarily scientific knowledge.

Legitimated knowledge that is passed along to college students also includes highly selective portraits of how economies work, what constitutes democratic political institutions, and what constitutes standards of quality in the arts. In subtle forms, universities pass along celebratory, often uncritical, images of the society in which students live.

Finally, universities are credentialing institutions. They reward students with degrees, recommendations, and honors, which can be used as licenses to participate in the other institutions in society. Even when political and economic elites receive prestigious degrees through family connections, it is the degree that helps the accumulation of power.

The four functions — research, training, legitimizing, and credentialing — have changed concretely over time. For example, in the United States, the development of the modern university paralleled the industrial revolution. Prestigious universities, such as Harvard, initiated modern departments at the dawn of the twentieth century replacing the primacy of theology and law with economics, business administration, and industrial engineering.

Training in fields such as education was designed to create a literate work force that could staff the factories of modern society. And social sciences were created to develop theories that comported with industrial development, such as Social Darwinism. These theories largely justified the distribution of wealth and power within societies and in the international system.

After World War II higher education took on vital functions in new ways. The GI Bill funded college education for veterans to train the scientists and managers of the new age. Also, higher education would credential students to be placed in higher paying jobs so that they could earn enough to buy the goods that a booming American economy was producing.

By the 1960s, higher education experienced enormous growth. For University of California President Clark Kerr, the “multiversity”was the institution critical for the development of a new global economy, scientific and technological advances, and the invention of new tools to fight the Cold War. In addition, social scientists and economists, studying development, would generate theories to guide public policy, particularly in poorer countries experiencing revolutionary ferment.

The massive growth in higher education from the 1960s to the new century led to increased university budgets, higher tuition costs, overtrained and underemployed college graduates, and a layer of overpaid administrators who had taken over the operations of most universities from the professor ranks. In addition, many non-professional workers at the university kept universities operational and were paid a living wage with justifiably secure benefits.

Now, in the midst of a deep economic crisis, political and economic elites are lobbying to create new structures of power in higher education while still supporting research, training, legitimating, and credentialing. The approach that is increasingly promoted by political leaders, educational foundations, and most important, boards of trustees of universities, is what Kevin Phillips labeled “market fundamentalism.”

The market fundamentalist approach emphasizes cutting public support for higher education and reducing financial support for students, particularly underrepresented students. In other words, as opposed to the era of the GI Bill, the operant vision is ultimately to reduce access to higher education which will contribute to the increasing inequality in wealth and income in the United States.

What is new about the crisis in higher education today, what appointment of new presidents such as Tea Party friend Mitch Daniels represents, is that economic and political elites wish to continue the traditional functions of the university while reducing costs in higher education.

They want to transfer continuing costs to students and workers at the university. They are working to streamline university education to research on corporate agriculture, medicine, computer technology, military developments, and allied fields.

And they want to cut educational programs that link research, education, and community service. This may entail eliminating programs that cannot be linked to the making of profit, such as in literature, the arts, and various social sciences and cultural studies. This is probably what the U.S. Chamber of Commerce meant when it warned of “growing skepticism about whether those lucky enough to graduate have acquired the skills and knowledge necessary for success in the 21st century economy.”

And finally, since politics has never been absent from debates about higher education, in today’s context corporate elites including those in the media, wish to eliminate the enduring tradition of “academic freedom” which has celebrated the view that the university must be a venue for the pursuit of “the marketplace of ideas.”

Expect the university to be another emerging site for contestation and political struggle.