U.S. efforts in Venezuela and the Ukraine exemplify imperialism engineered through an embedded, extra-political ‘deep state.’ 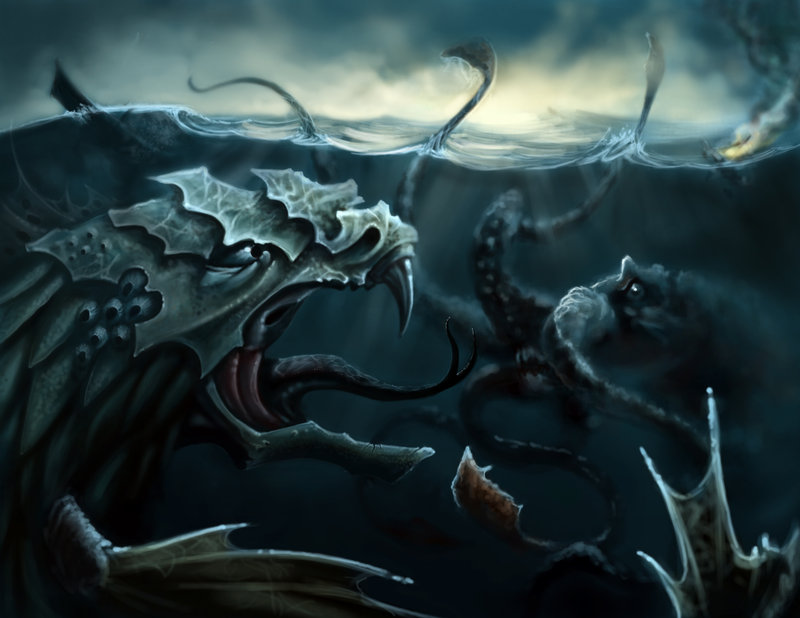 The ‘deep state’ at work? Digital illustration by ThranTantra / Deviant Art. Image from Online University of the Left.

I have been teaching courses on United States foreign policy for about 40 years now and my sense of outrage at the enduring ruthlessness of that policy never abates.

We are just a few months away from what was a threatened U.S. attack on Syria which was beaten back by popular pressures. However, the hawks from scholarly, journalist, and political communities are ratcheting up pressure to return to the war option against that country; hoping that the American people’s capacity for resistance will have dissipated. In related demands, many foreign policy influentials are calling for the U.S. to withdraw from serious negotiation of differences with Iran.

And now, the United States government and its compliant media are mobilizing the citizenry to accept economic and even military interventions in Ukraine and Venezuela. We are reminded that in all four cases over the years — Iran, Syria, Venezuela, and Ukraine — there have been street protests and violence against alleged authoritarian rule. Although the complaints of protesters have had varying degrees of validity, the accuracy of claims by protesters has been of little consequence to U.S. policy makers.

What is most puzzling to observers is why the United States still regards itself as the legitimate source of resolving disputes and transforming political institutions virtually everywhere. Of course, as the preeminent imperial power (in the tradition of Rome, Spain, France, Great Britain, Germany, the former Soviet Union, and others) economic advantage, political power, geographic positioning, the acquisition of resources and cheap labor, figure prominently as causes.

The contradiction that still needs an explanation is the fact that for the most part the American people oppose wars and intervention. This is particularly so in the 21st century when so much pain and suffering has been caused by wars in Iraq and Afghanistan.

In 2008 Americans elected Barack Obama, in part because he had opposed the war in Iraq and had called for a new American foreign policy based on respect for other nations and peoples. He promised to use diplomacy not war as the primary tool of international relations and in some instances has tried to do that. He probably wanted to end the two awful wars and show some respect for others, even while promoting a neoliberal global agenda in a world of diverse centers of power and wealth.

But why have Obama’s cautious efforts to promote United States economic and political interests been contradicted by the patterns of interventionism and the rhetoric of military globalization so common over the last few years?

The answer can be found in a variety of explanations of United States imperialism that emphasize what Mike Lofgren calls the “deep state.” Lofgren defines the “deep state” as “…a hybrid association of elements of government and parts of top-level finance and industry that is effectively able to govern the United States without reference to the consent of the governed as expressed through the formal political process.” (Mike Lofgren, “Anatomy of the ‘Deep State’: Hiding in Plain Sight,” Online University of the Left, February 23, 2014).

The power to make critical decisions resides not in the superstructure of the political process, but in powerful institutions embedded in society that can make decisions without requiring popular approval.

The roots of analyses like those above are that power to make critical decisions resides not in the superstructure of the political process, the place where competitive games are played for all to see, but in powerful institutions embedded in society that can make decisions without requiring popular approval.

Over and over again, the “deep state” apparatus has led the American people into war or covert interventions that destroyed the rights of people in other countries to solve their own problems. In the end these hidden institutions have involved the United States in death and destruction all across the globe.

Two current examples come to mind, Venezuela and Ukraine. In the Venezuelan case, the United States has worked tirelessly to undermine and overthrow the regime that came to power in 1999 led by Hugo Chavez, and almost succeeded in carrying out a coup in 2002.

Subsequently, this regime, evolving over time, has become a model for 21st century socialism whose popularity is spreading across South and Central America. Its centerpiece is prioritizing the interests, needs, and wishes of the vast majority of people in Latin America in historically unequal and stratified societies.

Currently, street protest against the Maduro regime (Maduro was elected president after the untimely death of Chavez in March 2013, and his party won large victories in municipal elections last December) have spread, with violence, across wealthy neighborhoods of Caracas.

Various agencies of the United States government have engaged in efforts to undermine and overthrow Chavez’s Bolivarian Revolution since its inception much like the covert programs President Nixon carried out to overthrow the elected government of Salvador Allende in Chile in 1973.

Mark Weisbrot pointed out recently (The Guardian, February 18, 2014) that “…there’s $5 million in the 2014 U.S. federal budget for funding opposition activities inside Venezuela, and that is almost certainly the tip of the iceberg — adding to the hundreds of millions of dollars of overt support over the past 15 years.”

Venezuelan opposition leader Leopoldo Lopez was trained in U.S. prep schools and Harvard University and was funded by the National Endowment for Democracy and the U.S. Agency for International Development…

George Ciccariello-Maher, Professor of Political Science, Drexel University, reported on Democracy Now! (February 20, 2014) that Venezuelan opposition leader Leopoldo Lopez was trained in United States prep schools and Harvard University and was funded by the National Endowment for Democracy and the U.S. Agency for International Development to establish an anti-Chavista party.

…as Chavez came to power, the traditional parties of Venezuela collapsed, and both the domestic opposition and the U.S. government needed to create some other vehicle through which to oppose the Chavez government, and this party that Leopoldo Lopez came to power through is one of these — as one of those vehicles.

Journalist Robert Parry has recently described the character of the “deep state” and patterns of interference in Ukraine (Robert Perry, “A Shadow US Foreign Policy,” consortium news. com, February 27, 2014). Funding for covert operations in support of “democratization” was initiated by Congress in 1983 when it established the National Endowment for Democracy. NED currently receives $100 million a year to engage in non-transparent activities such as in Venezuela and Ukraine.

Parry raises the issue of who is controlling U.S. covert operations:

NED is one reason why there is so much confusion about the administration’s policies toward attempted ousters of democratically elected leaders in Ukraine and Venezuela. Some of the non-government organizations (or NGOs) supporting these rebellions trace back to NED and its U.S. government money, even as Secretary of State John Kerry and other senior officials insist the U.S. is not behind these insurrections.

As a result of ousted President Yanukovych’s turn away from joining the European Union, which would require Ukraine to accept IMF/EU austerity policies, the deep state institutions shifted from supporting the elected Ukraine president to funding various opposition elements to him.

Parry reports that Carl Gershman, neoconservative and president of NED, wrote in The Washington Post last September that the U.S. should push all the countries in Central Europe to accept so-called free trade agreements and the neoliberal policy agenda. Although the long-term goal would be removing Putin from office, Parry said that NED has funded 65 projects in Ukraine creating a “shadow political structure of media and activist groups.” According to Gershman, “Ukraine is the biggest prize.”

It is likely that much more data will be uncovered about U. S.  involvement in Ukraine, Venezuela, and the dozens of other countries in which the deep structures of the national security apparatus operate.

It is likely that much more data will be uncovered in the weeks ahead (primarily in alternative media) about United States involvement in Ukraine, Venezuela, and the dozens of other countries in which the deep structures of the national security apparatus operate.

For now, several points can be made:

First, a multiplicity of agencies, bureaus, funded organizations (often called non-governmental organizations or NGOs) engage in semi-independent foreign policies with political groups in other countries. In addition, banks, multinational corporations, so-called human rights organizations, and other NGOs are part of the panoply of interventionist organizations that promote an imperial agenda.

Second, it is not always clear that deep state structures reflect the official foreign policies defined by the President or members of the National Security Council who are supposed to be the public face of United States foreign policy to the world and the American people.

Third, these deep structures promote long discredited foreign policies that have their roots in the post-World War Two period or even further, the Russian Revolution (when the United States and nine other countries sent troops to help the counter-revolutionaries to overthrow the new government established by the Bolsheviks).

Fourth, these deep structures also promote the neoliberal policy agenda across the global economy: privatization of public institutions, so-called “free markets,” cutting government services so that countries can pay back loans from international financial institutions, export development policies, and disempowering workers, peasants, and those barely surviving in the informal sector.

Fifth, even if the President and key foreign policy decision-makers are not in control of the deep state they still bear responsibility for the correction of policies created by it.

Finally, while working against deep state imperial policies, peace activists should at the same time oppose violence, repression, dictatorship, and rule by economic elites in those states under assault by the United States.

Read more of Harry Targ’s articles on The Rag Blog.