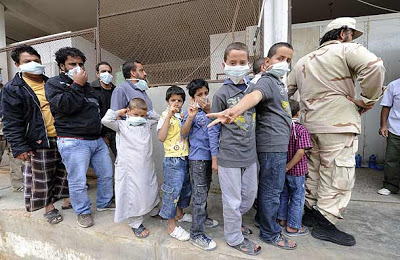 Libyan men and children queue up to view the corpse of Muammar Qaddafi. Photo from Getty Images.
U.S. foreign policy and
the respect for human life

This past week American politics took a peculiar turn. A new narrative about the Obama administration began to be systematically presented to the liberal media audience. Reviewing his three-year-old administration, the new construction is that on the national security front Obama is markedly more tough and effective than Republicans claim.

The brutal murder of Muammar Qaddafi by rebellious opponents on global television, followed by celebratory remarks by the president, his secretary of state, and other members of the administration, capped three years of U.S. violence on people of the Global South.

Many critics of Obama’s less than forceful advocacy of economic justice have shifted their focus to a frame of the president as resolute in protecting American national security in the face of a challenging world. They even have implied that Obama is more of a tough guy than his predecessor ever was.

What is the evidence for this? Frankly, President Obama has unleashed new variants of the U.S. killing machine. Violence against Asian, Middle Eastern, and African people has been visibly celebrated in public view. The numbers of victims killed may not be greater than that of prior administrations but the celebration of public murders seem to have increased.

Early in the Obama administration, the president made a decision to assassinate Somali pirates, pirates who had kidnapped westerners off the Horn of Africa. Last May, with the president’s diplomatic team staring at a television screen during a nail-biting meeting, Navy Seals invaded the compound housing Osama Bin Laden who was unceremoniously killed and dumped in the sea. The media highlighted Americans who celebrated this killing.

Four months after the successful murder of Bin Laden, Obama’s crack team assassinated Anwar al-Awlaki, American citizen and alleged leader of Islamic terrorists, who threatened the United States. Abdul Rahman al-Awlaki, his teenage son, and others were summarily executed for crimes for which they had not been accused or tried.

In addition, President Obama agreed to work with allies, Great Britain and France, who held colonial empires in the Middle East and North Africa in the twentieth century. They mobilized a campaign in the United Nations to gain public legitimacy for military intervention in Libya to overthrow the long-time idiosyncratic leader, Qaddafi, whose tiny nation from time to time supported dissidents in the Arab and African worlds.

The initial claim was that the force, a NATO operation, would be humanitarian, saving the lives of those who were rebelling against the Libyan dictatorship.

The rebels, unlike the nonviolent activists in Tunisia and Egypt where western support was minimal, were armed, probably by the West, and launched a civil war against the regime. Then NATO air power was used for seven months to pound Libya until the Qaddafi military collapsed.

The “humanitarian” intervention took between 30,000 and 50,000 lives, dissidents as well as Qaddafi loyalists. Shortly after the war ended with the death and mutilation of the dictator’s body on a street in Sirte, President Obama declared victory for the Libyan people — although who the rebels are remains unclear — and pronounced what he referred to as a new measured and wise U.S. foreign policy.

The new foreign policy, what might be called the “Obama Doctrine,” has four parts. First, the United States, as the last remaining superpower, and as the defender of the global moral standard, could once again assume the right and responsibility to intervene militarily to preserve and enhance human rights around the world. As the president put it, reflecting on the recent killings in a press conference after the death of Qaddafi was announced, U.S. actions have demonstrated “…the strength of American leadership across the world.”

Second, U.S. humanitarian interventions will be carried out in conjunction with military operations with our friends, presumably equally committed to high moral standards. In Obama’s words; “We’ve demonstrated what collective action can achieve in the 21st century.” NATO, an alliance established in 1949 to protect Western Europe and North America from security threats from “international communism,” now will police the world.

Third, new technologies make it possible for the United States to police the world without “boots on the ground.” Given the new technology, the free world can intervene virtually anywhere, anytime, through the use of incredibly sophisticated drone warfare. In the Libyan case, as the president said, “without putting a single service member on the ground, we achieved our objectives, and our NATO mission will soon come to an end.”

U.S./NATO warriors can target enemies without personal danger to themselves while working in antiseptic offices in the United States or Europe, or on small bases in the Indian Ocean, the Middle East, or Africa. Nick Turse, author of The Complex (2008) estimates that at least 60 drone bases are operational around the world, ready to hit enemy targets virtually anywhere.

Fourth, the Obama Doctrine makes it clear that human life is not sacred and that due process, the hallmark of western legal traditions, is now superseded by the unilateral right of key decision-makers to kill potential, as well as actual, enemies of the United States. To paraphrase the old definition of the state as that institution that holds the monopoly of the legitimate use of force, the state now holds the monopoly of legitimate use of murder.

In the end, the oft-quoted remark by General William Westmoreland about the Vietnamese enemy in the 1960s may more accurately be restated: “The United States government does not put the same high price on human life as other countries.”

Fortunately for progressives, mass movements exist that show the world that many Americans do not stand with their government’s use of violence. Progressives oppose mass murder, targeted executions, the death penalty anywhere, and despicable drone warfare. Progressives also respect the right and responsibilities of others to choose their own political destinies.

[Harry Targ is a professor of political science at Purdue University who lives in West Lafayette, Indiana. He blogs at Diary of a Heartland Radical — and that’s also the name of his new book which can be found at Lulu.com. Read more of Harry Targ’s articles on The Rag Blog.]
The Rag Blog