Harry Tarq : JFK and Obama Inspired Something Bigger Than Themselves 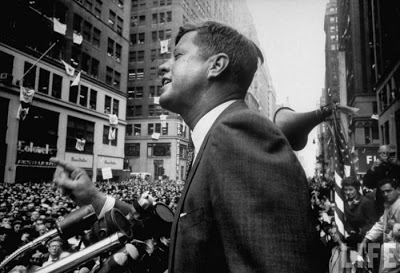 Jack Kennedy inspired idealism in youth of the 60s. Photo from Dysonology.
JFK and Obama:
Leaders who knew not what they were creating

I walked to campus one fall morning in 1960 and came upon a large crowd surrounding the main quadrangle at the University of Illinois. I asked someone hanging around what was up. He said that Democratic candidate for president John F. Kennedy was going to appear at the steps of the auditorium building at one end of the large area surrounded by classroom buildings.

I stayed and found his talk mildly interesting. I was studying journalism, found politics intriguing, and wanted to grow up to be a columnist like Walter Lippman. I was impressed by JFK’s youth, energy, glamour, as politicians go, and he was the polar opposite of the boring Republican choice, Richard Nixon.

I had not yet begun to read the Beat poets, Paul Goodman, William Whyte’s The Organization Man, or other such analysts of the 1950s “dark ages,” but I intuitively grasped the moment. I began to see the emergence of a new political generation in America. Later that fall Eleanor Roosevelt appeared at the YMCA to campaign for JFK. I did know that she spoke for the legacy of the New Deal of the 1930s and I admired her greatly. I probably saw a connection between that liberal legacy and the possibilities for the 1960s.

Two months later JFK won the election, probably with a significant assist from late night reports of Cook County votes which made Illinois a win for him. His election, of course, was followed by a stirring inaugural speech, one in which he called upon young people in particular to do things for their country, not just for themselves. I was too naïve to ask: “What did you have in mind?”

JFK launched a figurative shuttle from Harvard Yard to the White House. Bright, young intellectuals, policy analysts with connections to big corporations, theorists of modernization and development in the so-called “Third World,” liberal anti-Communists, and academics with a preference for moderate Democrats flew in to help the Kennedy team craft policies to expand capitalism on a worldwide stage.

Their project included developing policies that would transform the growing opposition to colonialism and neocolonialism in Africa, Asia, and Latin America into a set of regimes that would be sufficiently anti-Communist to accommodate global capitalism.

While many people of my generation grew more excited by the new administration and how we could participate in the construction of radical change at home and abroad, Kennedy was expanding U.S. military activity in Vietnam, authorizing an invasion of the island 90 miles from our shores by Cuban counter-revolutionaries, dramatically increasingly military spending, and shifting the Pentagon from old-style professional militarism to new techniques of scientific management.

At home the administration was trying to figure out ways to “cool out” Southern militancy, temper opposition to segregation, and maintain support for the Democratic Party in the weakening “Solid South.”

I remember all this as we reflect on the 50-year anniversary of the dawn of the Kennedy era. We may quibble about when “the 60s” really began. Some might begin their narrative with the Montgomery Bus Boycott of 1955 or the publication of The Catcher in the Rye or Ginsberg’s reading of “Howl” in the Bay area, or manifestations of enthusiasm as Fidel Castro and the 26th of July Movement marched into Havana in January 1959.

However, alternatively, a case could be made that the 60s began with the Kennedy inaugural address.

The main point I take from my remembrances of JFK is the fact that he did turn on a generation to the possibilities of changing America at home and abroad. He presented a vision of a political regime in which citizens would want to participate for their own betterment and the betterment of others. While he surely did not mean to address these issues, his campaign, speeches, and persona conveyed a message of anti-imperialism, social and economic justice, and profound opposition to racism.

Ironically, he meant none of these but 60s youth assumed that that was what he stood for and wanted us to commit our lives to achieving. If Kennedy had lived, he would have opposed the movements against racism, war, and gender equality even more than his successor LBJ, but he turned us on to want to achieve these goals. That is the significance of JFK for the 60s and what followed.

Fast forwarding 48 years, a young Barack Obama, by his style, language, gestures, and some of his words, alluded to the same images of fundamental change we derived from JFK in his day. Young people flocked to the Obama campaign with a gusto not seen by young people politically since the 60s.

The record is still out but we can only hope that the fire and passion that stimulated youth for Obama in 2008 will ignite radicalism in the years ahead as JFK did in the 1960s; hopefully with Obama’s support, but if not, without it.

1 Response to Harry Tarq : JFK and Obama Inspired Something Bigger Than Themselves