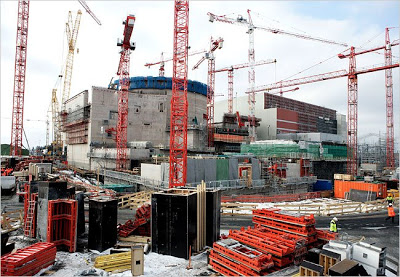 In a devastating pair of financial reports that might be called “The Emperor Has No Pressure Vessel,” the New York Times has blazed new light on the catastrophic economics of atomic power.

The two Business Section specials cover the fiasco of new French construction at Okiluoto, Finland, and the virtual collapse of Atomic Energy of Canada. In a sane world they could comprise an epitaph for the “Peaceful Atom.” But they come simultaneous with Republican demands for up to $700 billion or more in new reactor construction.

The Times’s “In Finland, Nuclear Renaissance Runs Into Trouble” by James Kanter is a “cautionary tale” about the “most powerful reactor ever built” whose modular design “was supposed to make it faster and cheaper to build” as well as safer to operate.

But four years into a construction process that was scheduled to end about now, the plant’s $4.2 billion price tag has soared by 50% or more. Areva, the French government’s front group, won’t predict when the reactor will open. Finnish utilities have stopped trying to guess.

Finnish inspectors say Areva allowed “inexperienced subcontractors to drill holes in the wrong places on a vast steel container that seals the reactor.” The Finns have also cited Areva for “the attitude or lack of professional knowledge of some persons.”

Areva hopes to build similar reactors in the U.S. Its boosters have promised cheaper, cleaner, faster nuke construction with standardized designs like the one at Okiluoto. But “early experience suggests these new reactors will be no easier or cheaper to build than the ones a generation ago” whose price tags soared by 700% and more, and whose completion schedules ran into the decades.

Areva’s second “new generation” project at Flamanville, France, is also over budget and behind schedule. Cracks have turned up in critical steel and concrete components, along with revelations that critical work has been done by unqualified welders.

The US Nuclear Regulatory Commission has not approved the Areva design in use at Okiluoto and Flamanville. Four other designs under consideration are also mired in process. Some are still being altered. A post 9/11 issue is their ability to withstand a jet crash, which the 104 US reactors currently licensed to operate were not forced to consider.

The fiascos in Finland and Flamanville have thrown Areva into economic chaos now being mirrored at the Atomic Energy of Canada, Limited. Once touted as a global flagship, AECL sucked up 1.74 billion Canadian dollars in subsidies last year and has been a long-term money loser which the government has now announced it wants to sell.

The Paris-based energy expert Mycle Schneider reports that of 45 reactors being built worldwide, 22 are behind schedule and nine have no official ignition schedules.

Despite the torrent of bad economic indicators, Republicans like Sen. Lamar Alexander (R-TN) continue to demand massive government funding for new reactor construction. Alexander says he wants the US to build as many as 100 new reactors here, even though the private sector won’t finance or insure them. The media is citing the idea as a $700 billion package, but in fact the project price of building new reactors is on the rise, and by some estimates has already exceeded $10 billion each. The Department of Energy has cited four finalists for $18.5 billion in loan guarantees voted in with the 2005 Bush Energy Plan. Florida and Georgia have raised rates to pre-pay proposed new reactors.

As Congress deals with a wide range of energy-related legislation, the nuclear industry is desperately grabbing for any federal money it can get. One bill after another has been floated with nuclear hand-outs hidden in various nooks and crannies.

As the comparative price of efficiency and renewables plummets, the window may be closing fast on the possibility of building new nukes in the US, raising the industry’s desparation level.

This battle will certainly rage for years to come. But the appearance of such brutally bad news from Finland and Canada in the Business Section of the New York Times bodes ill for an industry that, after fifty years, cannot get private funding or liability insurance, cannot deal with its wastes, and now cannot demonstrate the ability to produce new product anywhere near on time or budget.

At very least, Paul Joskow of MIT tells the Times, the rollout of new nukes may be “a good deal slower than a lot of people were assuming.”

[Harvey Wasserman is an author, a journalist, an educator, an activist, and a utopian thinker. His Solartopia! Our Green-Powered Earth is available at solartopia.org. This article was also published by The Free Press.]