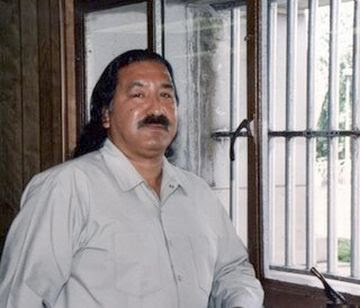 The circumstances of the prosecution, and the legal history of the case, involve thousands of pages of missing evidence, compromised witnesses and procedures so twisted as to stagger the imagination and leave any sense of fair play and reasonable jurisprudence buried in the dust.

Native American activist Leonard Peltier has been in prison for more than 12,226 days, more than 33 years. His is one of the longest ordeals of any political prisoner in human history.

With him, our souls have suffered. Our bodies ache for his freedom.

Today, July 28, 2009, Peltier goes before the Federal Parole Commission in Lewisburg, Pennsylvania. As you read this, all over the world, beginning in the wee hours of the morning in the South Pacific, prayer vigils, peace marches, ecumenical gatherings, group chantings and all forms of individual meditation accompany this hearing. It is one of the most important tests of the new Obama Administration.

Peltier was charged more than a third of a century ago with the murder of two FBI agents. The circumstances of the prosecution, and the legal history of the case, involve thousands of pages of missing evidence, compromised witnesses and procedures so twisted as to stagger the imagination and leave any sense of fair play and reasonable jurisprudence buried in the dust.

Through it all, Peltier has maintained his dignity and strength with astonishing grace. He will be 65 years old in September, having spent more than half his life behind bars. His body is wracked with prison-related ailments. He has great grandchildren he has never seen.

Supporters believe the time is “favorable” for his release. The four-member Parole Commission that will decide on his plea is chaired by Isaac Fulwood, Jr., originally appointed by George W. Bush, elevated to the Chair in May by Barack Obama.

Obama himself has the power through various legal means to end Peltier’s torture and make him a free man.

Peltier’s defense attorney, Eric Seitz, has expressed optimism that the Parole Board will grant Peltier his freedom, especially given Leonard’s exemplary behavior in prison, the utter collapse of the case against him, his health, age and other factors, not least of which may be a changed political and cultural climate. But Seitz has warned of previous disappointments in an interview with Amy Goodman on Democracy Now.

Millions of supporters worldwide have suffered with Leonard over the decades as with no other political prisoner. His case embodies the tortured relationship between the U.S. Government and the Native American community, says Tony Gonzalez (of the Comca’ac-Chicano Tribe) of the American Indian Movement founded, he says, 41 years ago today.

Meaningful steps toward healing that relationship will be very hard to take until Leonard Peltier is free to re-join his family.

This is a critical moment in the Obama Era. Bill Clinton was thoroughly briefed by numerous people very close to the Peltier case, but did not free him. Constitutional scholar Barack Obama is also well aware of this horrific imprisonment.

Peltier’s freedom marks a monumental corner that must be turned. For the millions who have ached through the terrible injustice and sheer physical and spiritual pain of this imprisonment, it is a moment of liberation that must come.

Only a strongly supportive political climate can make it happen. Call your Senators and Representatives as well as the White House and Parole Commission, newspapers and radio shows, web friends and neighbors down the street. Meditate, pray, march, dance, sing, shout, laugh, cry… do whatever you can to help move this man out of his jail cell and into the open air after 33 hellish years.

This imprisonment must end. Rarely has it been more true that freeing a single human being will help free us all.

For more see: My Life is my Sundance, by Leonard Peltier; In the Spirit of Crazy Horse, by Peter Mattheissen; Robert Redford’s Incident at Oglalla; leonardpeltier.net; whoisleonardpeltier.info.