Another Terrorist Attack May Put the Military in Charge 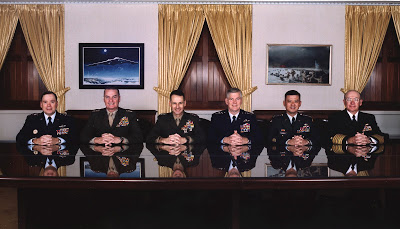 WASHINGTON — A shift in authority has given military officials at the White House a bigger operational role in creating a backup government if the nation’s capital were “decapitated” by a terrorist attack or other calamity, according to current and former officials involved in the decision.

The move, which was made in the closing weeks of the administration of President George W. Bush, came after months of heated internal debate about the balance of power and the role of the military in a time of crisis, participants said. Officials said the Obama administration had left the plan essentially intact.

Under the revamped structure, the White House Military Office, which reports to the office of the White House chief of staff, has assumed a more central role in setting up a temporary “shadow government” in a crisis.

And the office, a 2,300-person outfit best known for flying Air Force One, has taken on added responsibilities as the lead agent in shepherding government leaders to a secure site at Mount Weather in rural Virginia, keeping classified lists of successors and maintaining computer systems, among other operational duties. Many of these types of tasks were previously handled by civilians at other agencies, led by the Federal Emergency Management Agency.

Supporters of the plan inside the Bush White House, including Vice President Dick Cheney’s office, saw the erratic response to the Sept. 11 attacks in 2001 and Hurricane Katrina in 2005 as a mandate for streamlining an emergency response process they considered clunky because it involved too many agencies.

Yet during the debate, officials at other agencies that have traditionally played critical roles expressed concern that the new structure placed too much power in the hands of too few people inside the White House. They also saw the move as part of the Bush administration’s broader efforts to enhance the power of the White House.

Though the office reports to the White House, many of its employees are uniformed soldiers, and it has sometimes been led by a military officer. So concerns about the perception of growing military influence in the emergency process set off an internal struggle, and the White House decided not to move ahead with a more ambitious proposal to give the power of the purse to the military arm, rather than FEMA, for budgeting the emergency operations, one official said.

While Obama administration officials would not discuss details of their continuity plan, they said the current policy was “settled,” and they drew no distance between their own policies and those left behind by the Bush administration.

Obama transition officials were told of the changes during a joint emergency exercise held in January, one of several dry runs using the new structure, officials said.

Officials in the Obama White House appeared unaware of the tensions the plan had set off. They rejected as “flat-out wrong” the idea that military officials in the White House had assumed any “decision-making authority” in a crisis but declined to discuss their logistical responsibilities.

“Many components of government, within civilian and defense establishments, play an important support role to ensure that our constitutional form of government, and its civilian leadership, prevails even under the most catastrophic circumstances,” said Nick Shapiro, a White House spokesman.

Former Representative Tom Davis, the top Republican on the House Committee on Government Reform when the debate started, said his committee had never been informed of the changes. Mr. Davis said he believed it should have been told, though he said he did not disagree with the changes.

A directive by President Bush signed in May 2007 set in motion a classified review at the White House that led to the changes put in place at the very end of his administration.

Before, some 200 people governmentwide were assigned to Mount Weather in a catastrophe to set up a working government under the direction of FEMA. The number of officials from outside the White House has significantly shrunk , and the new team is made up mostly of White House civilian and military personnel, the officials said.

The new pecking order for emergency operations order was made clear when non-White House officials central to the old command structure arrived at Mount Weather for a training exercise last year. They found their meeting space gutted to make way for a new office planned for the White House team.

Bush administration officials saw FEMA as ill-equipped to handle a governmentwide emergency, and they cited problems with the agency’s execution of a classified training exercise in May 2008 as evidence.

But the White House Military Office has recently had its own problems.

President Obama’s civilian director of the office, Louis Caldera, authorized what turned out to be an alarming photo shoot of a low-flying Air Force One speeding by the Statue of Liberty and the Manhattan skyline. Mr. Caldera resigned in May.

This entry was posted in RagBlog and tagged Military, U.S. Government, War on Terror. Bookmark the permalink.