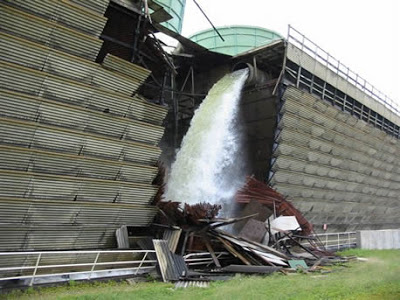 A portion of a cooling tower at Vermont Yankee in Vernon, Vt, just after its collapse in August 2007. Earlier this year Vermont Yankee cut its power back 60% due to a radioactive leak.
The GOP’s 100-Reactor/Trillion-Dollar Energy Plan Goes Radioactive

As the prospective price of new reactors continues to soar, and as the first “new generation” construction projects sink in French and Finish soil, Republicans are introducing a bill to Congress demanding 100 new nuclear reactors in the US within twenty years. It explicitly welcomes “alternatives” such as oil drilling in the Arctic National Wildlife Refuge and “clean coal.” Though it endorses some renewables such as solar and wind power, it calls for no cap on carbon emissions.

According to the New York Times, this is the defining GOP alternative to a Democratic energy plan headed for a House vote later this month.

But niggling questions like who will pay for these reactors, who will insure them, where will the fuel come from, where will waste go and who will protect them from terrorists are not on the agenda. Given recent certain-to-prove-optimistic estimates of approximately $10 billion per reactor, the plan envisions a trillion-plus dollar commitment to a newly nuke-centered nation.

Nuclear power requires energy-intensive activities such as uranium mining, milling, fuel enrichment, plus other carbon expenditures for plant construction, waste management and more. Reactors also convert buried uranium ore into huge quantities of heat, much of which becomes hot water and steam emitted into the environment. Reactors in France and elsewhere have been forced to shut because adjacent rivers have been taken to 90 degrees Farenheit by hot water dumped from reactor cooling systems.

None of this troubled GOP hearings this week on the future of atomic energy. There were no answers to how new reactors would be insured. Since 1957 the federal treasury has been the underwriter of last resort for potential reactor disasters. Renewed in the 2005 Bush energy plan, the commitment applies to all new reactors.

So reactors licensed to operate through 2057—as would be virtually certain under the GOP plan—would extend to a full century the atomic industry’s inability to cover its own risks. Neither the Obama Administration nor the GOP has presented detailed plans for dealing with such disasters, or explained how they would be paid for.

Despite the GOP’s endless focus on the terror attacks of 9/11/2001, no significant structural upgrades have been made to protect the currently licensed 104 US reactors from an air attack. The new reactors will be required to demonstrate an ability to resist a jet crash, but testing that requirement remains an open issue.

The initial experience with building new reactors runs parallel. As reported in the New York Times and elsewhere, French-financed construction projects at Flamanville, France, and at Okiluoto in Finland have soared hugely over budget and behind schedule. Much of the economically catastrophic experience endured by utilities and rate payers in building the first generation of reactors in the 1960s-1990s appears to be repeating itself with even bigger deficits. The French government’s front-group Areva, which is building the new plants, has sunk into serious financial and political chaos, with potentially devastating implications for this much-touted “new generation” technology.

Recent radioactive leaks in Vermont and Illinois have underscored bitter disputes over re-licensing the 104 “first generation” US reactors. Some could now operate past the 60-year mark, even though most were originally designed to operate just 30, and all have serious issues ranging from frequent leaks to structural decay, unworkable evacuation plans and much more.

Meanwhile, with the apparent cancellation of the proposed Yucca Mountain nuclear waste dump, the industry is no closer to dealing with its radioactive waste than it was 50 years ago.

None of which seems to daunt the industry or the Nuclear Regulatory Commission, which has yet to turn down a proposed re-licensing. Two states—Florida and Georgia—have now passed rate hikes aimed at funding new reactor construction. And Obama’s Department of Energy may soon dole out $18.5 billion in construction loan guarantees put in place by the Bush 2005 Energy Plan. The DOE has identified four prime candidates for the money.

Nonetheless, since 2007 reactor opponents have three times defeated proposals for $50 billion in loan guarantees for new reactor construction. There is no indication from Wall Street and what’s left of the private banking community that without heavy government guarantees, investments in nuclear power plants are at all attractive.

But while billing itself as the party of free enterprise—especially when it comes to health care—the GOP has made itself the unabashed champion of a technology that can’t raise private capital without taxpayer backing, can’t get private insurance, can’t manage its wastes, and shows no sign of offering a meaningful solution to the problem of carbon emissions.

What the nuclear power industry does seem to have, however, is unlimited funding to push its product in the corporate media and Congress. This latest GOP proposal for 100 new nukes may not fly in this House session.

Sadly, Democratic-sponsored legislation is not nuke-free. The situation in Congress remains fluid and unpredictable, often changing from day to day. Various aspects of bills supported by various Democrats include hidden subsidies, disguised loan guarantees, counting nuclear power as “green” in proposed renewable portfolio standards, backdoor handouts and more. Sometimes the boosts are buried in obscure corners of sub-clauses that border on the indecipherable.

But surface they do, again and again. Thus far the anti-nuclear movement has done a remarkable job of blocking the worst of them. Continuing to do that will require eternal vigilance, endless grassroots action and the steadfast belief that in the long run, our species has the will and foresight to somehow avoid radioactive self-extinction.