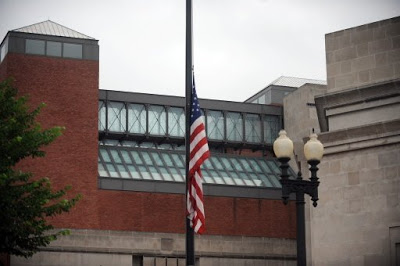 The US flag flies at half staff outside the US Holocaust Museum, a day after a security guard was killed. Photo from AFP.
Murders in the ‘Cathedral’

It is clear that we need to strengthen that twinge of horror at ‘religious violence’ into a torrent.

The Holocaust Museum murder and the murder of Dr. Tiller at his church in Wichita share several characteristics:

1. Both men who have been accused of the murders have long histories of involvement with ultra-right-wing political-religious groups like the Christian Identity movement.

2. Both might, therefore, have been labeled “Christian terrorists” as various other murderers have been labeled “Muslim terrorists.” So far as I know, this has not happened. I might add, “Thank God” for this restraint IF this meant we were abandoning that kind of labeling for every such incident. But on the other hand, there is a seed of truth in the labels — if we applied them to the majority religion as well to as the others. There is, after all, a strand of blood woven in the fabrics of all religious traditions.

3. Not only did the alleged perpetrators base some claim to legitimacy in their religious beliefs, but both attacks were aimed at sacred places: the Lutheran church in Wichita, one formally designated “sacred” by our customs; the other, the Holocaust Museum, treated essentially as a place of pilgrimage and awe even more than as a place of education.

4. So in a deeper sense than the labels, we see that the mysterium tremendum that is at the heart of religious experience is somehow engaged in these murders.

We call it “playing God” when people kill other people. (Does anyone call it “playing Satan?”) Even though all our religious traditions (even Buddhism: see under “Sri Lanka”) have streaks and strands of blood woven in their fabrics, even though we often pretend “our own” is exempt, most of us experience a special twinge of horror when religion is invoked as the justification for murder and when a “sacred” place is the scene for murder.

How can both these impulses — the impulse to celebrate our own “god” through murder and our impulse to be horrified by violence in God’s Name or in God’s Place — co-exist within us?

It is because each tradition passionately teaches community in celebration of the One. Then proponents of each tradition meet other folks who claim also to be honoring The One but have a totally different set of words, symbols, metaphors, practices. THEY must not only be wrong about their connection with the One; they must be lying about it. Demonic falsehood!

It is clear that we need to strengthen that twinge of horror at “religious violence” into a torrent. Every one of our traditions needs first to unpeel the truth of its own bloody streaks — in bloody texts and bloody actions — and do penance for them.

And after looking our selves in the mirror, each of our traditions, our communities, needs to make much clearer its prohibition on violence not only within the circle of its family but toward us all, each other. No more chaplains hired by the military, but independent clergy challenging each soldier to stop killing. Congregations that observe Memorial Days and Armistice Days by mourning not only the dead but the system that killed them — not by whipping up the glamorous sentiments intended to shovel still more bodies into a future furnace.

May the One Who makes harmony in the ultimate reaches of the universe teach us to make some harmony within ourselves, among ourselves, for our own tribe and for all the unique and glorious tribes that You have shaped upon our planet.

[Rabbi Arthur Waskow, a regular contributor to The Rag Blog, is director of The Shalom Center; co-author, The Tent of Abraham; author of Godwrestling — Round 2, Down-to-Earth Judaism, and a dozen other books on Jewish thought and practice, as well as books on U.. public policy. The Shalom Center voices a new prophetic agenda in Jewish, multireligious, and American life. To receive the weekly on-line Shalom Report, click here.]

This entry was posted in Rag Bloggers and tagged Religious Fanaticism, White Supremacists. Bookmark the permalink.

1 Response to Rabbi Arthur Waskow : Murders in the ‘Cathedral’