Health Care Blackjack : We Need an Ace from Obama

Posted on September 5, 2009 by Thorne Dreyer 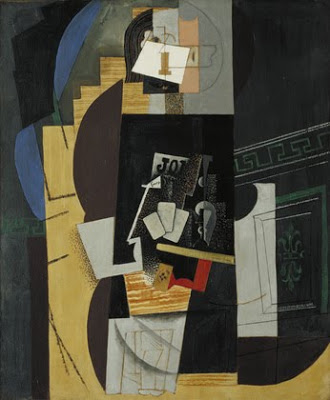 The Card Player by Pablo Picasso / MoMA Collection.
The stakes are high:
The President and health care reform

I have great concern about whether the President will take a principled stand in favor of a true and unfettered public option.

In my younger days, in the days of the two dollar table, I would on rare occasion enter into a game of blackjack. In some odd way, these recollections entered my consciousness when I became aware that the President is going to address a joint session of Congress on the subject of health care.

I now am transported back to the table with two cards face up, both of them fives. The croupier awaits my decision to take a hit. If I get an ace, if the President unequivocally announces that he will fight for a decent public option, i.e. Medicare For All, I win. If I am dealt a six, the game is over, the President has conceded to the insurance cartel, the pharmaceutical companies, and the for profit nursing homes and hospitals.

The second option will force those of us who have stood by the nation, the welfare of the American people, the cause of reason, to fold our cards and depart, and hope that the progressive members of the House of Representatives will vote against a bill that is a farce and a concession to the corporations that appear to control both the President and the Congress.

Better the public, which in its lethargy and lack of inquisitiveness to find the truth, continues to suffer under the current system of health care rationed by the insurance industry, under a system where the insurance industry denies the physician his sacred duty to give appropriate care to the sick and injured, where a minimum of 18,000 Americans die each year for lack of health care.

It would seem overly optimistic to expect in the near future that the United States will rise from 26th place among nations of the world, and adopt a health care system approximating that of France, Germany, the Netherlands, or the Scandinavian countries. All these provide decent health care from cradle to grave, with free choice of physician, dentist and hospital and/or nursing home. Care is not rationed as the spokesmen for the corporations would have us believe. Indeed you may well have to wait 6-8 weeks for a total knee transplant for an arthritic knee that has been a burden for many years; however, for an acute illness, or an emergency, you receive immediate care without having to waste time to give a receptionist your insurance information.

Take the oft retold story of the Canadian woman who ostensibly was informed in Canada that she would have to wait a year and a half to have surgery for a brain tumor. She ended up at the Mayo Clinic in Jacksonville where the surgery was done shortly after arrival. The problem is that this lady did NOT have a brain tumor. Rather than a malignancy she had a small congenital cyst in the region of the pituitary gland which over a matter of years might impinge on the optic nerve and cause visual problems. Yet the American public was totally deceived and the media, save for rare instances, did not correct the distortions. Really! One wonders who indeed paid her bill at the Mayo Clinic.

I have great concern about whether the President will take a principled stand in favor of a true and unfettered public option. Thus far he has equivocated, dealt in secret with the pharmaceutical companies, and reportedly has arrived at a ten year arrangement with them. He has had extensive meetings with the health insurance industry, the AMA, AARP, and those who oppose a public option but are in favor of the nebulous bipartisan “health care reform.” By and large physicians groups, nurses organizations, labor unions, and medical academic organizations have been shut out of the discussions, save for a rare photo-op.

Physicians for A National Health Care Program has been developing a plan for a public insurance system — not government managed, but managed by the physicians and representatives of their patients — for the past 30 years. To date this group has been largely ignored, in spite of the fact that their plan would reduce national health care costs by 30-40%, and provide each and every person health care of their choice from cradle to grave. The reason this plan has been ignored? The insurance industry would suffer, thus depriving their executives of multimillion dollar incomes and bonuses, and reducing them to the level of normal profit making businesses. Still, they have had it quite good for the past 30 years.

President Obama has been compared on occasion to President Franklin D. Roosevelt. Absurd… FDR came to the presidency with a long history of public service in the family. His uncle, Teddy Roosevelt, as a Republican had been a “trust buster,” taking on the monopolistic corporations of that era. He broke with the Republican Party to stand with the people as a candidate for president from the Bull Moose Party.

FDR followed in his footsteps, serving in the Department of the Navy in World War I, being elected a state senator and later governor of New York. When he was elected president in 1932 he did not waver, he did not bow in supplication to his political opponents, he did what he felt was in the national interest. Sometimes the President won, other times he lost; however, he unequivocally did what he felt was in the interest of the citizens of the country, and did not bow to corporate power. President Obama appears to feel insecure, and panders to those who obviously dislike him intensely, accomplishing nothing, and leaving those progressive, thoughtful folks who supported him hanging out to dry.

Health care has become the ultimate test for Obama — and we can be legitimately concerned after his visit to Montana where Governor Schweitzer, in his introduction, spoke up for single payer/universal care, and obviously nettled Obama, according to a report by the state coordinator of the Progressive Democrats of America. It seems the President was unhappy with the governor’s allusion to excellent health care in neighboring Saskatchewan.

One wonders if the President is following a pattern of concession to special interests as occurred with the Wall Street bailout, the apparent lack of concern about who was behind the so called CIA torture scandal (remember the Nuremberg Trials of 1945), the concessions to the Dole and United Fruit interests in the Honduran coup, the approval of continued snooping on domestic communications, and most of all, the continued support for an increasingly unpopular war in Afghanistan which lacks a well defined rationale and/or exit strategy. Does he remember President Eisenhower’s advice regarding the industrial/military complex?

I would like to see Mr. Obama disavow the Christian extremists interjecting the end-of-times foolishness into the debate — as exemplified by “Pastor” Rick Joiner, a South Carolina evangelical who bases his spiritual authority, according to his website, on being transported to Heaven for an extended conversation with Jesus. (The Washington Spectator, September 1, 2009) “Pastor” Joiner has informed his believers, through his Liberty Council, that national health care would lead to euthanizing senior citizens as took place in Nazi Germany under Adolph Hitler.

This charlatan also has continued to inject the abortion issue into the debate. No bill in either house has mentioned abortion, which is prohibited in any event by The Hyde Amendment, passed some years ago, forbidding government funds to be used for abortions. This abortion thing is a fraudulent issue designed to mobilize the wingnuts. I am conversant with the PNHP suggestions for national health care and the issue of abortion has never been mentioned and in probability never thought of in their plans.

Obama must disavow these extremist folks, whose foolishness is subsidized by the insurance industries, and be forthright with the American people. He should know that the teabaggers, Birchers, etc., will never follow him, since their dislike has nothing to do with policy but with a deep seated hatred of an educated man of mixed race achieving the presidency. They dislike walking down the street hearing foreign languages spoken; they dislike the fact that Obama believes in sexual equality; they believe that Obama caused the financial depression, when in reality the neo-liberal economics of George Bush was responsible.

Mr. Obama must forget this foolishness regarding “bipartisanship.” The followers of Rush Limbaugh, Bill O’Reilly, Sean Hannity, and Glen Beck will never accept him nor believe him; however, the remaining 60-70% of the American public deserve a forthright discussion. It is time to face issues head on, as did FDR. Obama must show the courage to take on the Blue Dogs who in the last election cycle received $122,370 from their corporate contributors. He must face the fact that members of the Senate Finance Committee have received millions from the health care industries.

If President Obama cannot take up the mantel of leadership one can anticipate mass defections from his progressive base, and his being defined in advance as a one term president. (I have already removed my Obama bumper-sticker.) He must voice support for the House Progressive Caucus and back them in their goal of obtaining a true, undiluted, government option, as part of health care reform, We who desire single payer realize that no mere mortal can alone defeat the corporate interest.

Once again, it’s the special interests against the people. Thornstein Veblen addressed this in his “Theory of Business Enterprise” written in 1904, when he noted: “The big businessman, uninterested in anything but the amassing of money and the accumulation of power, was actually the enemy of his enterprise. He was concerned with earnings not with values, with prices rather than goods. Profit-hungry moguls sabotaged production and held the common man down by the harsh law of diminishing returns.” Veblin as he continued, appealed for a new set of controls, for a society of engineers who recognize the social use of our machines.

Think about it. The Religious Right rails against large government and “government interference,” yet continues to push for an anti-abortion amendment to the Constitution. These folks seem to have a continuing unnatural level of interest in human genitalia!

Our nation is indeed at a crossroads.