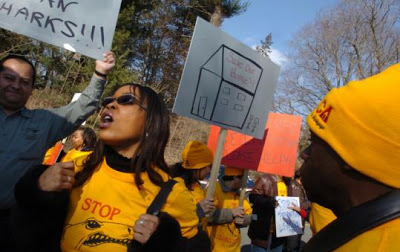 ‘Sporting bright yellow shirts that read, “Stop Loan Sharks,” protestors demanded more accountability from the CEOs of the financial institutions responsible for the millions of unaffordable mortgages in the state and across America.’

Hundreds of people trying to save their homes from foreclosure flocked to Connecticut’s wealthy Gold Coast this weekend to give financial kingpins a piece of their mind.

Stamford sits in the midst of one of the nation’s wealthiest areas, and among the regions particularly hard-hit by the housing market collapse. Nearby Greenwich and other suburbs are home to many of Wall Street’s wealthiest executives and financial managers.

Homeowners are fed up – and many are frustrated that those who lead the companies that gave them their subprime mortgages live in luxury while they struggle so hard to meet their loan payments and not fall behind.

On Sunday, hundreds of angry homeowners and volunteers traveled in vans and minibuses and protested outside Morgan Stanley CEO John Mack’s multi-million-dollar mansion to tell the wealthy finance czar how they really feel.

The group, led by Neighborhood Assistance Corporation of America (NACA), also went to Greenwich Finance CEO William Frey, among others, as part of what NACA calls the “Predator’s Tour.”

Sporting bright yellow shirts that read, “Stop Loan Sharks,” protestors demanded more accountability from the CEOs of the financial institutions responsible for the millions of unaffordable mortgages in the state and across America.

“We can’t let them live quietly in a lap of luxury while they throw hard working Americans out on the street,” NACA explains on its Web site. “This action is within our legal rights as Americans to peacefully protest and meet with those who control our family’s livelihood.”

NACA coordinated the protest as part of its “Save the Dream” forum – a weekend of workshops to counsel stressed-out homeowners on ways to refinance their mortgages amid the nation’s housing market meltdown.

Event organizers expected thousands to show up throughout the weekend for financial advice and mortgage assistance. NACA has helped restructure thousands of mortgages to arrangements homeowners can afford.

None of the protestors were arrested.

View a video of the demonstration and a slideshow featuring some of the financial CEOs that NACA says prey on homeowners here.